Shortly after Sony revealed their selection of free PlayStation Plus games for this coming November, Microsoft has laid out their own gaming freebies for their premium Xbox Live Gold members. Once again, three new offerings are on the docket, with one all-new indie game release for Xbox One, and two full retail offerings for Xbox 360.

The new Xbox One reward and first of two Xbox 360 rewards will go live this coming Saturday, November 1st. At that point, last month’s offerings on both consoles will cease to be free rewards, and will go back to their original price scheme. Thus, if you have yet to redeem Crimson Dragon or Darksiders II for Games with Gold, you have until this coming Saturday to do so. Chariot will remain a free Games with Gold reward on Xbox One for this November, if you didn’t redeem it during October.

The lone new Xbox One freebie this month is Volgarr the Viking, releasing for the first time for Xbox One on November 1st, a retro-inspired 16-bit side-scroller by Crazy Viking Studios. The game harkens back to cutthroat action classics of the Super NES and Sega Genesis, giving players only a couple of lives, and only a few buttons that can be used to achieve victory. Volgarr the Viking was originally released for PC last year, where it received positive reception. The game will be available to redeem free for Xbox Live Gold members throughout the entire month of November, should they own an Xbox One.

For Xbox 360, the first of two Games with Gold for November is Viva Pinata: Trouble in Paradise. which will be available from November 1st through to November 15th. This Xbox 360-exclusive virtual pet game is the sequel to original Rare-developed hit, Viva Pinata, tasking players with fostering and raising not only living pinatas, but also the garden they live in, in order to restore the information in a pinata database that was destroyed by the nefarious Professor Pester. 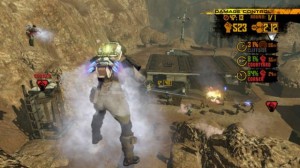 After November 15th, Viva Pinata: Trouble in Paradise will be replaced with the second Xbox 360 freebie, Red Faction: Guerilla, which will be available from November 16th to November 30th. In this open-world third-person shooter, players take control of freedom fighter, Alec Mason, fighting to liberate the people of Mars from the oppressive government of Earth. The game has a key hook of allowing players to heavily alter and destroy the environment with a specialized Geomod Engine. On top of its Xbox 360 version, Red Faction: Guerilla is also available for PlayStation 3 and PC.

This continues to be a reasonably solid month for Games with Gold, with one enjoyable indie for Xbox One and two aged, albeit well-designed retail offerings for Xbox 360. Red Faction: Guerilla’s gamer appeal may be a little more widespread than that of Viva Pinata: Trouble in Paradise, but as free rewards, both are absolutely worth trying out, and can be plenty fun!