Are you scared by the idea of demon-possessed records? Well, Constantine is going to do its darndest to scare you with them this week, as a demon-possessed acetate compels its listeners to listen to it, then violently murders them.

In any case, this episode, questionable macguffin aside, had some new key bits of Constantine’s backstory developed. An on-again/off-again villain from the comics made his debut, and a mention of Constantine’s ultimate nemesis was made, as well as a great bit of fan service in the mention of Constantine’s former band from the Vertigo/DC printed panels, Mucus Membrane. Beyond this though, the episode was more interesting than impactful, and Constantine himself still feels like the best thing about the show at this point.

The acetate’s first victim happens to be a former buddy of Constantine’s, the former music producer of Mucus Membrane, a band that even Constantine admits wasn’t that good, and was simply put together so the guys in it could get laid. This compels John, Chas and Zed to investigate, soon learning that former backup singer, Jasmine Fell has made a deal with the devil, and believes she can save her soul by turning over the cursed acetate to demonic forces.

The backstory behind the acetate was cool, particularly as it’s recounted by the dying old man that used to own the record studio where famed blues musician, Robert Johnson inadvertently recorded the acetate during a demon attack. The moment that followed was especially cool though, where he codes and Zed rushes off to get the nurse, only to have Constantine watch as time stops and Manny appears, being his playful self and gently touching the man’s forehead, which instantly flatlines him.

For such a minor character, Manny is one of the only other characters besides Constantine himself to leave such a great impression in every scene he’s in. I hope the show keeps making him pop up every now and again for these neat little events, reminding us that Heaven is always keeping an eye on John Constantine.

This means that Chas and Zed were a bit on the boring side this episode, with Zed feeling significantly less interesting than she was during her debut last week. Both of them just kind of tagged along with Constantine and didn’t say or do much of value. Zed even regressed a bit more to the Liv persona (though not completely), as she came off as this uninitiated trainee that’s still gawking at Constantine’s bag of tricks.

What a bag of tricks it is too, as Constantine makes use of more magical tools than ever this episode, including tracking device coffin nails, form-shifting playing cards, and a dead man’s hand that can be lit like a candle to talk to departed souls. Constantine’s introduction this episode was similarly off-the-wall, as Chas brings Zed into their safe house, only to find Constantine covered in blood and writhing around, spouting nonsense, just so he can learn a spell. Talk about a dysfunctional roommate!

Naturally though, I haven’t yet talked about the big introduction this episode, that being one of Constantine’s most recurring foils and frenemies from the comics, Papa Midnite! Michael James Shaw is another standout as Papa Midnite, a lively witch doctor who wants the acetate for his own unknown motives, and is behind the soul trickery with Jasmine Fell this episode. The dynamic between Midnite and Constantine is already very tense and enjoyable, particularly after the first mentions are made of the First of the Fallen (read: Satan), setting up a much larger foe for Constantine down the road.

Midnite eventually leaves Constantine tied up and slowly bleeding out, saying that he’ll survive as long as his men get ahold of the acetate. Of course, maybe Midnite shouldn’t have relied on his bumbling goons to fetch such a dangerous artifact, as this soon leads to the men listening to the record, getting possessed by it, and going across town for more fatalities. This does lead to Constantine almost getting his shoes and jacket stolen by a homeless person though, leading to another awesome Manny moment as the angel comes down to give Constantine some divine encouragement, in his own dick-ish way. Oh, Manny, never change!

This led to some interesting and somewhat goofy final moments, where Constantine has to try and protect himself from the acetate by blaring Sex Pistols with some earbuds, and subsequently having to be bailed out by Papa Midnite and his enchanted Winchester rifle, before sending the acetate and Midnite’s possessed goons to Hell. This sequence also included the only interesting thing that Chas did all episode, driving into a power box to shut down the signal so that the rest of town couldn’t hear it.

Midnite’s soul broker then had to come back and eat the contract he made for Jasmine Fell’s soul, which she made in order to save her husband, who was dying of cancer. Yes, the broker must physically eat the contract to cancel it. That’s quite an interesting method, but it was oddly funny to see, particularly after Jasmine’s husband gives her hope that the better cancer treatments of the modern world will give him a better chance at life regardless. 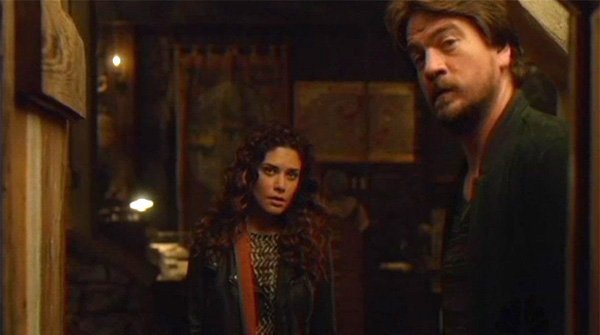 “The Devil’s Vinyl” felt like another by-the-book case for Constantine, or at least as by-the-book as this character and his strange world can get. This episode at least hinted toward cooler developments to come though, even if it feels like Constantine’s main allies still need some tweaking before they’re as cool as the more divine forces, and the show’s title character.

Constantine 1.3: "The Devil's Vinyl" Review
"The Devil's Vinyl" presented another small-scale procedural-style case for Constantine and co., elevating itself on the great introduction of Papa Midnite, and the kooky magic of its lead character.
THE GOOD STUFF
THE NOT-SO-GOOD STUFF
2014-11-08
78%Overall Score
Reader Rating: (0 Votes)
0%