Death’s about to get prettier. 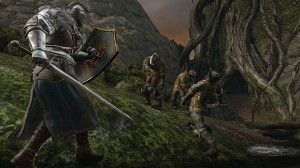 Bandai Namco has just announced that an enhanced edition of this year’s beloved masochistic action-RPG sequel, Dark Souls II, will launch for both PlayStation 4 and Xbox One on April 7th, 2015, right at the start of the 2016 fiscal year, beginning for the game industry on April 1st, 2015. The game formerly launched this past March for Xbox 360 and PlayStation 3, and expanded to PC this past April. The enhanced re-release will be called Dark Souls II: Scholar of the First Sin.

Dark Souls II: Scholar of the First Sin is headed to PC, Xbox 360 and PlayStation 3 as well, on top of the new PlayStation 4 and Xbox One editions. Bandai Namco has clarified however that the next-gen versions will include exclusive features and bonuses, as will playing the PC version on DirectX 11 PC’s. These bonuses obviously include improved graphics, but also new enemies, altered enemy locations, and an increased player count for multiplayer sessions, on top of all three DLC chapters bundled with the game for free. Dark Souls II: Scholar of the First Sin will still pack in the three DLC expansions for free on Xbox 360, PlayStation 3 and DirectX 9 PC’s, though the other bonuses will not be included on these last-gen platforms.

The enhanced re-release will also launch alongside update 1.10 for those who already own the original release of Dark Souls II for Xbox 360, PlayStation 3 or PC. The update will add in a new quest, along with re-balances to online play and matchmaking, and expanded story events.

A famously difficult action-RPG, Dark Souls II has players exploring the world of Drangleic. While it does take place in the same universe and canon, Dark Souls II bears no direct story connection to the previous Dark Souls, and is a largely standalone story. It features both co-operative and competitive multiplayer gameplay, along with reliably tough battles against vicious monsters. Dark Souls II also received immense critical acclaim in its original build across all three platforms, though some criticized its seemingly unfair levels of difficulty during certain instances.

Keep surviving Eggplante for all news and updates on the Dark Souls games.