Some leaked video assets out of Ubisoft were shared with popular news site, Kotaku, confirming that the next Assassin’s Creed game is code-named, ‘Assassin’s Creed: Victory‘, which may or may not be its final title. The game will be set in the 18th Century as well, specifically in Victorian London, England. Yes, it seems like the oft-demanded Feudal Japan setting still isn’t in the cards for this series.

While the main character and specific plot details about the game aren’t currently known, the video demo that was meant for Ubisoft’s internal offices showed off a hooded assassin accepting a contract to assassinate someone inside of a carriage. After battling on top of the moving carriage for a bit, the assassin then pursues the fleeing target using a grappling hook, an all-new mechanic for the series, and finishes him off.

The footage, which is obviously unavailable for the public to view at Ubisoft’s request, was apparently rendered in-engine using actual gameplay footage, not pre-rendered CG.

Ubisoft confirmed that the Assassin’s Creed: Victory leak to Kotaku is legitimate, issuing a statement that they are disappointed for the fans and the developers that the game was leaked before it was meant to be announced. They claim that their number one priority right now is fixing Assassin’s Creed: Unity’s well-publicized launch issues, but that they welcome anticipation of their games, and urge fans to wait for official announcements leading up to the game’s 2015 release. 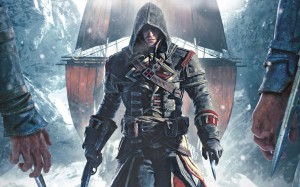