For those still on the Wii U’s case that there aren’t enough games for the console, now is your time to zip it. This year alone has seen the release of Mario Kart 8, Donkey Kong: Tropical Freeze, and of course, Super Smash Bros. for Wii U.

Nintendo is also offering another, more casual experience for Wii U that is slipping past the radar of many gamers, and it’s called Captain Toad: Treasure Tracker.

The concept for Captain Toad was brought to life in Super Mario 3D World, where quick, Toad-based discovery levels were sprinkled throughout the experience. The style was noticed by nearly everyone who played and people clamoured for new levels based around this style of gameplay. Nintendo decided to deliver an entire standalone game instead.

Announced in their Nintendo Direct at E3 2014, the game launches this Friday, and we’ve put it through its paces to see if Captain Toad does indeed deserve his own game.

As the game was born from Super Mario 3D World, it stands that the graphics in it are nearly identical to those in the former title. That’s saying something wonderful–the original game was a marvel for the eyes–but there could have been more work done to make this an even better-looking title.

The colours are just as bright and vivid as they were before, perhaps more so even, and the game is certainly beautiful. But it’s worth the thought: since the levels in Captain Toad are so much smaller (often as small as 10% of the size of a SM3DW level), could there not have been more effort put into making the entire game that much better looking? Like an expensive restaurant with ridiculously tiny portions. The portions may be small, but they pack a punch you just don’t get at Applebee’s.

There is something to be said for the whimsy of some of the design choices here, though. It is clear that Captain Toad isn’t as serious a title as 3D World, and the developers certainly make that clear. For example, levels in Captain Toad need to be rotated to be seen in their entirety, and that leaves a lot of nooks and crannies undiscovered on the first play through of the game.

At the start of each level, Toad yells “ready for adventure!” It’s annoying as hell after the first three times he does it. Luckily, that’s really the only problem with the audio in Captain Toad.

The classic Mario themes are there, but they’ve been changed to add a slightly more Toad feel to it all. As with 3D World, there are jazzy bits, some slower melodies, and some new tunes to boot. Nintendo manages to keep everything well within the Mario realm and tie everything together beautifully.

With that said, if Nintendo was looking to break off from the traditional, this would have been the place to do it. Maybe next time.

With the rampant comparisons to Super Mario 3D World in the visuals and audio departments, this is where Captain Toad really comes into its own. One of the hallmarks of the Mario series is that each character has different traits. Mario is a jack-of-all-trades, Luigi can jump high, Peach can hover, and Toad is strong and fast.

While certainly strong in this game, there is nothing indicating that Toad is fast. In fact, he’s almost painfully slow. And he can’t jump. In fact, it might be a miracle that Nintendo managed to make a fun playable character out of Toad.

The game is much less a platformer and much closer to that of a puzzle. Within the rotating worlds of Toad’s adventures, the player will hit switches to spin blocks, use the touchscreen to rotate shields, protecting Toad from a dragon’s fire breath, and even redirect Bullet Bills to open up new areas.

Toad can also live underwater indefinitely, though he sinks right to the bottom (no jumping also means no swimming), leading to yet more interesting puzzle combinations.

Some levels break free from the box-like structure of the vast majority of the experience, opting for on-rails levels where the player character takes aim at enemies and coins with a radish-flinging cannon. It doesn’t happen often, but there are enough levels like this to mix up the variety every once in a while.

Given that Toad can’t jump, there is still some great verticality in a lot of the levels here. Through the use of ladders, cannons, and moving platforms, Toad can end up twelve levels above or below where he started. In one level, he uses the super hammer to bore his way through the ground and find the star at the bottom.

Most of the levels are of the smaller sort, and that is a bit of a bummer because there could have been much more here, but the puzzle mechanics almost make up for the size of the game. Levels are densely-packed with ingenuity and there are some seriously well-designed traps here.

Complete with imaginative bosses, Captain Toad: Treasure Tracker has a few surprises here and there, but doesn’t stray too far off the beaten path, even though that’s exactly what this game was designed to do.

There is one more caveat for gamers looking to get into Treasure Tracker and that is to understand exactly what they’re getting. This is not a long game. Of the three chapters, the first third of the game was completed in under an hour. Granted, the game picks up in difficulty later on, but the entire experience is around the three-hour mark, not including 100% completion of all gems and secrets.

Luckily, Nintendo has priced the game reasonably below the $40 mark, indicating it isn’t quite a huge experience. Looking at value, however, it’s priced the same as the new Pokémon titles on Nintendo 3DS, and those are much meatier experiences, as one might expect.

Nevertheless, there is value here–and more than we’re letting on due to a review embargo–so if a small but tailored experience is what you seek, you might just find it in Captain Toad.

The story didn’t do much for us in Treasure Tracker. Here’s why: 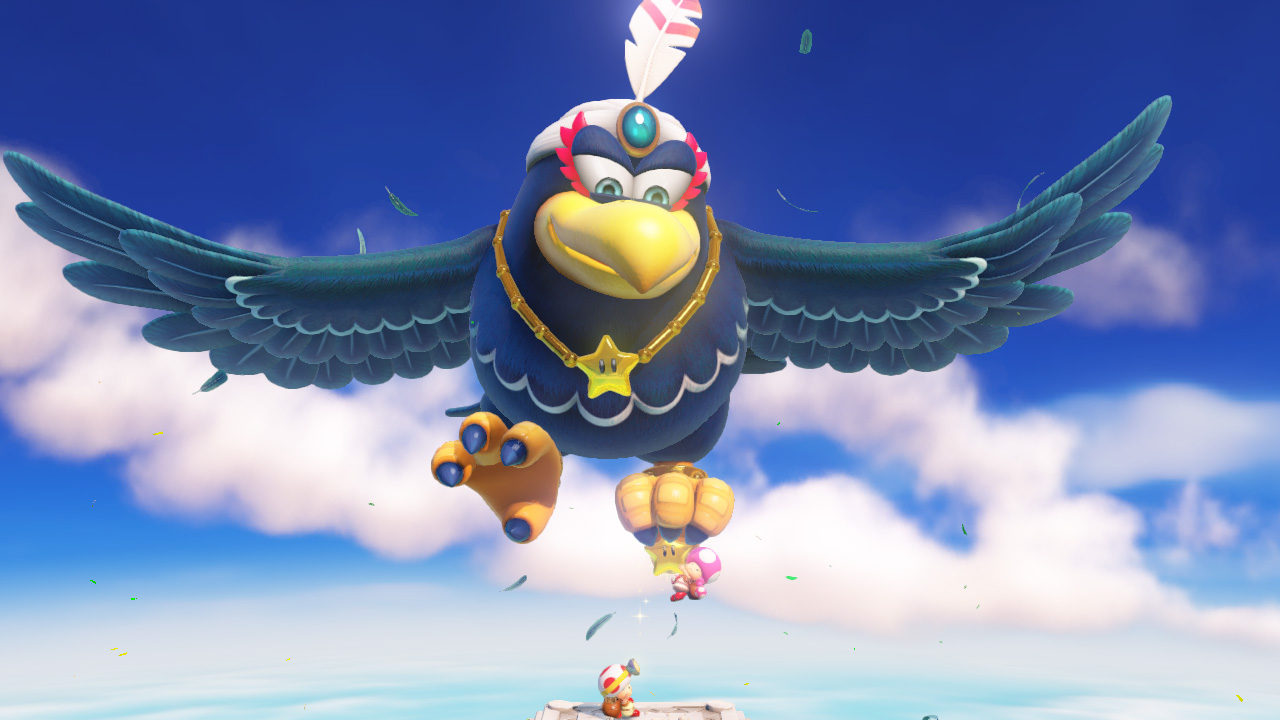 The experience of Captain Toad: Treasure Tracker was overall pleasant. It’s not the hidden gem we thought it might be when it was announced during E3 this year, and we’re thankful that it’s been priced reasonably for what is offered.

There’s not a ton of content here, but what is here is pretty sweet. Ingenuity, design, and craftsmanship all take precedence over scale, though whether that’s entirely worth it might be up to the player in the end.

If all we get out of Captain Toad: Treasure Tracker is the beginning of a Nintendo that creates new experiences around already existing characters, then Toad has accomplished exactly what he needed to. Nintendo could have broken away from the mould even more with this one, but what a great start this is.

Captain Toad: Treasure Tracker Review
Captain Toad: Treasure Tracker has a few surprises here and there, but doesn't stray too far off the beaten path, even though that's exactly what this game was designed to do.
VISUALS80%
AUDIO75%
GAMEPLAY85%
STORYLINE50%
The Good Stuff
The Not-So-Good Stuff
2014-12-03
73%Overall Score
Reader Rating: (0 Votes)
0%