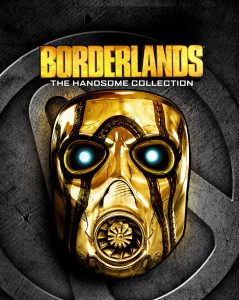 Borderlands: The Handsome Collection will include Borderlands 2 and Borderlands: The Pre-Sequel!, along with all of their DLC, included with a Season Pass or otherwise, right in the package, which will retail for $59.99 USD. The name of the next-gen bundle is a reference to fan-favourite villain, Handsome Jack, whose story is front and center in the two games. Both games were previously made available for PC, Xbox 360 and PlayStation 3, with Borderlands 2 also releasing on PS Vita last year. Sadly, the original Borderlands game won’t be part of the package.

The Borderlands series places heavy emphasis on co-op gameplay with squads of up to four players online, though can be played by oneself as well. The new PlayStation 4 and Xbox One remasters will include the ability to play with four players at once locally for the first time, unlike the previous Xbox 360 and PlayStation 3 versions, which only allow two players locally. Being a hybrid of first-person shooter and action-RPG, the Borderlands series tasks players with exploring the treacherous planet of Pandora in search of treasure, with billions of potential randomized guns being procurable along the way, and four diverse player characters with different specialties on offer for players. 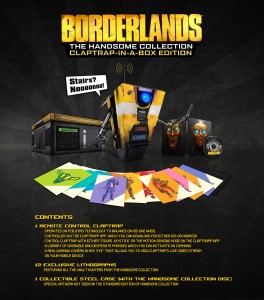 Avid collectors may wish to keep an eye out for the super-special “Claptrap-in-a-box” edition of Borderlands: The Handsome Collection as well. Only 5,000 of these packages will be made, and they will contain an exclusive remote-control Claptrap replica, complete with Claptrap’s familiar voice, which can be controlled with a free app for iOS and Android mobile devices. It will also include 12 exclusive lithographs, and an exclusive steel game case. This special edition will retail for $399.99 USD, and is currently available to pre-order on Amazon.

Keep looting Eggplante for all news and updates on Borderlands.