Taken 3 is an action movie sequel so gratuitous, so pointless, and yet so overblown, that you can’t help but chuckle at it. It’s another follow-up clearly made to cash in on the surprise success of Luc Besson’s original 2009 action movie sensation, Taken, though at the very least, this one isn’t boring, which is more than one can say for the dismal Taken 2 from 2012. It’s also at least mercifully marketing itself as the conclusion of a trilogy that marks the final chapter for Liam Neeson’s gruff, particularly skilled Bryan Mills, so hopefully the franchise won’t embarrass itself any further, box office profits be damned.

To be sure, Taken 3 is an unnecessary sequel that predictably fails to even hold a candle to the original. At the very least though, it is an improvement over Taken 2, mainly because it’s at least not afraid to revel in its own absurdity at times. Even 20th Century Fox and EuropaCorp appear to be admitting that these pointless sequels are a joke here, so why not play them off as one, so audiences can at least have fun with them? After all, there’s no way that these absurdly frequent explosions, not to mention ridiculous scenarios from a beer store gunfight to a big duel with a main villain as he prances around in his underwear, were written and meant to be enjoyed with a straight face.

Thus, I have to commend Taken 3 for at least being fun to watch, even if it’s still not very good in terms of objective quality. It wisely sweeps the overly serious and incredibly tedious Taken 2 under the rug for the most part, and just tries to go back to the raw badass appeal of the original, though substitutes its lack of reasoning for some potent goofy charm. All in all, it’s actually a decent note to send the series out on, even if it’s still a forgettable and dopey follow-up that actively celebrates its own redundancy.

If you like undemanding action movies, and that all sounds fine and dandy to you, then Taken 3 makes for some solid entertainment as you try to trudge through the dreary January weeks of movie desolation.

Bryan Mills is back with his particular set of skills, and no matter how idiotic the material around him gets, it’s a real credit to Liam Neeson’s talents that he’s still a credible badass here. Neeson’s growling ex-CIA man and hard-hitting enforcer of family justice is as enjoyable to watch as ever, and gives Taken 3 whatever credibility it actually deserves as it moves from one ludicrous set piece to the next.

Equally surprising is the presence of Forest Whitaker, who is either slumming it for a payday, or just wanted to kick back with a silly, undemanding role. Either way, Whitaker’s OCD inspector, Frank Dotzler simply exists to pursue Bryan and be the voice of reason in a movie that is clearly devoid of reason. It’s an unenviable task, but Whitaker makes the character of Dotzler quirky enough to be an enjoyable presence, carrying around a chess piece everywhere for no discernable reason, and having the superhuman detective skills necessary to keep pushing the movie’s very flimsy plot forward.

Several other familiar personalities return from the former Taken movies as well, including Maggie Grace as Bryan’s daughter, Kim, Famke Janssen as Bryan’s ex-wife, Lenore, and Bryan’s former posse of over-the-hill operatives who can still kick ass. The only one that appears to have been recast is Lenore’s current husband, Stuart, who was played by Xander Berkeley in the original movie, and didn’t even physically appear in the second, but is now portrayed by Dougray Scott in the third, reuniting him with Janssen, his co-star on Netflix Original Series, Hemlock Grove.

Even with the efforts of the supporting cast, this is entirely Liam Neeson’s show, and fans probably wouldn’t have it any other way. Janssen in particular is barely in the movie, since Lenore is murdered as the inciding incident (this isn’t a spoiler, as the trailers splashed this big reveal all over them), with Bryan framed for the killing, and Kim yet again serving as being a mere plot device when the story needs her, much like Dotzler. There is actually a great attempt at a big twist with another character, but it’s feeble, often non-sensical, and you can see it coming from a mile away. Hell, you might have already pieced together who is not what they seem just from reading this paragraph.

The rest of the characters are just nameless goons and cops for Bryan to dispatch on his path to finding justice for his dead wife. There’s barely anything to the cast at all in Taken 3, who all orbit around Liam Neeson’s hard-nosed appeal, and that’s kind of the point. After all, who wants to think in a movie where Liam Neeson almost blows up an entire car park by dropping a vehicle down an elevator shaft, which must have been filled with dynamite off screen? Logic has no place in these redundant action sequels, son!

Taken 3’s entire plot could fill a cocktail napkin. This time not even bothering with classy European locales like Paris or Istanbul, Taken 3 is content to set itself in good old California. Bryan’s family yet again attracts some bad luck, with Lenore being murdered right as she’s thinking of going back to her former husband (how dramatically convenient), and Bryan having to clear his name after he’s suspected of the killing, being framed by the real bad guys, who do a spectacularly awful job of hiding themselves. No wonder Bryan just chops through all of them in less than two hours!

It’s easy to get the sense that 20th Century Fox and EuropaCorp have firmly run out of ideas for proud cash-in sequel, Taken 3, but that at least allows them to concoct a bare-bones story that will provide entertainment, even if no real substance. Taken 3’s borderline juvenile plot makes for great action movie indulgence for its own sake, with even the emotional moments belly flopping with a giddy thud, as if even they are not trying.

Even an arc where Kim learns that she’s pregnant in the first moments of the movie, and struggles with how to tell the ever-neurotic and controlling Bryan, feels so carefree. By the time Bryan does inevitably learn that Kim is pregnant, he predictably reacts to it with a completely out-of-character shrug, since this is a silly action sequel, and action men stand by their families because that’s what makes them likable as they’re murdering dudes left and right! 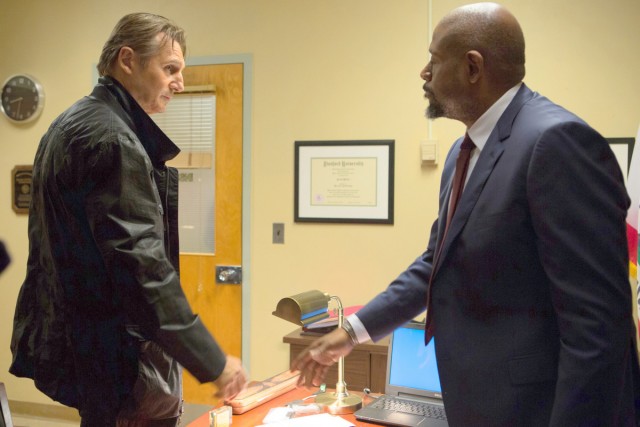 There is nothing to examine with the rote, assembly line story of Taken 3, but thankfully, the movie has the good sense to be self-aware. Unlike Taken 2, which was completely in denial about being a redundant action sequel, and thus took itself far too seriously, Taken 3 is just content to have fun with an appealing action man. It doesn’t care about making sense, or even telling a worthwhile story, but in a way, it almost feels like an apology for the plodding slog of Taken 2. As a result, it makes up for that movie’s tedium with a more fun and proudly dim-witted follow-up that doesn’t even try to tell a story where it really doesn’t need to.

Olivier Megaton, Luc Besson’s favourite mercenary director, returns to direct Taken 3, after previously helming Taken 2. Given that Taken 3 is far more free-spirited and silly than its strenuous predecessor, Megaton’s overwrought, hyper-stylized direction fits better here than it ever did with Taken 2.

Still, that doesn’t make Megaton’s direction any less messy more often than not. Some of Taken 3’s action shots are overblown to the point of being confusing and sloppy, with some of the movie’s editing being so clumsily done that it’s downright hilarious! Megaton’s penchant for redundant explosions is also alive and well here, and like I said, you’d think that every car and structure in the movie is loaded with dynamite, given the rate that they explode in several instances with no provocation whatsoever. 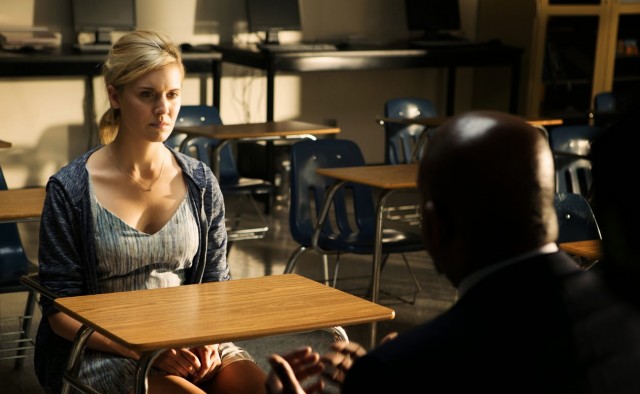 Taken 3 seems to be made for people with the attention span of a goldfish, considering how over-edited and convoluted its action scenes especially are structured, but that makes it all the more easy to enjoy ironically, even for fans of the far better original movie. Taken 3 largely feels like a shallow mess, and one could definitely be forgiven if they wished to wait for it to show up as a home viewing rental, but at least it’s executed as an entertaining shallow mess, which is more than the previous movie could claim. I suppose even progress among redundant sequels and silly direction deserves to be recognized.

Taken 3 is a proud swindle of your box office dollars. It’s a movie that has thrown up its hands, and has simply stitched together some base action movie entertainment that maximizes Bryan Mills’ badass skills for one last (hopefully) hurrah. If you’re a fan of Liam Neeson, and you enjoy simple-minded action flicks, then Taken 3 is easily more recommendable than Taken 2, even if it still widely misses the mark in terms of measuring up to its 2009 original.

For January however, a month that is often packed with garbage movies that studios couldn’t market at any other time of year, Taken 3 at least succeeds by virtue of the fact that it’s a good time. Objectively, it’s not a good movie, being shallow, idiotic and over-edited to the extreme, but the entertainment value is there if you just want to see Liam Neeson bust heads. Again, it’s perfectly understandable if one would want to save some money by waiting to watch this sequel at home with a rental, but it’s nonetheless worth watching for fans, thanks to its simple-minded glee.

Taken certainly didn’t need sequels, nor was it really asking for them to begin with. If you’re going to force an unnecessary sequel to a movie that really doesn’t need one though, at least make said sequel a good time, even if it’s bound not to be very objectively good. Fortunately, Taken 3 succeeds where Taken 2 failed on that note. It’s schlock, but at least it’s fun schlock.

Taken 3 Review
Taken 3 is another redundant sequel that is, objectively, an idiotic mess, though succeeds better than its predecessor at being ironically entertaining in spite of itself, thanks mainly to Liam Neeson's continued badass appeal.
CHARACTERS60%
PLOT60%
DIRECTION60%
THE GOOD STUFF
THE NOT-SO-GOOD STUFF
2015-01-22
60%Overall Score
Reader Rating: (0 Votes)
0%