NOTE: Spoilers from throughout the debut season of Agent Carter are present in this review

Marvel and ABC attempted an interesting little experiment for the extended off-time of Agents of S.H.I.E.L.D. Rather than just bring the show back with all of the others in January, ABC would instead air a shortened eight-episode miniseries that helped to establish the original days of the Marvel Cinematic Universe, directly following from the events of 2011’s WWII-set origin movie, Captain America: The First Avenger. It would also double as leading the charge for female-led media from Marvel Studios, with the series protagonist being Captain America’s lost love, Peggy Carter.

Agent Carter thus represents another significant departure from traditional superhero convention, in that it not only stars a woman, but stars an ordinary woman with no superpowers, making her way through an ordinary setting that also happens to be a period setting. There were a lot of unknowns going into this highly experimental idea, even if it did have a One-Shot short film of the same name included with Blu-Ray copies of Iron Man 3 to draw interest, but did this bold miniseries prove to be another successful vision for Marvel Studios?

Oh yes, it most certainly did! 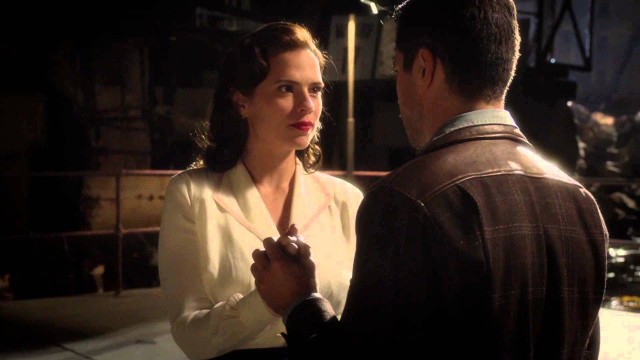 Agent Carter continues to prove that Marvel Cinematic Universe media is far from stagnant, being yet another triumph that storms onto the scene with charm, whimsy, and even a surprising amount of drama. The miniseries doubles as both a way to tease the events that led to the formation of S.H.I.E.L.D., as well as the challenge of Peggy having to move on with her life, after Captain America gets himself frozen in the Arctic after saving the day during the climax of Captain America: The First Avenger.

While the connections to the rest of the Marvel Cinematic Universe beyond the loss of Captain America are pretty loose, Agent Carter still manages some neat tie-ins to the Iron Man movies, the Captain America movies, and Agents of S.H.I.E.L.D. Some may be disappointed that S.H.I.E.L.D. isn’t actually formed during this miniseries, but that just hopefully leaves the door open for more Agent Carter somewhere down the line.

The inciding incident of this debut season comes when Howard Stark is framed for weapons espionage, after the actions of a mysterious Russian organization called Leviathan, which should be recognizable to Marvel Comics fans. Teaming with Howard’s kindly, yet thrill-seeking butler, Edwin Jarvis, Peggy must clear Howard’s name, working undercover around the watchful eye of her own government organization, the Strategic Scientific Reserve (SSR). Treated as a filer and coffee runner, Peggy longs for a return to real peacekeeping, but obviously has no idea what she’s in for, as the SSR hunts for Howard all the while.

The shortened eight-episode run gives Agent Carter an effectively brisk and snappy pace that feels like it makes the show a lot more engaging than it might have been with a full twenty-two-episode order. Plot developments happen more quickly, but it works in the show’s favour, as things aren’t dragged out. Real highlights to this effect include an action-packed mission to Russia with the Howling Commandos in the fifth episode (where we also get our first look at Marvel’s Red Room, where Black Widow was trained), and a quick unmasking of undercover Leviathan agents, which go on to serve as the season’s big villains for the climax.

The only real downside to what’s otherwise a fun and fast-paced miniseries is that the shortened eight episodes also don’t totally capture the scale that is sometimes necessary for Marvel elements like Leviathan. The miniseries doesn’t capture the true scope of Leviathan as a huge, villainous organization by the end, with the real antagonists left to simply be a proto-Black Widow, Dottie Underwood, and a Russian doctor that is later revealed to be the Marvel Cinematic Universe rendition of mind-manipulating Captain America villain, Doctor Faustus. Their plan to use one of Howard Stark’s botched prototypes to threaten New York is a solid one, especially when the eighth episode has a heartbreaking moment of Howard being made to drop the deadly gas himself, believing he is rescuing Captain America, but you really get the sense that Peggy has barely scratched the surface of Leviathan after the eight episodes wrap. Still, hopefully this leaves room for more developments in potential future seasons of Agent Carter.

As for the supporting cast, they’re all very likeable, despite being proudly rooted in 1946-era chauvinism. Being a woman of that time, a big theme of the series is Peggy not being taken seriously by her colleagues, and Agent Carter wisely doesn’t try to shy away from the fact that Peggy is a female protagonist. She’s very much a capable, independent woman with a mission, and doesn’t just feel like a man in a wig and a make-up. Her femininity is a big part of the series, and it’s wonderful how Marvel made that a focus, without overdoing it.

Likewise, Peggy is also wisely not portrayed as cold or heartless at any point. She’s clearly broken up over the loss of Captain America, and her moving on from that is another big focus. This leads to her befriending a kindly waitress, Angie, who also helps her find a new apartment after her original roommate ends up being murdered by Leviathan, and the contrast of putting a rulebreaker like Peggy into a straight-laced girls’ home is pretty amusing, especially when Howard comes to visit. The emotional scenes are at their best for the very end however, when Peggy is given the last remaining sample of Captain America’s blood, and chooses to dump it off of a bridge, saying, “Goodbye, my love.” It was the perfect, heartstring-plucking note to conclude this miniseries on, even if Marvel fans no doubt know that Cap will live again in the present. 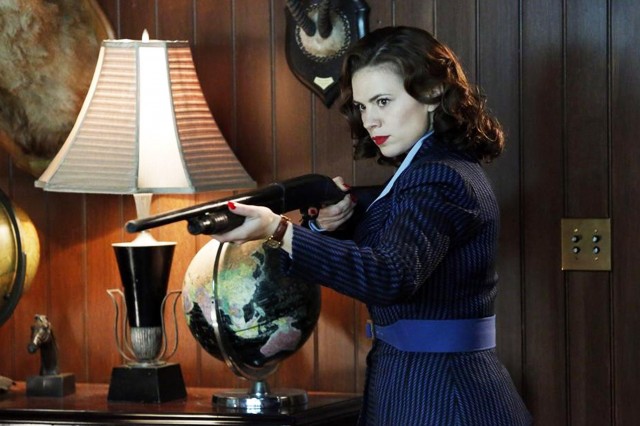 The drama works a little more consistently than the comedy, with some comedic moments being genuinely funny, and some just creating odd tonal confusion in what’s supposed to be a more grounded Marvel miniseries. Still, the rapport between Peggy and Jarvis is particularly entertaining, with James D’Arcy stealing the show as much as Hayley Atwell with his ever-polite, wide-eyed portrayal of Jarvis, again playing well to Peggy’s lack of regard for the approval of anyone but herself.

That said however, the miniseries is still very likeable overall. Even Peggy’s boyish colleagues at the SSR are all given real backstories with heartfelt moments of vulnerability. Even with the shorter run of episodes, audiences will still feel for the ones that die, and the ones that live are characters we get to know beyond the more reprehensible social paradigms of the era. It’s not a bad crew, and again, Agent Carter wisely avoids painting all of the men in the series as simple-minded chauvinists. Yes, they only exist to be outwitted by Peggy in the early episodes, but thankfully, the miniseries doesn’t keep this focus forever, particularly with the SSR eventually capturing Peggy when she becomes implicated in the hunt for Howard, allowing her to confront them directly on how little she is outwardly valued.

Agent Carter opens a lot of great doors for Marvel Studios, delivering a successful female-led series, a successful period series, a successful TV miniseries, and a successful series about a fully human former supporting character with no superpowers. It provides yet another fresh and interesting story for the Marvel Cinematic Universe, delivering outstanding doses of action, drama, humour, and mystery alike. While it builds on the events of Captain America: The First Avenger to a point, it’s ultimately not dependent on having a huge degree of Marvel Cinematic Universe connections to succeed. You don’t ever actually see Captain America, and while you do get nods to the future careers of Iron Man and Cap alike, Agent Carter stands tall on its own merits, without needing to lean on other, bigger pieces of Marvel Studios media as a crutch.

You go, Peggy! Consider me hopeful as anyone for a second season!

Agent Carter: Season One Review
Agent Carter proves to be a smashing success in its debut, one that opens a lot of promising doors for Marvel Studios media going forward, and begs for Peggy Carter's return to the small screen soon.
THE GOOD STUFF
THE NOT-SO-GOOD STUFF
2015-03-05
90%Overall Score
Reader Rating: (1 Vote)
92%