NOTE: This review may contain mild spoilers from the first season of ‘Unbreakable Kimmy Schmidt’. That said, the review is written to accommodate those who have not watched the show, and as such, will avoid any discussion of major plot developments.

Netflix has broken out in a big way with its original television programming, thanks to smart, edgy shows that do a wonderful job of providing provocative programs for adult audiences. As much as shows like House of Cards and Orange is the New Black have struck a chord with audiences from that direction however, it does leave an untapped genre of Netflix Original Series offerings that come from more light-hearted, innocent inspiration. Fortunately, Unbreakable Kimmy Schmidt fills that void rather nicely, standing in stark contrast to other Netflix shows, thanks to its chipper tone and upbeat pace.

It’s not difficult to see that the show was originally planned for NBC, being the latest brain child of Tina Fey and Robert Carlock, who previously brought highly acclaimed, but modest-rated comedy champion, 30 Rock to the network. After NBC dropped Unbreakable Kimmy Schmidt from their 2014/2015 season lineup however, Netflix instead scooped it up, and showed a gesture of good faith by giving the show an instant two-season order, with thirteen episodes comprising Season One. 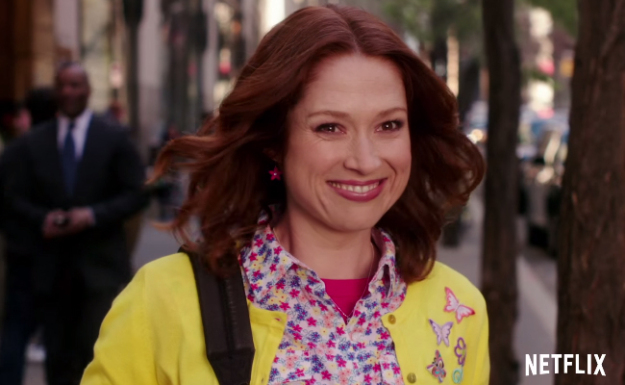 Netflix was right to have faith in Fey and Carlock’s off-the-wall pitch as well. Unbreakable Kimmy Schmidt is not only a welcome breath of fresh air in comparison to Netflix’s abundance of dark, dreary original shows, but it’s also remarkably funny and clever, functioning as a strong spiritual successor to 30 Rock in terms of tone and style. The show primarily markets itself to women and homosexual men, not having a single straight male in the lead cast as of this point, but while its target female and gay markets will get the most out of it, straight male viewers can still enjoy the show quite easily, since it’s very likeable and energetic with its humour.

Unbreakable Kimmy Schmidt’s premise certainly doesn’t sound like it belongs in a comedy, but you’d no doubt be surprised at how upbeat it is when you actually watch it. The show involves the titular character, Kimmy Schmidt being rescued along with three other women from a doomsday cult, where she was kept prisoner in an underground bunker since she was 14, believing the world had ended. Now 29 and discovering that the world has not ended after a SWAT team rescues her and her friends, Kimmy decides to make a new life for herself in New York, despite having a middle school education, and no knowledge of the modern world. 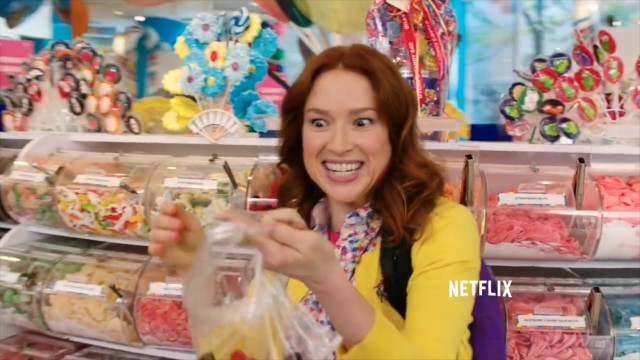 Again, it sounds like it should be very tragic, but that’s sort of why the show works. Unbreakable Kimmy Schmidt could be described as a triumphant girl power anthem in its early episodes especially in Season One, though this would be a bit of an over-simplification. Rather, the show is about making the best of a bad situation, which is why there’s room for even straight men to get behind it, even though the show is not aimed at them. Kimmy’s can-do attitude and aggressive naivete are nothing short of adorable, and the show’s charm quickly becomes infectious because of that.

The Office’s Ellie Kemper is also perfectly cast in the lead role, on that note. Kemper has to be one of the cutest actresses in Hollywood, and her beaming smile and girlish delivery is perfectly suited to a character like this, who is all about being almost child-like in her love of life. Sure, there are some moments where Kimmy gets angry and frustrated, but even these work well, since Kemper plays these darker moments as if she were a little girl in a woman’s body, wisely not handling them in too mature a manner. This is best displayed in Kimmy’s feud with a teenager that she nannies for, Xanthipee (pronounced ‘zan-tha-pey’), which would come off as very immature if it were done with anyone else, but in the case of this character, it creates lots of laughs, since Kimmy is a woman who didn’t really live past 14. Thus, Kimmy stooping to a child’s level to solve a problem makes sense, and works. 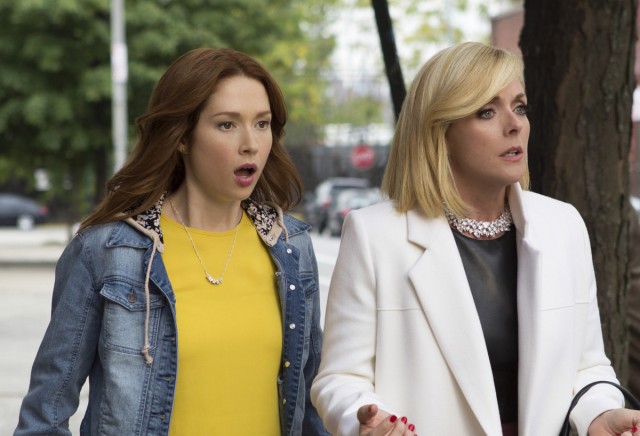 Kimmy having to find a job as a nanny also gives way to introducing another lead character, the vain and spoiled Jacqueline Voorhees, played by none other than 30 Rock’s Jane Krakowski. Krakowski is simply playing a more domesticated version of Jenna Maroney from 30 Rock, but that’s fine, since Jacqueline’s spoiled first-world problems create a hilarious contrast with Kimmy’s very simple world view. Kemper and Krakowski are a consistently amusing double act, as Kimmy reacts wide-eyed and confused to Jacqueline struggling with her marriage, her possessions, and, naturally, some dubious cosmetic treatment.

Of course, since Kimmy is starting at the bottom, she predictably lives in a ratty underground apartment, alongside a difficult, self-absorbed flamboyantly homosexual actor, Titus, played by Titus Burgess. another 30 Rock veteran that played homosexual drama queen, D’Fwan on Fey and Carlock’s former NBC series. It’s another case of vaguely recycling a role, but whatever. Fact remains, Burgess is another funny presence, often being the source of his own misery, but nonetheless motivated by Kimmy to expect better, for better or for worse. Titus is one of the first people to learn of Kimmy’s secret as a ‘mole woman’, and some of the early episodes play with this as well, with Kimmy seeking Titus’ help on how to better blend into society. Titus is probably the worst person to ask, but that’s no doubt the joke. 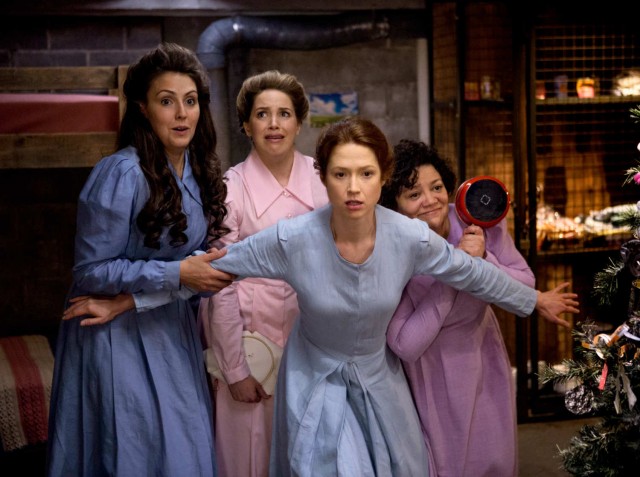 The remaining series lead is Kimmy and Titus’ landlady, Lillian Kaushtupper, played by Gotham’s Carol Kane. Lillian often steals her scenes with her perpetually mysterious past and heavily implied criminal history, and the way that Kane hilariously plays with expectations is constantly a source of comedic gold. You can never quite figure out Lillian, who, alongside Kimmy, is probably the show’s most interesting and fun character. It’s actually a shame that the show waits until the final episode of Season One to pair up Jacqueline and Lillian, since that’s another double act that works incredibly well.

Each of the thirteen episodes in Season One centers on Kimmy discovering a new part of modern life, as reflected in the episode title. The series begins with simple things like, “Kimmy Gets a Job!”, or, “Kimmy Goes On a Date!”, with every episode being called, “Kimmy *does something*”, with an exclamation point. Later on, you get more noteworthy titles like, “Kimmy is Bad at Math!”, or, “Kimmy Makes Waffles!”, with the latter not meaning what you think. Gosh, even the episode names on this show are cute. 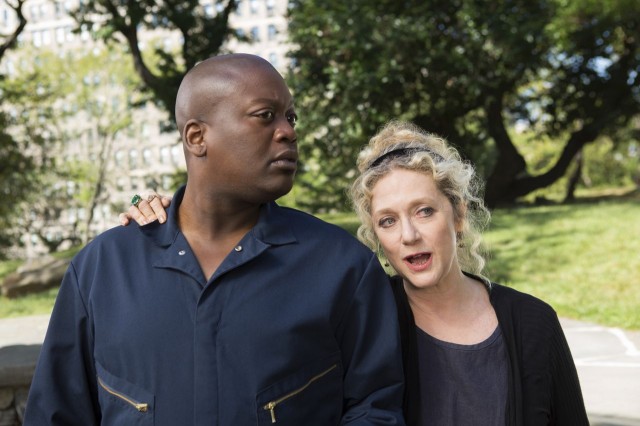 Anyway, most of the stories work really well, with only a couple of duffers. Still, even when an episode has a weak storyline, the high-quality humour still keeps everything well enough afloat. Great guest stars like Tim Blake Nelson, Dean Norris, Martin Short, Nick Kroll, Jon Hamm, and even Tina Fey herself keep things quite interesting throughout Season One, all contributing some standout gags.

Overall though, Unbreakable Kimmy Schmidt is not wanting for standout gags in any fashion. The show is remarkably quotable, and feels like it would have been right at home in the NBC legacy catalogue with other highly quotable and beloved shows like The Office, Parks and Recreation and, naturally, 30 Rock. This feels like the kind of show that could very easily generate memes, which would in turn spawn t-shirts and other such merchandise. Its heavy focus on female viewers might make it just a wee bit less general audience-friendly than NBC’s big recent comedy hits, but like I said, even straight male viewers will find plenty to like about Unbreakable Kimmy Schmidt, if they keep an open mind. 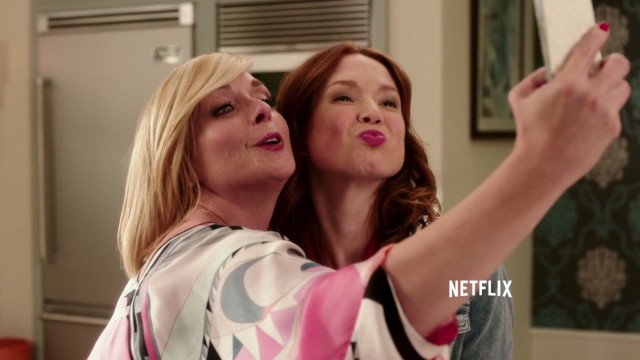 It’s great to see a cheerier Netflix Original Series finally on offer, but even better is a Netflix Original Series that feels so effortlessly funny and memorable in its debut season. Unbreakable Kimmy Schmidt is a real winner, standing tall with its kooky charm and glossy, creative sense of humour in its debut season. It may be an incredibly unlikely pitch for a comedy, but Kimmy’s misadventures are bound to be worth following for years to come!