NOTE: Full spoilers for this episode of ‘The Big Bang Theory’ are present in this review

After its brief reprieve with the couples’ focus last week, The Big Bang Theory returned to its send-off of Mrs. Wolowitz this week. It also kicked the brewing conflict between Leonard and Sheldon into high gear, after an article about Leonard’s theory only mentions Sheldon in the text. It all sounds well and good, but “The Leftover Thermalization” was sadly off of its game.

It would be fitting to a point that this episode would have a more dreary tone than most of the show’s offerings, but when it comes down to it, this week’s episode just wasn’t that funny. It made an effort to be funny, but it just didn’t work this week. It’s difficult to mine good comedy out of the real-life passing of Carol Ann Susi. There was a solid airport bit in “The Intimacy Acceleration”, sure, but that same comedic momentum just didn’t translate into an awkwardly-written farewell dinner. 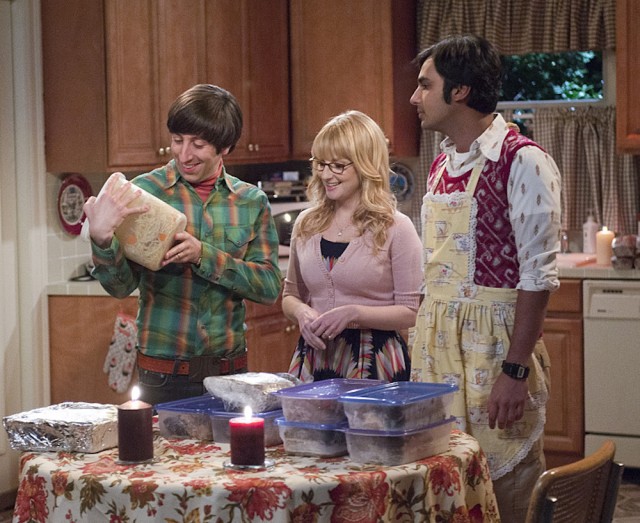 The show has to strain to create its dinner scenario from the start, with a blown-out transformer turning off all of the power to the neighbourhood, and thus defrosting the fridge stuffed full of Mrs. Wolowitz’s final pieces of cooking, which is somehow enough to feed the series’ entire lead cast, plus Stuart (we know Mrs. Wolowitz was a heavy eater, but come on!). Thanks to Raj finding a flimsy way to shoot down simply running the food to Howard and Bernadette’s fridge, the group decides to have everyone together to eat one last meal from Mrs. Wolowitz. Yes, once again, it’s unlikely that Mrs. Wolowitz would cook enough food for that many people, only to take up her entire fridge with it, but whatever, let’s suspend our disbelief.

The real problem wasn’t the dinner though, which continued to provide a fitting tribute to a deceased character that had become quite beloved in her own right throughout the series, even though we never truly saw her, only heard her. The problem was with the subplot involving the Leonard/Sheldon conflict. After Leonard predictably overreacts to not being mentioned, and Sheldon admits that he didn’t correct the reporter when the reporter assumed that Sheldon was the lead scientist, it leads into a big blow-up that permeates a good chunk of the episode.

Leonard and Sheldon are smart people, and while you’d expect Sheldon to be so self-absorbed as to potentially forget Howard’s suffering, Leonard certainly wouldn’t. Not only that, but the conflict escalates to the point of becoming immature, and just making the episode awkward instead of entertaining. Sheldon and Leonard are around their mid-30’s at this point, and that’s a big part of why the jokes don’t work with this conflict; They’re just not believable.

Moreover, if the theory is that well-received, why not just wait for another article to mention Leonard?! Hell, after Bernadette sorts out the two feuding men as they prepare to throw their food at each other (rightfully pointing out that they’re uncharacteristically acting like children), a second article then gets published which mentions Leonard at length, and praises the theory, In that case, WHAT WAS THE POINT OF THIS ENTIRE CONFLICT?!?!

It’s a crying shame, because The Big Bang Theory has been quite good over the past several weeks. It’s really disappointing to see it hit such a sour note this week.

To be fair though, the episode wasn’t completely devoid of humour, even if the gags tended to miss more than they hit. There is one entertaining scene where the gang talks about gender equality as perpetuated by Marvel Comics, and Howard finally pointing out the similarity between Bernadette’s shouting and that of his mother’s was kind of amusing. Even the ending gag, frustrating as it was, had an amusing final line when the group slightly celebrates Leonard being mentioned in a new article, then cheers more enthusiastically when Penny finds more Tums for all of their upset stomachs.

Simon Helberg and Melissa Rauch were also particularly sharp this week. Helberg continues to nicely portray Howard’s vulnerability and anxiety over losing his mother, just as Rauch makes Bernadette charming amidst her rough, aggressive exterior. Even as Johnny Galecki and Jim Parsons were saddled with the difficult task of realizing such a childish conflict (even Parsons had to reach for it this week), Helberg and Rauch made sure that the episode didn’t completely fall on its face.

Still, it’s disappointing that the show hit such a bad speed bump with “The Leftover Thermalization.” The Big Bang Theory was doing so well at re-invigorating itself lately, and not being dragged down by its age the way that last season often was. This week’s episode felt like it just didn’t come together though. It stank a bit of being a rush job that took over for another planned episode, following the tragic passing of Carol Ann Susi, and didn’t flow nearly as well as the subplot from “The Intimacy Acceleration” did.

Since it looks like the series is benched for the next couple of weeks at least, hopefully this means that its return will fare better.