Dammit, Gotham, you were doing so well! “The Anvil or the Hammer” proved to be a frustrating penultimate episode for the show’s first season, since Gotham began to slide back into old habits here.

Just as I feared, the show wimped out of making Barbara a genuinely dark, interesting foil to The Ogre, and just made her a victim again. Oh, come on! The way that the previous episode ended set up all sorts of promise for Barbara to get on board with The Ogre’s twisted tactics. Instead, we yet again have her sitting around and waiting for Gordon. Of course. 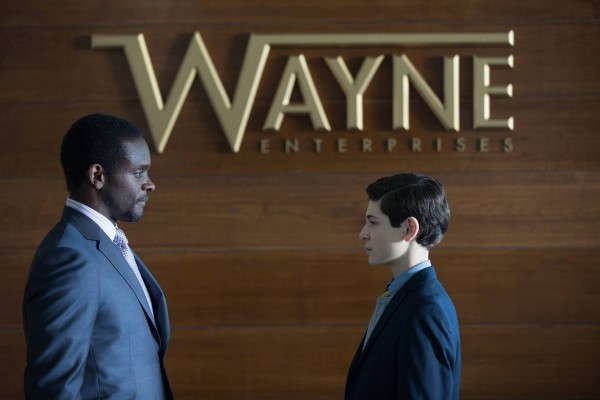 There was at least one good moment to come out of this enormous missed opportunity though. After The Ogre chains up Barbara in his torture chamber, threatening to kill her if she won’t indulge him, Barbara is forced to name a target for the murderer to kill in her name. Who does she name? Her own parents, apparently! Barbara is then subsequently forced to watch as her parents are killed (off-screen, but still), and, yes, Gordon and Bullock do indeed find them dead when they start to close in on The Ogre. That experience is bound to leave a few mental scars on Barbara, and she’s damaged enough as it stands!

Before that however, Gordon and Bullock start going to more extreme measures to close in on their quarry. There’s one surprisingly amusing sequence of Gordon playing the bad cop and getting pointed toward a rather exclusive underground sex club to start, which he must then go to Penguin to, yet again, plead for a favour. Didn’t the show explore this arc for Gordon already? It doesn’t help that the episode repeatedly brings up Gordon already asking Penguin for a favour on a prior occasion either.

Even with Gordon threatening Penguin pretty fiercely, this whole idea of Gordon owing Penguin again just felt tedious and recycled. It did get Bullock his invitation to probe the sex club though, and this did actually lead to one of Gotham’s better moments of dark humour. Bullock initially fits right in to the scene (after confessing to Gordon that the appropriate suits just fell into his locker suddenly from evidence, go figure), but is eventually so disgusted by an off-screen staged sex show that he is forced to declare himself GCPD, and tell everyone not to move. Honestly, it was a pretty funny, well-executed scene, proving again that Gotham doesn’t always botch its attempts at levity. 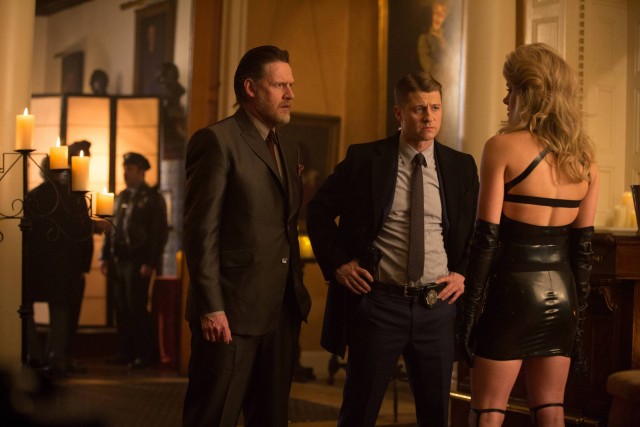 Apparently, one of the hostesses just happened to have been a surviving early victim of The Ogre, and she manages to point the duo to the killer’s apartment. They don’t arrive at the right time to save Barbara, though they do trip a silent alarm that immediately alerts The Ogre that they’re in his place (seriously?), taunting them at their inability to rescue Barbara. Fortunately, Gordon and Bullock make out some sounds on the call, and put together that Barbara has gone to her parents’ mansion.

This leads to a climax with The Ogre having a scrap with Gordon, after initially knocking out Bullock, and then getting Barbara at knifepoint. Well, so much for Barbara being his, “Soulmate.” Bullock ends up distracting The Ogre enough however so that Gordon (yes, Gordon, not Bullock) can put a bullet in his head. That’s the end of The Ogre, one of the better villains that Gotham’s first season has enjoyed.

Gordon makes up with Leslie afterward, but there’s no time to celebrate. We have a season finale to set up for!

Not through with recycled plot arcs yet? Well, Penguin has yet again forced Falcone and Maroni into a mob war, only this time, more successfully. Penguin intentionally set up his hitmen to be killed by Maroni, with Maroni believing that Falcone was behind the hit, and thus having Maroni take first blood in a brutal mob war that is now ready to rush across the streets of Gotham City for the season finale. Yes, Penguin had this plot already. It’s as if The Ogre and some of the Wayne Enterprises material was a byproduct of Gotham getting its first season episode order extended, and the initial season finale plans remaining the same. It just feels awkward, if I’m being honest. 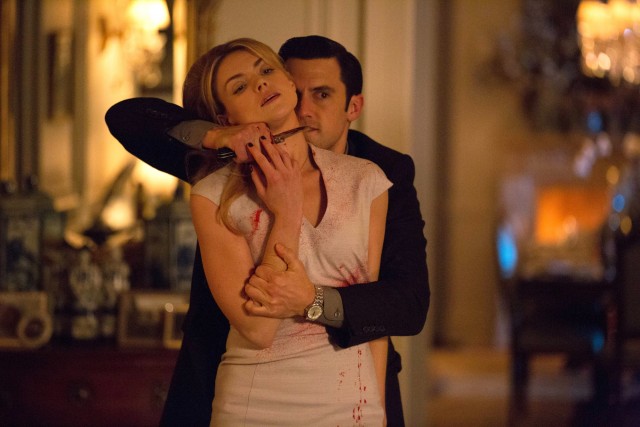 Speaking of Wayne Enterprises, Bruce manages to pull a fire alarm during a tour that evacuates the building, but ends up being cornered in the office of the man who was apparently after Bruce. Bruce learns from here that apparently, his father and grandfather were fully aware of Wayne Enterprises’ crimes, and yet, chose to do nothing about them. Bruce must then be escorted out by none other than Lucius Fox! Hooray for another exciting Batman character appearance! Naturally, Fox covertly tells Bruce to fix the company without arousing suspicion, giving Bruce a much-needed ally in the struggle against the evildoings of his company. It was a brief appearance, but nonetheless a satisfying introduction to a pivotal Wayne Enterprises personality in Batman lore.

Afterward, Bruce ends up tearing up a photo of himself and his father, and putting his father’s picture on the Wayne Enterprises investigation board. Looks like Bruce isn’t giving up, and as he tells Alfred, he doesn’t doubt that his father is a good man, but even good men have secrets. Hint, he’ll be Batman one day, hint. Sadly, it doesn’t look like we’ll be delving into the whole Wayne Enterprises conspiracy in any real detail until Season Two. That’s annoying.

This just leaves Nygma, sloppily tidying up the remains of Ms. Kringle’s murdered cop boyfriend. Nygma manages to keep Ms. Kringle’s suspicion off of him, forging a break-up letter to Ms. Kringle, and telling her that sometimes, one must read between the lines with men. Ms. Kringle excuses herself, with Nygma gleefully chuckling and revealing that the first letter in the five-line message spells out, “NYGMA.” Seems like Nygma’s villainous compulsions as the future Riddler have officially begun. 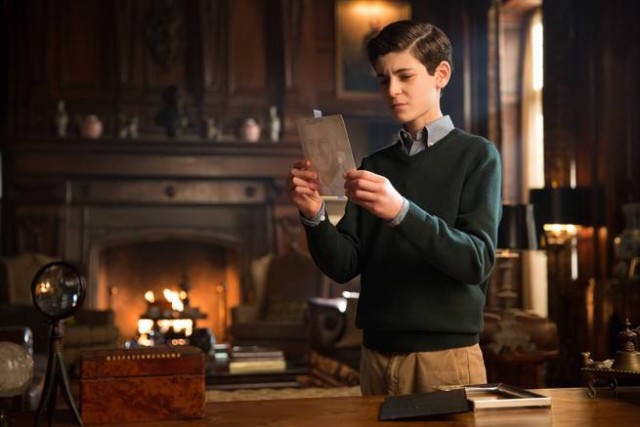 Still, “The Anvil or the Hammer” proved to be something of a disappointment, especially after the great episode we got last week. The material with Nygma and Bruce was solid, and even Gordon and Bullock got some good moments between them, but too many story elements felt recycled, especially with Penguin, while the Ogre resolution was a bit of a dud. It seemed like a lot of moving parts had to be clumsily crowbarred into place for an out-of-nowhere big battle for the season finale next week.

In that case, I guess we’ll have to see if Penguin’s longtime scheming is worth it.

Gotham 1.21: "The Anvil or the Hammer" Review
Gotham disappointed this week, ultimately wimping out of the Barbara material, and leaving Penguin to push the same plot he's pushed more than once already, though at least the Bruce and Nygma arcs turned out alright.
THE GOOD STUFF
THE NOT-SO-GOOD STUFF
2015-04-28
70%Overall Score
Reader Rating: (1 Vote)
71%