NOTE: Full spoilers for this episode of Arrow, including a major character death, are present in this review

After building up some superb dramatic momentum with last week’s episode, “Al Sah-him”, Arrow backpedaled in a bit of a frustrating way with “This is Your Sword”, a nonetheless good episode that firmly put to bed the debate of whether Oliver is truly gone. Apparently, he’s been conspiring with Merlyn to bring the League of Assassins down from the inside the entire time, which required alienating his former friends.

Really? That’s it? There’s no greater need to bring Oliver back from the dark side? This makes last week’s episode all the more impressive for making Oliver seem truly that far gone, but this week, it felt like it swept that struggle completely under the rug. This took away from things like Diggle’s rage and Felicity’s denial, particularly since the characters oddly flipped perspectives this week, with Felicity now claiming that Oliver is gone and can’t be saved, while Diggle and Laurel now believe that Oliver can be recovered. Wait, what?

Well, regardless, Merlyn makes contact with Oliver’s crew, who inevitably don’t trust a word he says when he reveals that he and Oliver have been conspiring to take down the league from within this entire time. Apparently, this grand plot with tons of moving parts was hatched between the two men after Thea was comatose and near-death, following Ra’s’ attack on her in the loft. Man, these two would play a hell of a Chess game together with minds that work that quickly!

Merlyn attempts a gambit by bringing in Tatsu Yamashiro, who identifies herself as Maseo’s wife, to try and corroborate the details. How Merlyn got Tatsu in his corner is a bit of a mystery, but I suppose that Oliver vouced for Merlyn, against his better judgment, and Tatsu was in a good mood that day. In any case, Tatsu and Merlyn are about to head to Nanda Parbat to enact the final phase of the plan, with Diggle, Laurel and Felicity getting the option to come along. Felicity is initially apprehensive, though she finds the resolve to come along when she has a pep talk with Ray, who, unbeknownst to her, is signing away his company. To Felicity?! Wouldn’t that be something if Felicity turned out to own the Queen/Palmer building in Season Four!

Over in Nanda Parbat, Nyssa is naturally not happy about having to marry Oliver, with her father visiting her in her chamber, and presenting her with an heirloom from her mother. Nyssa still refuses to marry Oliver, but Ra’s asserts to her that she has no choice in the matter, rather viciously! It’s one of the better scenes this episode, especially when Ra’s mentions Nyssa’s surname from DC Comics, Raatko for the first time. 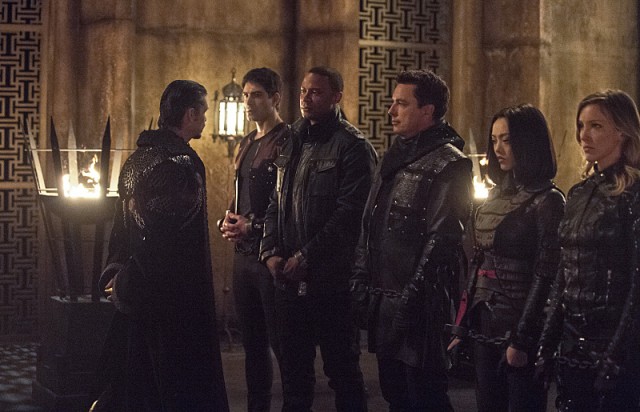 As Oliver’s group lands in Nanda Parbat, Merlyn relays the details of Ra’s’ plan to disperse the Alpha/Omega bioweapon in Starling City, to completely eliminate the last remaining love of Oliver Queen, in a bit of an echo of the Deathstroke motive from Season Two. Is it just me, or was Merlyn’s mention that this plot seems strangely modern for the League of Assassins an important detail? I get the feeling that H.I.V.E., the confirmed villains of Season Four, no doubt have a hand in the Starling City plot. Given that Ra’s spared the life of H.I.V.E.’s leader, Damien Dahrk, it’s entirely possible that Ra’s may be using the League to provide Dahrk with some unseen assistance, perhaps as a means of securing his claim to The Arrow, in exchange for H.I.V.E.’s plans with the virus. That’s wild speculation from me, granted, but it would be a nice way to tie together the conflicts of Season Three and Season Four.

Anyway, after the group is found by the League, an awesome and very lengthy action scene unfolds, complete with Tatsu donning her mask and gear as DC heroine, Katana for the first time! There’s even a hilarious moment where Felicity is trying to dodge the crossfire, then throws her tablet at an assassin’s neck, believing herself to have defeated him, before seeing that Merlyn actually put an arrow in the guy’s back at the same time, and commenting, “Yeah, that makes more sense.” It’s one of the funniest moments of this entire season!

Felicity does save the day however, when she calls in Ray and his A.T.O.M. gear as insurance to stop the plane carrying the bioweapon as it takes off. Unfortunately, the group soon after learns from Ra’s that it’s a decoy plane, and that he still has the virus in his hands.

While this is going on, Tatsu is engaging in a final duel with Maseo, soon appearing to be defeated, before she surprises him with a fatal stab to the chest. Maseo thanks her for releasing him from his prison of grief, before dying in her arms, as Akio did so many years ago. Tatsu sings a lullaby to Maseo’s corpse before screaming in anguish at what she’s been forced to do. Looks like the final piece of her becoming Katana is complete, coming at the same horrible cost that it did in DC lore. 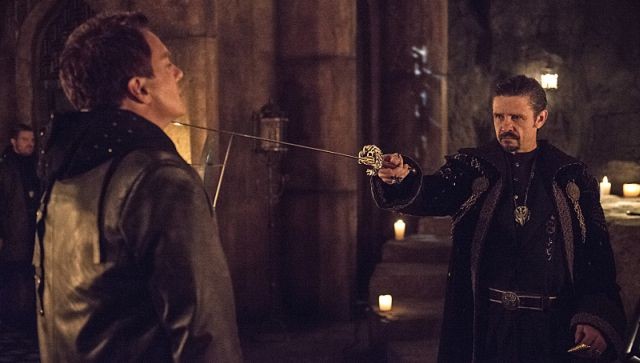 Afterward, everyone is captured, and Oliver confirms the secret conspiracy with Merlyn to Diggle. Diggle refuses to forgive Oliver, but the conversation is cut short when Oliver is led away, and Diggle is returned to a prison cell with the rest of the group. This leads to them missing Oliver’s marriage ceremony to Nyssa, with Nyssa unsuccessfully trying to stab Oliver in the throat as the vows are being read, and the ceremony continuing right after. Wow. Oliver is sure committed to this plan to barely bat an eye at that!

The episode then ends with Oliver having to toss the Alpha/Omega weapon vial in with his friends, after Merlyn tries to rat out Oliver’s plan in exchange for mercy from Ra’s (scumbag!), all of whom appear to slowly die as Oliver’s wedding and successor plans continue. It was a very effective and chilling moment, even if it’s bound to be undone next week by some other contingency plan. Still, concluding the penultimate episode of the season on this scene was very chilling stuff!

There were other subplots beyond what happened in Nanda Parbat, though they felt very awkwardly crowbarred in. Thea goes to visit Roy in his new location, then sleeping with him, before Roy takes off the next morning, leaving her a note that she deserves better than a life on the run with him. It didn’t amount to much, and basically felt like a way to get some formerly denied closure with Thea and Roy’s relationship, which was sweet to a point, but also felt narratively awkward.

Likewise, the obligatory flashback sequences lost a good chunk of appeal this week, since they merely involved Oliver and Maseo capturing Shrieve, then bringing him back to Akio, only to find that Akio has already died in Tatsu’s arms. Shrieve then reveals that there is no cure for the Alpha/Omega virus, right as Oliver, Maseo and Tatsu are captured, with Shrieve planning the kidnapping the whole time. It was an alright set of flashbacks, but definitely below the quality of the past couple of weeks, and more at odds with the storyline progression of the present-day events in this case. 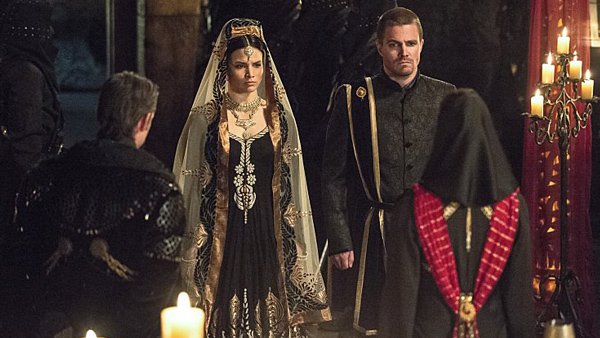 “This is Your Sword” was a solid penultimate episode for the third season of Arrow, but it did have some story frustrations, especially after last week’s promised direction for the season’s climax. The action and drama still had some pretty strong moments, especially with the episode’s impactful ending, though some of the dramatic backpedaling might end up hurting next week’s season finale. Hopefully not, as the mixed bag of the League of Assassins conflict should at least be sent off on a high note at the end of the season.

Arrow 3.22: "This is Your Sword" Review
Arrow annoyingly backpedaled on some of its effective Oliver drama from last week in this week's penultimate season episode, but there was still plenty of strong action and drama to sustain most of the events.
THE GOOD STUFF
THE NOT-SO-GOOD STUFF
2015-05-07
76%Overall Score
Reader Rating: (0 Votes)
0%