Among the many announcements at the Xbox media briefing today, an all-new Xbox One IP was revealed, called ReCore. The game is a joint development effort by Mega Man creator, Keiji Inafune’s studio, Comcept, and former Metroid Prime developer outfit, Armature Games. 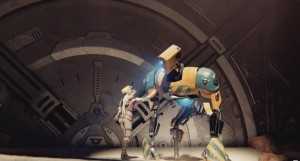 The game was announced with a pre-rendered cinematic trailer, taking place in a bright, cartoon-ish desert wasteland. A woman walks alongside a robotic dog, with evil robots attacking the duo. The dog appears to sacrifice itself in order to save the woman, who then salvages his data core, and places it in a new machine, allowing her to enter some ruins, which gives way to the title.

While no actual gameplay was shown, ReCore appears to be an action-adventure game that relies on this ‘core’ mechanic, if you’ll forgive the pun. Players likely control the unnamed female protagonist, who uses the core of her A.I. friend to explore the game world, making use of a variety of dilapidated machines with any number of functions.

ReCore is scheduled for release in Spring 2016, and will exclusively release for Xbox One. Keep rebooting Eggplante for all news and updates on this promising new Xbox One game.