After teasing a new Star Fox game set to come to Wii U during last year’s E3, Nintendo has now formally announced the new entry in their acclaimed flight-shooter series. The new Star Fox game is officially called ‘Star Fox Zero‘, which is functioning as yet another re-imagining of the original Star Fox plot, which involves maniacal simian scientist, Andross invading the Lylat System, a planet cluster inhabited entirely by anthropomorphic animals.

Star Fox Zero goes back to the classic style of high-flying action, both on-rails and in an open area via All-Range Mode, and will once again feature returning vehicles, the Arwing and the Landmaster. Players will also be able to transform their Arwing and use it as a miniature walking tank of sorts, which was a feature intended for the cancelled Star Fox 2 on Super NES. An all-new gyro vehicle called the Gyrowing is also featured in the game, along with the ability to dispatch a R.O.B.-like robot into the field. Certain stages can also be replayed with alternate vehicles, after initially completing them.

Series creator, Shigeru Miyamoto, also responsible for creating Mario, The Legend of Zelda, Donkey Kong and Pikmin for Nintendo, claimed that Star Fox Zero is not a Part 5 or Part 6 for the Star Fox series, but it’s also not a remake of its clear inspiration, Star Fox 64. The proper term would likely be a reboot, which will hopefully position the Star Fox series as a greater IP for Nintendo in future, assuming Star Fox Zero is successful.

Star Fox Zero is primarily played with the Wii U Gamepad, which combines with the television in a pretty novel way. Players can view a wider, more cinematic shot of the battlefield on the television, though will be able to see out of their cockpit through the Wii U Gamepad Screen, with the Wii U Gamepad also allowing players to aim if they move it around, taking advantage of its gyroscopic controls. The asymmetric presentation allows players to experience key cinematic story moments while still battling through their cockpits, preventing the kind of gameplay interruptions that would occur during cutscenes in other games. 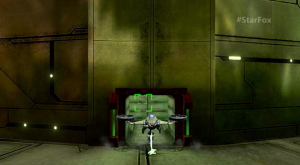 While it wasn’t clarified during the announcement during Nintendo’s Digital Event broadcast, Nintendo later confirmed during a Treehouse Live demonstration of the game that they’re not actually developing Star Fox Zero in-house, and instead outsourcing development duties to PlatinumGames. PlatinumGames has become quite busy as of this E3, with the company also announced to be developing a new Transformers game for Activision, Transformers: Devastation, along with a PlayStation 4-exclusive sequel to cult hit, NieR for Square Enix. This is on top of Scalebound, the Xbox One-exclusive project that PlatinumGames is doing for Microsoft that will be shown at this year’s Gamescom, after initially being announced at Microsoft’s E3 conference last year. This puts PlatinumGames in the unique position of simultaneously working on a Wii U exclusive, a PlayStation 4 exclusive, an Xbox One exclusive, and a multi-platform game. Looks like everyone wants a piece of PlatinumGames!

Star Fox Zero launches for Wii U at the end of this year. Keep flying to Eggplante for all news and updates on Star Fox Zero, and other high-profile Nintendo projects.