If you’re a little confused about the exact timeline of how Mario’s platforming and RPG adventures all play out in the series’ canon, if any, Nintendo appears to have opened that can of worms even more. How? With the revelation that, not only do the RPG subseries offerings, Paper Mario and Mario & Luigi take place in parallel universes, but that they will soon cross over in an all-new combo RPG adventure! 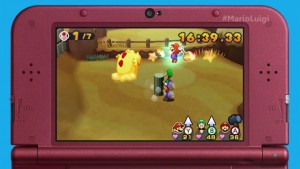 Enter Mario & Luigi: Paper Jam, which was announced to be coming to Nintendo 3DS during E3’s Nintendo Digital Event today. A reveal teaser was shown for the game, which demonstrates the Paper Mario incarnations of the Mario series leads ending up in the Mario & Luigi universe somehow, and meeting their Mario & Luigi counterparts soon afterward. The game appears to boast the same turn-based battle system and timing-based attack inputs as both the Mario & Luigi and Paper Mario games, with Mario and Luigi teaming up with Paper Mario to proceed on a new mission, presumably to get the Paper Mario crew back to their own dimension.

Mario & Luigi: Paper Jam will come to Nintendo 3DS in Spring 2016. Keep folding Eggplante for all news and updates on the Mario series RPG’s.