It hardly feels real, but Sony wasted no time upon the start of their E3 conference, re-announcing along with developers, Team ICO, the revived and improved rendition of their development hell-mired puzzle-adventure game, The Last Guardian. As many suspected, particularly after Sony bullishly refused to cancel the game for years on end, The Last Guardian seems to have abandoned its original PlayStation 3 release plans, and is now releasing for PlayStation 4 instead.

The Last Guardian is the third offering from Fumito Ueda’s PlayStation studio, Team ICO, with Ueda since leaving PlayStation, though assisting in finishing The Last Guardian under contractual obligation. The game was originally unveiled during Sony’s E3 keynote at E3 2009, where it was planned to be a high-profile new PlayStation 3 IP. Since then however, it vanished into the ether, with Sony insisting that it wasn’t cancelled for years, though the PlayStation fanbase was left divided on whether they should keep hoping for it, or give up and move on.

Fortunately, the wait was worth it, as The Last Guardian, still a cerebral adventure about a young boy and his giant bird/dog creature pet… thing, looks gorgeous and smoother than ever in taking advantage of the added power of the PlayStation 4! A new demo showcased how the boy and the beast must work together to navigate the environment, with the boy managing the creature’s emotions, while the creature saves the boy from certain doom with its increased size and reach. 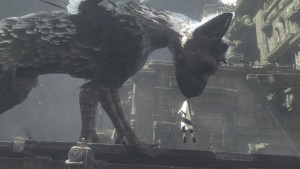 The Last Guardian’s revised PlayStation 4 build now has an updated release plan of 2016, though information beyond that was not specific. Still, who really cares, because The Last Guardian has escaped development hell, and is finally, at long last, on the way!

Keep coaxing Eggplante for all news and updates on The Last Guardian, and other high-profile PlayStation exclusives.