Typoman is probably one of my contenders for Best of Show amongst the indie games on display at E3 this year. In development at the Bonn, Germany-based studio, Brainseed Factory, Typoman follows a pretty recognizable indie game template, being a 2D puzzle-platformer with at least a couple of toes dipped into classic gaming nostalgia, but where Typoman rises far above its competitors is in its unyielding sense of incredible imagination.

It’s been a while since I’ve seen a visual, story and gameplay hook all come together as seamlessly as they do in Typoman. The game puts you in control of the title character, a mysterious 2D stick man-like figure (made from the contorted letters of the word, “HERO”), who is lost in a dreary, dusty world of ash, stone and lots of discarded lettering. It’s very difficult to describe how Typoman looks with mere words, beyond it looking excellent, but I can most closely associate it with the physical manifestation of what kind of world might unfold from the decaying sub-conscious of a failed writer. It’s a nightmare of broken words and suffocating gloom, and it is wonderful!

Typoman seemed to be planned for all manner of platforms when it was first announced, including PC, consoles and mobile, but now, it seems to have ended up being a Wii U exclusive, with Nintendo hand-picking it as a marquee indie game that’s in the works for the Wii U eShop. My hands-on time with it only offered Wii U Gamepad controls, and it didn’t seem to feature any kind of off-TV play at this point, so it’s definitely not the kind of experience that seems to be built from the ground up for Wii U. The 2D movement was even limited to the left control stick, and didn’t offer a control pad option, which seemed a bit odd. That said though, this very promising indie game is still one that avid Wii U gamers can certainly be proud to have to themselves, if this demo is any indication!

As I started to make my way through the decrepit world of Typoman, I immediately took notice of the stellar art design. Typoman is a real thing of beauty, with scattered and re-shaped lettering forming things like barbed wire, fences, and all sorts of other neat background objects. One trap I particularly liked was a word cluster that says, “RUSH”, but if you move close to it, a crusher will thrust down with a C-like shape on the end of it, so that the word now spells, “CRUSH.” It’s incredibly clever visual design! 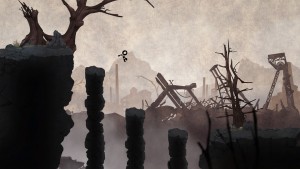 Likewise, letters sometimes pop out of the scenery, spelling words that provide cryptic clues about the path ahead, which can be re-arranged into anagrams that form new means to progress. This is a game that absolutely radiates artistic inspiration, delivering what is easily one of the most striking and instantly memorable worlds that I’ve seen yet in any video game, indie or otherwise! The quiet, haunting soundtrack makes everything come to life all the more as well, and even with no apparent combat capabilities, the frequent threats and dangers of Typoman are great fun to master and outwit!

The key mechanic however, if you haven’t put it together, is the use of words and lettering to literally spell out the solutions to your obstacles. The way that Typoman makes use of this wordplay is superb, and it feels very satisfying and intuitive to open paths ahead by picking up and moving letters around. Again, the demo didn’t give me any weapons to use, but Typoman is capable of picking up and tossing letters with the A Button, also being able to jump when necessary with the B Button. You can also push and pull letters using the ZR Trigger. The controls in Typoman are very, very simple, but this means that just about anyone can pick up the game and immediately start enjoying it.

Even more casual players will also find that Typoman perfectly balances traditional gaming thrills with simple and highly rewarding outside-the-box thinking. For example, one sequence in the demo has you swinging on a trio of vine-like appendages with A, D and D on them, followed by a raincloud that says, “RAIN”, leading into a lake of water that will kill Typoman if he falls in it, as Typoman can’t swim. This setup of letters is a subtle clue that suggests that players add the “D” at the end of “ADD” to the “RAIN” cloud, which spells, “DRAIN.” After that, the water drains temporarily, and gives Typoman a chance to progress. 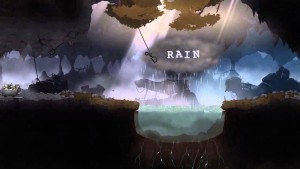 The words can also provide a clue to dangers as well, if you’re paying attention. Another part of the demo had me approaching a seemingly benign word that said “PART.” Seems legit, I thought. Oh, but I wasn’t thinking, as the words immediately sprung forward and crushed poor Typoman, now spelling, “TRAP.” Well played, Brainseed Factory… Fortunately, while trying to trigger the trap in vain to see if I could get around it, it eventually knocked loose the “S” in a sign that said “USE.” This allowed me to move the “S” forward and trigger the trap so that it now spelled, “STRAP.” This opened a strap-like shape that disabled the trap, so I could proceed on. What clever and fun game design!

Sometimes though, Typoman is pretty blatant with its wordplay. One brief cutscene in the demo showed me up against a word cluster that at first said HEAT, before a shadowy figure raised the letters and rearranged them so that they said, “HATE”, which quickly twisted itself into a demon of sorts that instantly kills poor Typoman if it gets its hands on him! Left with no choice but to run away, I got to escape to a new set of puzzles, with just the briefest of hints as to who may be behind Typoman’s, and perhaps this world at large’s, misery.

The short demo ended with Typoman coming into contact with another mysterious figure at a glowing pink tree, which held a tantalizing key in front of Typoman. Right as the key was snatched by a mysterious black hand though, the screen faded out, thanking me for playing, and telling me that the game is coming soon to the Wii U eShop. Crap! This release date, whenever it is, can’t come fast enough! 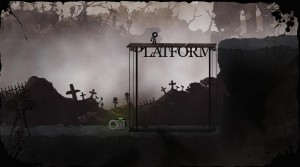 Beyond that, the only notes I took were related to the game’s performance, which is generally good, though the initial boot-up time was pretty long. This is no doubt a side effect of this simply being a demo build, but the final version should probably make an effort to shorten the load times a bit. Still, I’m not surprised that the game’s demo would take a little while to load, since the art design is incredibly detailed and ambitious, especially for the lesser-powered Wii U. The framerate also seemed to stutter a bit in the demo as well, sometimes dipping around 20fps or so in rare instances, but again, I’ll chalk that up to this being a demo build, and not the finished product.

I’m already incredibly intrigued and excited by Typoman. The concept alone is brilliant, but the gameplay and presentation have me hook, line and sinker already! This is an incredible endeavour, and if Typoman lives up to the potential it’s displayed here, it could very well be one of 2015’s best Wii U eShop games!

As it stands, Typoman is getting an A! Can’t wait for the final release!