NOTE: Spoilers from throughout the fifth season of Game of Thrones are present in this review

Game of Thrones generally delivered a strong season in Season Five, despite a handful of annoying mis-steps. The show suffered some growing pains in its latest season, since it now must more actively move away from its source material, with George R.R. Martin’s sixth A Song of Ice and Fire novel, The Winds of Winter still having not hit bookstores. When the show really delivered strong material this season, it delivered some of the best material in the show’s entire history. When it botched an idea though, it was very noticeable in a show that has otherwise had almost universally stellar quality in its five years of running on HBO.

With Season Four ending as Tywin Lannister is killed by Tyrion, and Arya is approaching Braavos (Bran is also beginning his spiritual training, but that doesn’t matter, as Bran was entirely absent this season), along with the ever-present threat of Winter still debated at The Wall, we had plenty of interesting places to take the season. Daenerys’ arc proved especially ambitious, as a rebellion was stirred amongst the citizens of Meereen, one that was largely original to the series, beyond the Sons of the Harpy resistance that also showed up in the source novels. This was a season of unrest, where even established tropes were up-ended in some pretty shocking ways.

For the most part, this worked very well when it came to keeping Game of Thrones fresh. Cersei ended up becoming a victim to her own plot after being arrested by the very religious fanatics that she attempted to exploit, Margaery was arrested by the same fanatics, despite being Queen of King’s Landing, Tommen was left powerless, in stark contrast to the twisted whims of the late, un-great Joffrey, and Arya was finally allowed to seek independence in the House of Black and White. Sansa was even finally given something to do, after Littlefinger coerces her into marrying Ramsay Bolton, in a bid to take back Winterfell. Even then, the largest development came from Jon Snow becoming Lord Commander of the Night’s Watch, and having to convince The Wall to accommodate the Wildlings, whom Jon believes are necessary to fight the coming menace of the White Walkers.

A lot certainly went down in Season Five of Game of Thrones, though not every arc and turnout was a winner. This was particularly evident by the season finale, which left several pressing story arcs hanging and unresolved. The arcs of major characters like Margaery and Littlefinger were simply abandoned halfway through, despite their presence setting up for big things. Likewise, the big development of Jaime and Bronn traveling to Dorne largely felt like a waste, with too little interesting material to work with. It wasn’t until Ellaria effectively declared war on King’s Landing by poisoning Myrcella, something that took her all season to do, that Dorne felt like it went anywhere interesting. Even then, we won’t see any payoff to this Dorne side trip until Season Six, and that’s annoying. 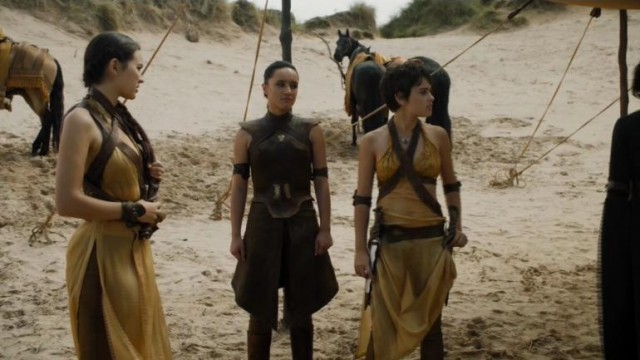 The other big issue with Season Five of Game of Thrones is that it was a little slow, at least in its front half. The back half started to deliver more engaging and shocking episodes, with “Hardhome” being a highlight as one of the series’ best episodes to date overall, and both “The Dance of Dragons” and “Mother’s Mercy” bringing the season to home plate on a strong note. Before that though, the show strangely spun its wheels in too many instances this season. “The Wars to Come” for example was a solid season premiere, but it had very little happening, especially when you consider how Season Four ended. Likewise, the season’s midway point, “Kill the Boy” proved to be the worst offender on this note, being a waste of an episode that didn’t really go anywhere, and just kept rehashing what viewers were already aware of. Game of Thrones seasons only span ten episodes apiece. They really can’t afford to waste time the way that Season Five sometimes did, even with each episode getting an extended, commercial-free HBO runtime.

Fortunately, beyond some of those gripes, the season still largely delivered what the show does best. What action it did have was remarkably well-done, especially in “Hardhome”, and the character drama largely remained sublime, as did some of the twists later in the season. Among the handful of trademark Game of Thrones character deaths, Shireen Baratheon’s was the most impactful and tragic, with Stannis sacrificing her to the Lord of Light by burning at Melisandre’s request, only to still lose against the Boltons, and meet an undignified end at the blade of Brienne. We also lost Aemon at The Wall, who simply died of old age (despite Aemon still being alive at present in the source novels), and Ser Barristan in Meereen, who attempted to fend off an attack by the Sons of the Harpy, one that also left Grey Worm critically injured, but alive in the end.

The season’s end was no doubt a massive shock to those who haven’t read the source novels as well, with the season finale concluding as Jon Snow is ritually stabbed to death by his brothers in the Night’s Watch. This is a huge deal, as Jon is one of the core Stark characters that drive the story of Game of Thrones, especially since this now leaves The Wall wide open to being obliterated by the White Walkers, something that Season Six will no doubt address. There have been plenty of fan theories suggesting that Jon will eventually be resurrected, but for now, we’ve lost him. It was a powerful and potentially frustrating way to end the season, but one that will no doubt have Season Six beginning with plenty of excitement.

In some respects, Game of Thrones’ fifth season felt like it was servicing its next season when it should have been better standing on its own, but the show still stands head-and-shoulders above just about any other television drama at this point. In the grand scheme of things, Season Five’s flaws are still largely outweighed by what this season did right. Even with a slower buildup, the execution still felt satisfying, with many characters like Cersei, Arya and Daenerys ending the season at their most vulnerable, after starting it in a position of power. Ironically, Tyrion, who began Season Five in the reverse position, ended the season on top, with he and Varys effectively having control over Meereen, as the search for the missing Daenerys is mounted by Jorah and Daario. It’s further proof that anything can happen in Game of Thrones, and that both power and suppression are never permanent in the treacherous worlds of Westeros and Essos.

It’s unfortunate that we have to wait until next season to see some of the payoffs that Season Five introduced, particularly for the many arcs of King’s Landing, but with Game of Thrones still fresh and interesting as it ever was this season, I’m sure that the wait will be well worth it!

Game of Thrones: Season Five Review
Game of Thrones suffered from an occasional slow pace, and some over-stuffing of character arcs in Season Five, but the show still delivered some of the best character drama and political intrigue on television in its latest decalogy of episodes!
THE GOOD STUFF
THE NOT-SO-GOOD STUFF
2015-06-24
86%Overall Score
Reader Rating: (0 Votes)
0%