It seems that Sony is giving their slow-selling PlayStation Vita handheld the shaft more than ever lately, particularly after the PlayStation 4 became an enormous success virtually everywhere in the world, save for its native Japan, ironically. Fortunately though, if you’re still interested in Sony’s current gaming handheld, and have yet to take the plunge, you’ll have a brand new variant to look forward to very soon! 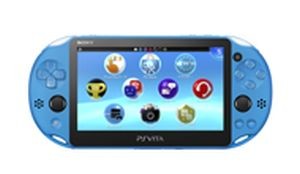 Starting on November 6th, EB Games and Gamestop will be exclusively selling an Aqua Blue-coloured variant of the current PlayStation Vita model, for $199.99 USD. The handheld isn’t bundled with any particular game, though this new rendition may be a way to avoid Sony appearing to sit on their hands as handheld competitor, Nintendo continues to make an absolute killing on the upgraded New 3DS line of handhelds worldwide.

The new Aqua Blue PlayStation Vita unit is currently up for pre-order at American Gamestop stores, and will presumably go up for pre-order at Canadian EB Games outlets any day now. The handheld isn’t being sold at any other store. This also marks the first colour revision of the handheld since the Crystal White PlayStation Vita was offered during the handheld’s North American launch year in 2012, bundled with Assassin’s Creed III: Liberation.

It’s been slim pickings for PlayStation Vita games this year especially in the retail space, though today will see the latest release of the well-received Danganronpa series, Danganronpa: Another Episode – Ultra Despair Girls for the platform in North America. Aside from that, PlayStation Vita continues to be a healthy platform in the realm of indie games and cross-play offerings with PlayStation 4, having new offerings like Xeodrifter and Super TIME Force Ultra hitting the platform today, both of which can be downloaded and played for free by PlayStation Plus members throughout the month. The handheld also remains a strong platform for Japanese games, with highly anticipated niche titles out of Japan like Zero Escape 3 and Odin Sphere: Leifthrasir releasing for it next year, among other offerings.

Keep revisiting Eggplante for all news and updates on the PlayStation Vita hardware and games.