The Danganronpa series is rapidly becoming one of the biggest brands keeping the PlayStation Vita afloat in its native Japan especially. Even in the West however, the series has built a considerable fan following, and one that has been teased by developer, Spike Chunsoft as to the status of Danganronpa 3, first hinted at in the reveal trailer for the recent North American release of spin-off, Danganronpa: Another Episode – Ultra Despair Girls. 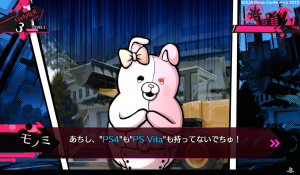 Now, the veil has been drawn back, with Spike Chunsoft officially announcing Danganronpa 3 during Sony’s Tokyo Game Show press briefing, with the game being titled ‘New Danganronpa V3: Minna no Koroshiai Shingakki’ at this point for its native Japan, roughly translating in English to ‘Danganronpa 3: A New Semester of Murder for Everyone. The game has been announced not only for PlayStation Vita, but also for PlayStation 4, marking the first time that the series has expanded beyond Sony’s handheld, even if it’s still sitting firmly in PlayStation territory at this point.

Details are few on Danganronpa 3, including when it’s releasing in any territory, but the game appears to maintain the mainline series’ core gameplay aspect, namely unfolding in a virtual novel-esque game where players must identify a murderer in a twisted classroom-style setting. The Danganronpa games function as something of a hybrid between the deduction-style whodunits of Capcom’s successful Ace Attorney series, and the bleak, disturbing escape-the-room-style gameplay of Spike Chunsoft’s own cult favourite Zero Escape series. Danganronpa 3 however seems to incorporate a whole legion of fellow teddy bear sadists, to stand alongside the series’ mascot and headmaster, Monokuma.

Aside from the official reveal of Danganronpa 3, Spike Chunsoft also showed off a project they’re cooking up for Sony’s PlayStation VR headset, titled ‘Cyber Danganronpa VR: Class Trial‘. The game appears to function as something of a highlight reel of murder cases from the previous mainline titles, Danganronpa: Trigger Happy Havoc and Danganronpa 2: Goodbye Despair, perhaps as sort of a way to remaster the first two games for PlayStation 4, while also making use of PlayStation VR at the same time. Again however, no release information was given, particularly since we don’t even know when exactly PlayStation VR itself is releasing to the public.

Keep investigating Eggplante for all news and updates on Danganronpa.