The English trailer still lists the game as coming to PlayStation 4 only, which seems to be further evidence that the PlayStation 3 version claimed to be in development has likely been cancelled, or never existed anyway. Either way, Square Enix looks to be continuing the trend of not bothering localizing PlayStation 3 ports of their Japanese RPG’s in the West, so you’ll have to have upgraded your console if you want to play this compilation regardless.

It appears that those mysterious leaked listings for a new Kingdom Hearts remaster, the latest offering from the Square Enix/Disney action-RPG mash-up franchise, were indeed accurate. The elusive listing originally showed up amongst the games planned for Square Enix’s E3 press conference and booth this year, before mysteriously vanishing, instead leading to our latest frustratingly tiny peek at the monstrously anticipated Kingdom Hearts III during Square Enix’s E3 keynote. Back then, the game was referred to as Kingdom Hearts 2.9.

Speaking at Sony’s Tokyo Game Show press briefing, Square Enix drew back the veil on the mysterious game, which is actually being titled ‘Kingdom Hearts 2.8: Final Chapter Prologue‘ at this point. The publisher claims that the game’s story will lead directly into Kingdom Hearts III, namely because the bulk of it is an HD remaster of Kingdom Hearts 3D: Dream Drop Distance, which originally launched exclusively for Nintendo 3DS in 2012. 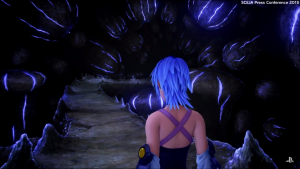 Kingdom Hearts 2.8: Final Chapter Prologue appears to be releasing worldwide in 2016. Square Enix is also teasing a ‘secret’ announcement taking place later during Tokyo Game Show, on the 19th, which may be related to the mysterious Kingdom Hearts 2.9 listing, which may actually be a separate game than this remaster in the end, or the event may be something else entirely. We’ll have to wait and see.

Keep unlocking Eggplante for all news and updates on Kingdom Hearts.