After we got the lowdown on timeslots and pick-ups for this television season, which will add CBS’ Supergirl to the trio of DC Comics-inspired dramas that are already on the airwaves this Monday, two DC Comics-inspired shows were conspicuously MIA. The first was TNT’s Teen Titans-inspired drama, Titans, which TNT later confirmed is still in development, and is simply sitting out this season to work on its ordered pilot more, and the second was Syfy’s DC pitch, Krypton, a Superman prequel series set on the titular alien planet, long before its destruction that sent an infant Clark Kent to Earth.

For a while, it looked like Krypton had been quietly canned internally at Syfy. At long last however, we’ve gotten an update on the project from its showrunner and executive producer, David Goyer, who confirmed that Krypton is still in the works, and is in the early stages of development. Goyer claimed that the network is working with him to develop the history and lore of Krypton, which will take inspiration from ancient cultures on Earth in the series. Goyer also teased some, “Big moments” that will unfold in the series, should it get picked up successfully, though naturally, also stated that it will have more modest production values in contrast to movies like Man of Steel, which Goyer helped write the script for.

Speaking of Man of Steel, Goyer dropped a bit of a bomb about Krypton to that effect, confirming speculation that the series is planned to take place in DC’s movie universe, and will be a prequel to Man of Steel that unfolds two centuries beforehand! Should Krypton go to series, this will make it the first DC Entertainment television series to share a universe with DC’s shared movie universe, which, for now, is completely disconnected to the universes of DC’s television shows, all of which are self-contained, with the exception of Arrow, The Flash and next year’s Legends of Tomorrow on The CW, all of which inhabit a shared ‘DC Television Universe’ on that network. This is in contrast to rival, Marvel, who has all of their in-house movies and TV shows take place in the ultra-successful Marvel Cinematic Universe, without exception.

Krypton taking place in the canon of the DC Movie Universe might also prove to be a useful loophole when it comes to certain Superman-related television rights. It’s probable that the television rights of various elements of Superman lore, with some exceptions, sit at CBS right now, for the soon-debuting Supergirl. Because of CBS’ series, the Zor-El family might still be off-limits for Krypton, though the main House of El that comprises Clark Kent’s immediate alien family is still said to be a part of the Syfy series, and is probably fair game anyway, since Supergirl seems to be unable to make direct references to the name, ‘Superman’, or his own family tree at this point. 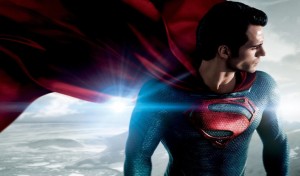 Since NBCUniversal is the owner of Syfy however, that would make them a rival to CBS, so it’s interesting that both shows are able to reference Krypton without stepping on each other’s toes. Perhaps the drastic timeline difference, and the fact that it’s a prequel to a movie, had CBS unbothered by Syfy’s series, especially since Krypton is technically not off the ground yet.

In any case, keeping flying to Eggplante for all news and updates on Krypton, and other DC television projects.