Microsoft and 343 Industries have released a massive onslaught of assets for reviews and previews of Halo 5: Guardians, which is set to drop on Tuesday, October 27th.

The game has been widely previewed already, though the latest asset collection shows a few details about the game we were otherwise unfamiliar with.

Warning: some very mild spoilers follow if you have not paid attention to any preview coverage or mission walkthroughs. 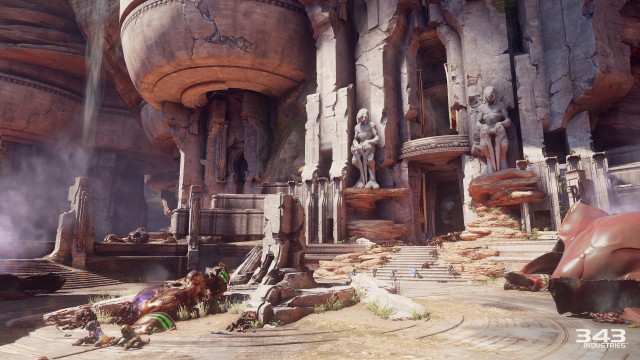 In mission eight, Swords of Sanghelios, Blue Team descends on the Elite (Sangheili) home world in order to reach the Arbiter, though they get to the planet and find an all-out civil war. What is perhaps less-known about the planet is that it is filled with massive, detailed structures of Elite hierarchs, akin to The Lord of the Rings’ Gates of Argonath, though not quite to the same scale. It also offers a look at the care the species takes to create its monuments and temples, despite being known for its violence, even within its own kind. 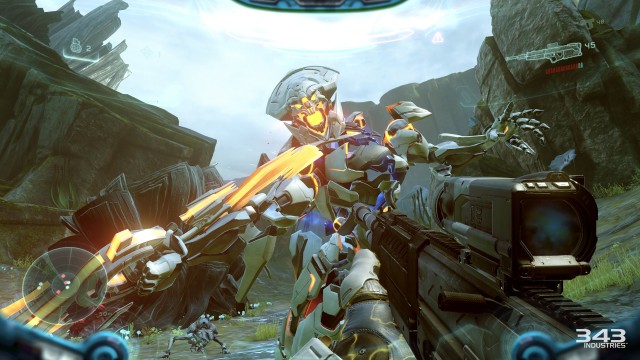 Another little-known piece of the Halo 5: Guardians universe is that of the Warden Eternal. We can’t quite get into what his storyline entails, but you can get peek this giant Promethean creature in the flesh below. Yes, he’s been spotted before, but not in the close quarters we’re seeing here.

As discussed in countless previews before, Halo 5: Guardians utilizes a new mechanic called clambering to evolve the series’ gameplay. Virtually every single-player mission has been designed with a ton of opportunities to use the mechanic, and perhaps no two screenshots show it off better than the following.

Again from Sanghelios, showing off multiple heights and platforms that are best traversed by clambering through the world. 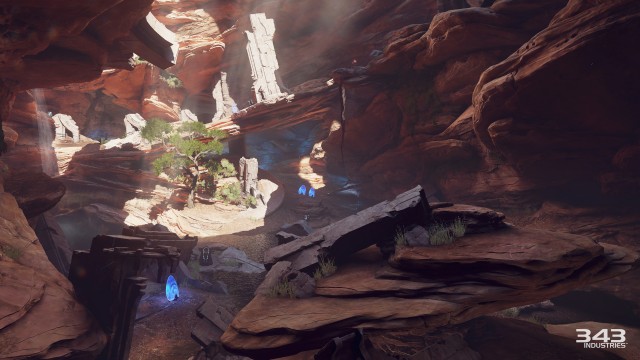 That same multi-height design is implemented in a more natural setting with real stone formations rather than the temples and monuments constructed by the Sangheili.

There are plenty more interesting facets of Halo 5 captured in the screenshots below. We haven’t posted all of them (343 Industries released a total of 147 screenshots), but we’ve selected our favourites for your viewing pleasure, and sorted them accordingly.

Our review of Halo 5: Guardians goes live at midnight Pacific Time the day before the game’s October 27th release.