It’s been a long time coming, but Barbara finally got a truly superb plot on Gotham this week! After Theo Galavan finally authorizes Barbara to kill her former fiance, Jim Gordon, Barbara enacts a convoluted and crazy plan to live the magical wedding day that she never had, and that means taking Gordon along on a ride to crazy town!

Immediately, the mystery starts out strong, with Barbara simply turning herself in to the GCPD, and manipulating Gordon to move along a path of surefire destruction. Despite Barnes, Bullock and Leslie having their separate reservations about Barbara, Gordon goes along with her plans, even attempting to play along, and make Barbara think that he’s still in love with her. Since Gordon knows that Galavan is dirty, and that Barbara is in his employ, Gordon is hoping that Barbara will eventually lead him to the decisive evidence that will allow him to put Galavan away.

Instead though, Gordon drives headlong into an ambush, alongside Bullock, who decides to go along with Gordon over Barnes, when Barnes orders them to come back to the precinct. This allows the show to put a new and expanded strike force into the fray, though honestly, this just led to an excuse to have Galavan’s goons gun down a whole bunch more nameless rookie cops. It sadly seems like the show has completely abandoned the idea of Gordon assuming a leadership role, and that’s disappointing, since it would have been a great way to add another valuable stepping stone to Gordon’s future as GCPD Commissioner.

Nonetheless, Barbara tying up an unconscious Gordon and holding him hostage in the wedding chapel that the two once planned their wedding for, made for a delightfully twisted climax to the episode. Leslie was also pushed in, with Barbara attempting to, “Test” her relationship with Gordon, by attempting to unearth Gordon’s dirty secrets. Surprisingly though, Gordon has been completely honest with Leslie, which sort of deflates this strategy, despite Barbara continuing to assert that Gordon is a closet sadist who is just as deranged as she is. In fact, Barbara is so confident in her plan, which just slightly flirts with the subtext of famed Batman graphic novel, The Killing Joke (further teasing Barbara basically being Gotham’s stand-in for Harley Quinn at this point), that she blurts out to Gordon that Mayor James is alive, and reveals where he’s being stashed.

Luckily, Bullock deduces Gordon’s location, and the GCPD raids the chapel, rescuing Gordon and Leslie, though Barbara gets away in the chaos… For a bit. Gordon ends up cornering her in the attic, and after a brief struggle, Barbara tumbles out the window, with Gordon trying to hold on to her hand. Barbara however willingly drops, though amazingly, doesn’t die. Instead, she breaks several bones, thanks to having her fall broken by bushes (seriously?), and she gets a head injury that will see her hospitalized, and in critical condition.

Personally, I wouldn’t be surprised if this is where the show abandons its idea of trying to turn Barbara into a full-on villain. The big climax of this episode pretty much reached the logical end point of Barbara’s villainous arc, and her head injury will probably end up being a convenient excuse to restore her former personality, hopefully with the spoiled, wishy-washy elements removed. I don’t see this logically destroying the relationship between Jim and Leslie, thankfully, though Leslie does hint to Gordon that she’s not happy with him, after Barbara is apprehended. Well, could be worse I guess.

Despite all that went down with Barbara this week however, the subplots were equally strong, with one involving Bruce, and the other involving Nygma. The Bruce plot had a bit more depth and intrigue between the two though, as Galavan tries to tempt Bruce into selling his portion of Wayne Enterprises for a big payoff, and the identity of his parents’ killer. Understandably, Bruce is tempted by the offer, and even consults Alfred about it. This leads to a very emotional scene of Bruce breaking down, and asking Alfred if he’s a bad person for being tempted, and just wanting the nightmare of his parents’ death to be over. It was a great scene that made Bruce more sympathetic than he’s been in a while, especially given his being under Silver St. Cloud’s thumb in recent episodes. 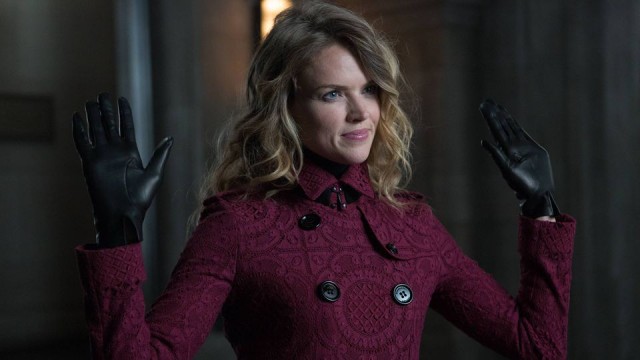 As for the Nygma plot, it was pretty unsettling, in a good way, as Nygma continues his descent into madness. He brings the body of Ms. Kringle to a secluded woodland area outside of the city, and prepares to bury her in a trunk, though not before they share a, “Last meal” together. Unfortunately though, Nygma is happened upon by a hunter, who he hits with a shovel, presumably killing him (honestly, the show is a bit vague about whether the guy is merely unconscious, or dead), and discovers while trying to improvise that someone ate the sandwich that he had been hoping to eat at the, “Picnic” he had prepared. It takes Nygma most of the episode to track the thief back to their crude lodgings in a trailer, but surprisingly, none other than Penguin stumbles out! Penguin pleads with Nygma to help him, and this is where the episode ends. It’s quite a shocking development, and one that finally sees that Penguin/Riddler alliance teased in Season One hopefully coming to fruition, especially when Penguin is still suffering from being shot by Bullock in last week’s episode.

An even bigger shock however came from Gordon rescuing Mayor James, and James’ testimony giving him the proof that he needs to arrest Galavan! Gordon and the GCPD burst in right as Bruce dramatically changes his mind about signing over his company shares at the last second, and Bruce decks Galavan, telling him that he’s under arrest. This probably won’t stick, especially since we know that Galavan has powerful allies, but it will be tough for the new mayor of Gotham City to shake this publicity disaster! Unfortunately though, Bruce doesn’t get to celebrate the victory, as Galavan tosses the file on his parents’ killer into the fireplace during the confusion. Bruce is merely left to scream in anguish as the answers he craves burn before him. It’s another fantastically heartbreaking scene to cap off a pretty awesome Bruce plot this week! 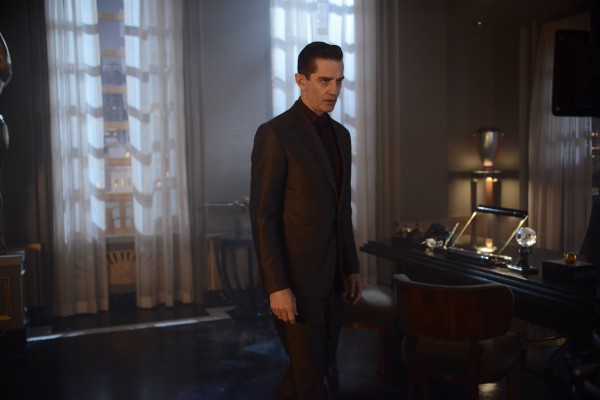 “Tonight’s the Night” was incredibly thrilling and suspenseful, and was another stronger episode for the second season of Gotham. It was great to see Barbara get arguably her best storyline yet, and Bruce had an equally appealing storyline, which was even more emotional and challenging. The show predictably wimped out of killing off Barbara, likely because of her important place in Gordon’s life within DC Comics canon, but even if that head injury provides another soft reset to Barbara’s character, at least her bad girl side went out on a high note!