NOTE: A major spoiler from the current sixth season of The Walking Dead is discussed in this article!

After many rumours and an apparently extensive casting process being held internally at AMC, a highly anticipated villain to come on The Walking Dead has now been cast. Jeffrey Dean Morgan has won the role of Negan, a big villain from the Walking Dead comics, who has been announced to make his first appearance during the Season Six finale next April, with Morgan becoming a series regular in the recently-confirmed Season Seven, which begins airing in October of 2016.

Morgan is of course no stranger at all to comic book adaptations. He portrayed fallen superhero, The Comedian in the supposedly “unfilmable” 2009 movie adaptation of Watchmen, appeared as the leader of the titular anti-heroes in 2010’s movie adaptation of graphic novel, The Losers, portrayed the villain’s son, Jeb Turnbull in 2010’s ill-fated movie adaptation of Jonah Hex, and will soon be seen as Batman’s murdered father, Thomas Wayne in next year’s blockbuster movie, Batman v Superman: Dawn of Justice.

This seems to be our first hint of the potential direction for The Walking Dead’s upcoming seventh season, which will obviously adapt the comic book arc of Negan and his group of brutal survivors, The Saviors. Negan himself is a violent thug that wields a spiked baseball bat, which he refers to as, “Lucille” in the comics, with this trait likely to be maintained for the TV series as well. Negan is also considered to be one of the most beloved and iconic villains in The Walking Dead to date, alongside The Governor, who is now dead in both the comics and TV series.

A big reason for Negan’s infamy amongst fans of the Walking Dead comics is also because he’s responsible for the particularly violent murder of long-running survivor, Glenn in the printed panels, whom he brutally beats to death with his bat. This will likely mark a change for the TV series’ version of Negan however, as Glenn appears to have already been killed, after tumbling into a horde of Walkers, following the suicide of Nicholas, who was hanging on to him at the time. These events occurred during the third episode of the current season, “Thank You”, and Glenn’s actor, Steven Yeun has since had his name removed from the show’s opening credits, seeming to confirm that Glenn is indeed dead already, and perhaps Lucille will have to get some exercise on another of Rick’s survivors. 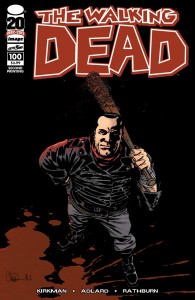 The Walking Dead airs on Sundays at 9:00 PM, on premium network, AMC.

Keep batting Eggplante for all major news and updates on The Walking Dead.