Supergirl continues to do well, though hit a slight bit of turbulence with “Fight or Flight”, an episode that had an interesting idea and a refreshing new villain, though sort of took some steps backwards with certain characters, and introduced another major personality to the show that doesn’t quite fit in as well as he should for now.

This week, we see Cat Grant predictably continue to exploit the Supergirl situation, with the episode picking up immediately where “Stronger Together” left off from last week. After Kara accidentally blurts out that Superman is her cousin during the interview that Cat ordered, she prematurely cuts the interview short, though the damage has been done. CatCo runs the story that Supergirl and Superman are related, which creates a fury of speculation that Supergirl is simply the inferior consolation prize to a far superior hero in the family tree. 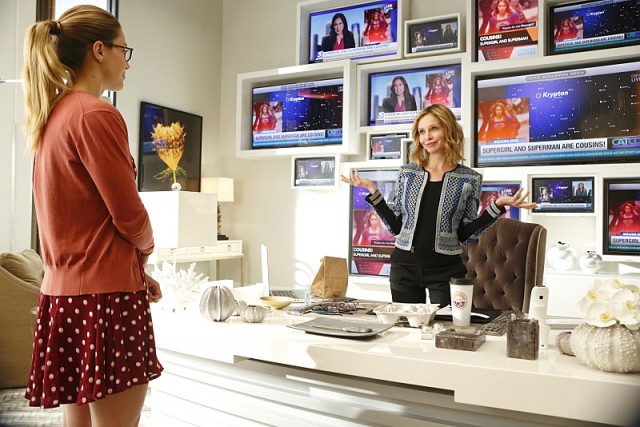 This leads into a very interesting speculation that almost breaks the fourth wall for viewers, as the episode explores how the far larger and more well-known following behind Superman as a hero and a fictional character has led to the overshadowing of Supergirl, even when her intentions are just as good, and she has the same abilities.. Kara’s big challenge is having to prove that she’s not a lesser version of a different hero, which is pretty much the overall challenge of Supergirl as a series in and of itself.

The episode also tries to illustrate this point with our newest villain-of-the-week, Reactron, who is an old foe of Superman in the show’s canon, and one who comes to National City to attack Supergirl in the wake of Cat Grant’s scoop, as a way to hurt Superman in a fit of revenge. Ok, avid DC fans would likely know that Reactron actually has a more storied history with Supergirl than Superman in DC Comics lore, but that’s a minor quibble. Even then, Reactron is probably the most interesting villain that Supergirl has offered so far, being a human villain who can generate lethal radiation beams, and is out for revenge against Superman, since he blames Superman for failing to save himself and his wife from a nuclear power plant’s reactor meltdown five years ago. The fact that Reactron is human even creates an interesting conflict between Alex and Henshaw at the DEO, with Henshaw initially refusing to pursue Reactron, despite how dangerous the guy is, since his department only deals with alien threats. Naturally though, this doesn’t stick for long.

During her first battle with Reactron, Supergirl manages to drive the villain off, though in a subsequent confrontation, she is nearly killed by him, leading to Superman having to bail her out. Apparently, James informed Superman that Reactron was in National City, against Kara’s wishes, and this leads to Kara being angry with James, and questioning whether he should truly be an ally to her, since he clearly doesn’t trust her to fend for herself. James ends up redeeming himself later, though I do have to question why James didn’t just explain to Kara that Superman came of his own will, despite James insisting off-screen that Kara should fight the battle on her own. James withholding this crucial detail for literally no reason led to little more than pointless drama. 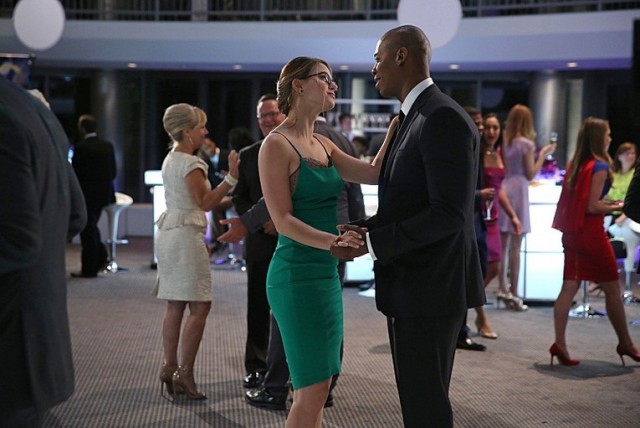 As you can see then, James was a character that suffered a bit this week, and this was made worse by the sudden arrival of his ex-girlfriend, Lucy Lane at the end of the episode, with Lucy being sister to Superman sweetheart, Lois Lane. James simply deciding to go along with Lucy’s dinner demand, even when he knows that Kara can overhear him from outside of the room, just made him come off as a dope. Yes, James is no doubt unaware that Kara is attracted to him, but surely, he wouldn’t blow off Kara in favour of Lucy if he had any sense in him, especially when Lucy just drops in to CatCo unannounced, and James is somehow alright with that. Lucy should not have been able to get very far in the building without James’ go-ahead, so why did he think it was appropriate to engage her in the middle of a work day, within close proximity to Kara? Like I said, it made him come off as a flighty idiot.

On the bright side however, Winn’s character got a lot better this week, to compensate for some of the stumbles with James. Winn is more lovable and endearing now, putting together a crude base for Kara in the CatCo building (do not even janitors go in to that secluded office?), and being the voice of encouragement that James kind of failed to be for the most part this week. Winn is starting to come into his own as the steadfast ally trying to live up to an extraordinary woman that he also happens to be in love with, and believes he has no chance with. Having a far more well-built and attractive cohort in the Supergirl operation can’t help matters. In fact, it’s difficult not to feel bad for the guy when he seems to be more eager to encourage Kara than even Kara is to embrace her identity. He provides a great contrast to the more rational and cautious Alex, and the show finally seems to be finding a good groove with Winn.

A lot of screentime in “Fight or Flight” was given to yet another new DC personality that’s now coming to Supergirl however, and one that was glimpsed very briefly during “Stronger Together” last week. Business magnate, Maxwell Lord made his proper debut on Supergirl this week, as the head of a cutting-edge scientific research firm called Lord Technologies, and an implied object of affection for Cat Grant. This version of Maxwell Lord doesn’t seem to have scads in common with his DC Comics counterpart, and seems to be more closely modeled after the highly successful Robert Downey Jr. portrayal of Marvel hero, Iron Man.

In fact, at this point, he seems to be a poor man’s version of Tony Stark, and this hurts his first impression as a recurring character, since he just comes off as an irritating prick to start. Like the Marvel Cinematic Universe version of Tony Stark in particular, Lord is a very rich playboy and a super-intelligent narcissist that seems to know more about technology than anyone else on the planet. He also seems to be a Supergirl naysayer at this point, refusing to acknowledge Kara saving him when Reactron tries to force him to rebuild his power armour (there’s an irony here, isn’t there?), though it’s also possible that he may just be unwilling to admit that he was bailed out by a woman. In fact, I really wouldn’t be surprised if the show goes this route later, since he seems to be another parody of a bro-douche wunderkind.

In any case, the final struggle with Reactron is pretty decent, as Supergirl melts a lead statue around her hand to rip out Reactron’s Thorium 232 power core, which will otherwise melt down and nuke the city if it’s exposed to open air. The tender instant messaging sequence that followed between Clark and Kara was pretty heartwarming too, as well as a clever way to get around Superman not having a direct speaking presence on the series at this point. The promise of Henshaw to Alex to assist Supergirl with any threats to the planet, not just aliens, should also hold some good promise for future episodes to boot. 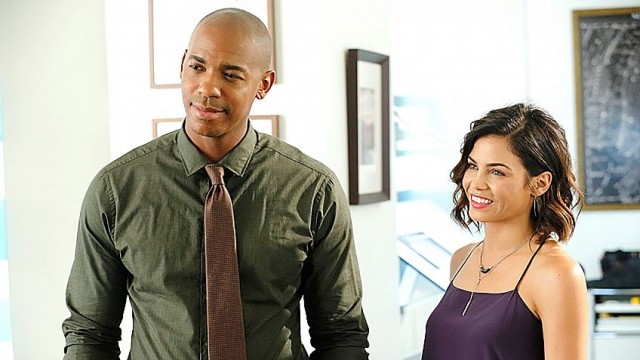 “Fight or Flight” was a solid episode overall, even if it realized some of its many great ideas better than others. Even if James Olsen and Maxwell Lord need a tune-up though, at least the positive development with Winn and Henshaw was a plus, and the show directly addressing the shadow of Superman in a clever way was inspired, especially with a better villain than just another rogue alien this week. I don’t think that Kara has completely abandoned her training wheels yet, as much as she’d like to think otherwise, but at least her optimism and courage still makes her incredibly easy to root for, and that’s what counts.

Supergirl 1.3: "Fight or Flight" Review
Supergirl presented a lot of interesting ideas this week, and a head-on tackling of Kara being in the shadow of her more famous cousin, but some of the personalities ended up suffering, thanks to some uneven writing.
THE GOOD STUFF
THE NOT-SO-GOOD STUFF
2015-11-10
82%Overall Score
Reader Rating: (0 Votes)
0%