After becoming one of television’s most acclaimed shows at present, following nicely in the footsteps of original series, Breaking Bad, prequel/spin-off series, Better Call Saul has now been given a premiere date by AMC. The show will return on Monday, February 15th, 2016. It will remain in its current 10:00 P.M. timeslot as well.

The showrunners of Better Call Saul have been predictably mum about the story for the upcoming new season of the dramedy, though they have teased that Jimmy McGill’s journey into becoming Saul Goodman will continue to take surprising, left-field turns. They also tease that Mike Ehrmantraut will continue to be pulled into a world that he thought he’d escaped forever. Recently, Jimmy/Saul actor, Bob Odenkirk also separately suggested that the show could eventually skip ahead to after the events of Breaking Bad in the future, rather than before them, though there’s no evidence that such a move could happen this season. 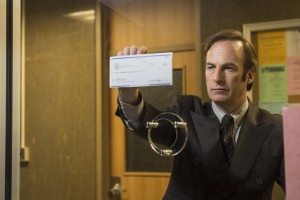 Better Call Saul debuted to high ratings and outstanding acclaim, ultimately becoming the highest-rated new series of last season in the adult 18-49 and adult 25-54 demographic, even if its numbers were eventually surpassed by AMC’s own Fear the Walking Dead last August. It had the third highest-rated first season in cable history as well, following two other AMC shows, Fear the Walking Dead in first, and The Walking Dead in second. Aside from many positive reviews for the first season, including from us, Better Call Saul also won some awards, including two Critics’ Choice TV awards for best lead actor in a drama series (Bob Odenkirk) and best supporting actor in a drama series (Jonathan Banks), plus a Television Critics Association award for Outstanding New Program. While it didn’t win any, the show also got seven separate Emmy nominations.

Keep slipping to Eggplante for all news and updates on Better Call Saul.