Gotham really hit a high point last week in “A Bitter Pill to Swallow”, one that was bound to be a tough act to follow for this week’s episode, “The Son of Gotham.” Still, the show managed to deliver a reasonably good offering in its latest episode, with both Bruce and Gordon getting some standout storylines to enjoy, even if our newest villains haven’t quite come together yet.

The episode begins with Gordon being told to stand down on his investigation of Galavan by Barnes, now that Galavan is in custody, and Mayor James’ testimony is sure to put him in prison for good. Gordon however can’t shake the feeling that something has been overlooked, and, against Barnes’ orders, he decides to follow a lead to a hidden erotic massage parlour, taking Bullock with him. The two get more than they bargained for however, when they run into a sect of monks that apparently originally owned the building where the parlour is now hidden, who brutally stab some of the clients to death. Barnes seems to think it’s merely discontent with their former holy ground being turned into a sleazy rub and tug joint, though once again, Gordon is not convinced that things are that simple. 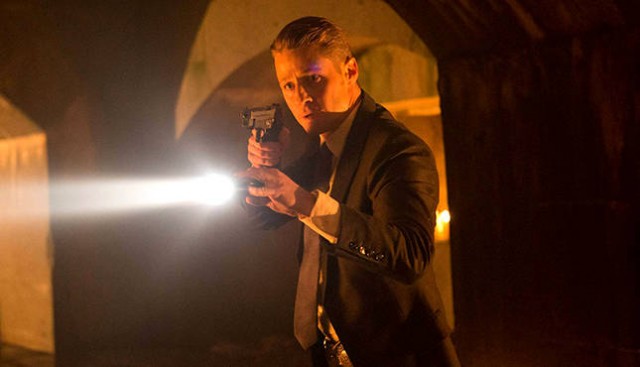 After deducing that the monks operate out of the sewers, Gordon and Bullock manage to discover the place where they’ve been ritualistically killing both lowlifes and rich scumbags, claiming that their blood will cleanse the sin of Gotham. After overpowering one of the monks, and blindfolding him so as to disguise the police having gotten to the man, Gordon tries to pry information out of him, and gets a decisive clue when he hears that the monks are targeting the, “Son of Gotham”, even if we already know that the monks’ leader blatantly spelled out that Bruce Wayne is the target they refer to, during a former episode.

In fact, at this point, the monks don’t feel like exciting villains, since they feel so predictable. The revelation that they’re called, “The Order of Dumas” is nothing special, since they’re obviously fanatics in service to Galavan and his disgraced family tree, with the Galavan family formerly being the Dumas family when Gotham City was first founded. Likewise, despite the monks being pretty vicious killers, Gordon takes one of them out with little effort, and their plans just don’t feel all that exciting yet. Maybe things will change during the Fall finale next week, but for now, The Order of Dumas just feel like more of Galavan’s peons, and have little else to define them.

The real exciting point of Gordon’s plot came when he attended the trial of Galavan, with Harvey Dent even working as the prosecutor. Things seem airtight, though to the shock of everyone at the GCPD, Mayor James lies on the stand, and claims that he was not kidnapped by Galavan, but by Penguin. Since the forged evidence points to Penguin anyway, Galavan is released and cleared of all charges, with Gordon angrily trying to punch him out in the middle of the courtroom! Gordon is soon after dragged off however, where he’s knocked out by dirty cops, and tied up to be humiliated by Galavan. Just as it looks like Gordon is about to be killed however, Penguin shoots the bad cops dead, and demands Galavan’s whereabouts. Looks like Gordon yet again owes Penguin a favour. You can almost make it a drinking game at this point!

Speaking of Penguin, he sat out most of the episode, as did Nygma, though there was an interesting aside where the two have a bit of a roommate squabble, to provide a welcome bit of comic relief to a pretty intense storyline this week. Leslie even believes at first that Nygma is talking to Ms. Kringle when she catches him on a phone, though Nygma lies by claiming that Ms. Kringle left town with Officer Dougherty. This is a pretty convenient tale, though I suspect it might not be long before someone at the precinct sees through it. It might also be intriguing if Leslie is the one to poke a hole in Nygma’s story, which would lead to her being a target of the future Riddler later in the season. If that’s to happen, I think that could make for a very exciting way to give Leslie another big storyline, now that her relationship with Gordon seems mostly stable, and Barbara is currently out of the picture.

As I said though, Bruce Wayne also got a superb plot this week, as he conspires with Selina to try and get the name of his parents’ killer from Silver St. Cloud. Selina tries to warn Bruce not to get in over his head, though Bruce proceeds with the plan, which leads to both him and Silver getting kidnapped by a torture expert and assassin named Tom the Knife. As Tom slaps around Bruce and threatens both him and Silver with mutilation and death, Bruce is taken into a back room, with Tom emerging by wiping a rag covered in Bruce’s blood! Oh no! This is when Silver reveals her true colours however, monstrously threatening and insulting Tom, and provoking him further. When she believes that Tom is about to cut off a finger however, she blurts out that the man who killed Thomas and Martha Wayne was named Malone, and his first name begins with, “M.”

This is the first real clue we’ve gotten as to who may have been behind the Wayne killings, and we’re well into Gotham’s second season now! We knew that Wayne Enterprises had something to do with it, but that’s literally it. For something that served as a backbone of the show’s pilot, it’s amazing that it’s so rarely come up since. Nonetheless, Batman fans and DC fans in general will probably get excited at the uttering of, “M. Malone”, since it seems to be the first mention of Matches Malone in the Gotham universe, a small-time crook that Batman eventually adopts the pseudonym of, whenever he infiltrates underground crime rings. Normally, Joe Chill is the killer of Bruce Wayne’s parents in the majority of Batman media (save for Tim Burton’s 1989 movie, Batman, where they were killed by Jack Napier, the man who eventually becomes The Joker in that story), though that may be too easy for Batman fans to guess in Gotham. If Matches Malone is indeed the Waynes’ killer in this show, rather than Joe Chill, that might explain Bruce’s eventual adopting of his identity as an alias for when he goes undercover to take down slippery criminals during his future tenure as Batman.

In any case, the resolution to this plot was excellent, with Bruce coming out to reveal that the whole thing was staged, with the help of Selina, and Tom, whom Bruce paid handsomely for his services and performance. Bruce proves that he’s starting to master the level of deception he’ll one day need to rely on when he adopts the mantle of Batman, and his telling to Silver that Silver was wrong about who he is, was one of the episode’s best moments overall. The victory is short-lived however, as Bruce is grabbed by Galavan right at the end of the episode, who comes out and admits that he’s out to kill Bruce in the name of his family. Bad news for Bruce!

Where was Alfred, you may ask? Well, he paid another visit to Galavan’s residence, where he runs into Tabitha. The two then end up fighting, in another of the episode’s best sequences, with Alfred even managing to hold his own in the struggle quite adeptly! Alfred gets another knife wound in the process however, and barely stumbles out of the building, managing to climb onto a moving garbage truck to get away. Tabitha manages to nail him in the shoulder with a throwing knife however, and he passes out, still inside the garbage truck’s compactor area. Obviously, Alfred isn’t going to die, as that would irrevocably screw with Batman lore, even for Gotham, though it will certainly be interesting to see how he gets out of that pickle!

“The Son of Gotham” was an all-around good episode that nicely led into next week’s Fall finale, and gave both Bruce and Gordon lots of great material to work with. Even characters like Alfred, Nygma, Leslie and Penguin, who all barely appeared this week, still felt like they had enjoyable scenes whenever they did appear. The Order of St. Dumas really aren’t as impressive as they need to be at this point, but we’ll see if their threat level improves, now that the so-called, “Son of Gotham” is within their clutches.

Gotham 2.10: "The Son of Gotham" Review
Gotham delivered a strong lead-in to next week's Fall finale in "The Son of Gotham", where both Gordon and Bruce revealed new depths of their dark sides, and well-executed scenes from the supporting cast kept everything especially exciting.
THE GOOD STUFF
THE NOT-SO-GOOD STUFF
2015-11-26
85%Overall Score
Reader Rating: (0 Votes)
0%