“How Does She Do It?” was originally supposed to air last week, though due to the fresh tragedy of the Paris attacks, the episode ended up being swapped with “Livewire”, which was originally set to air this week, due to some of this episode’s subject matter, namely involving a throwaway villain that sets bombs around National City. This leads to an awkward revisiting of arcs that were already resolved in “Livewire”, and will probably lead to confusion for average viewers who didn’t know that the episodes were flipped from their intended airing order.

Even with that to consider though, “How Does She Do It?” is the first considerable bit of turbulence that Supergirl hits, making it easily the weakest episode to date in the show’s brief run. It’s not a disaster by any means, still carrying the charm and at least some of the energy that the former episodes displayed, though a largely uninteresting story, a completely wasted villain-of-the-week and a very grating James/Lucy romance sadly kill most of the thrills before they even get off the ground this week.

Things kick off when Kara is asked to babysit Cat Grant’s son, Carter Grant, a shy, but gifted boy that is a particular fan of Supergirl. At the same time however, she has to rush out and deal with the bombings that are ravaging the city, in turn leading to Winn having to watch Carter in her stead while she flies around as Supergirl. Kara naturally has trouble balancing her two identities, and, yeah, you can see where this is going. Among the issues with “How Does She Do It?”, an especially big one is that it feels rather derivative, and it explores an element of superhero media that’s been to death lately. Putting a female-driven spin on it makes no difference. It’s still overdone and tired!

Likewise, the show makes another attempt to bring DC business mastermind, Maxwell Lord into proceedings, but as with “Fight or Flight”, Lord is one of the show’s weakest characters at this point, right alongside James Olsen, and believe me, I’ll get to him. On top of being a poor man’s Tony Stark for the Supergirl universe, Lord is an unlikable douche, and the show seems unable to commit to making him a hero or a villain. Yes, Lord has famously toed the line in DC Comics lore, since he’s been involved in some truly maniacal schemes that threaten the very planet, yet at the same time, is also a key benefactor of the Justice League’s international reach, making his morality a bit ambiguous at times. The difference however is that Maxwell Lord in DC Comics is both an interesting and awesome character. Maxwell Lord on Supergirl however is dull and annoying so far. 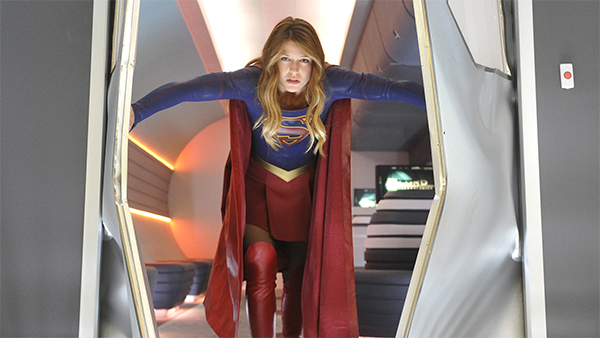 Sadly, Lord also gets his biggest plot yet this week to boot, with Alex having to question him while masquerading as an FBI agent, when it comes out that the bomber’s initial target was one of Lord’s labs, and the bomb happened to be made with Lord’s technology. There’s hints that Alex and Lord will eventually hook up, but their bonding didn’t feel any more interesting than anything else this week. Even when the episode delivers its big twist, where it’s revealed that Lord intentionally staged the bombings to test the capabilities of Supergirl, this just raises a ton of questions, and makes Lord’s subterfuge come off as idiotic, rather than clever. Lord is supposed to be one of the smartest businessmen in the DC Universe, even rivaling corporate titans like Lex Luthor and Bruce Wayne! There’s no way that his comic book counterpart would think that destroying his own facility and sabotaging his own revolutionary futuristic train invention, no doubt plummeting his company’s stock in the process, could possibly be a good idea. Surely, there are better ways to gauge Supergirl’s power, or at least ways that don’t threaten you with bankruptcy!

Oh, and as for the bomber, he’s some nobody that Lord fired, and was roped into doing the bombings by Lord for reasons that I’m sure are not all that smart. He kills himself, and Supergirl is forced to detach a car on Lord’s train to let him blow up. Since the guy is a regular human, and a pawn at that, there isn’t really any kind of showdown. The only result is that Supergirl has to trust the DEO to disarm a separate bomb at the airport, which Hank Henshaw disarms off-screen, using some sort of Cyborg Superman voodoo. Sure, DC Comics fans can probably put together Henshaw disarming the bomb using his superhuman ability to interface with machines, but if you’re unaware of Henshaw being Cyborg Superman in DC lore, then you’re probably just going to be confused about how he stopped the bomb. 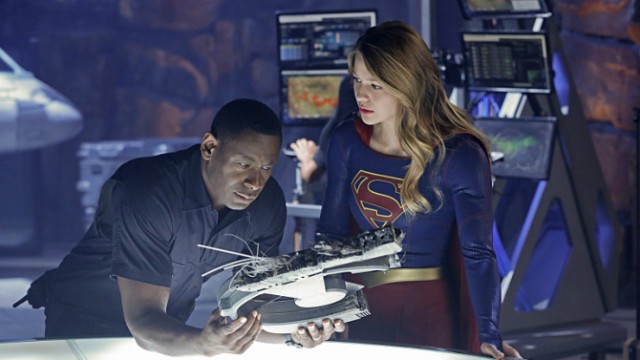 Lastly, I said I’d get to James and Lucy, and I shall now. James and Lucy are an insufferable couple! They have no chemistry, their attraction makes no sense, and their romance is incredibly contrived. James is already one of the show’s shakiest characters, and now that he’s got Lucy chained to him, he’s only gotten worse. The show tries to make things interesting by having Lucy claim that James was too obsessed with following Superman around, rather than building their relationship, but this seems to be quickly abandoned without resolution. Is Lucy just not going to be aware of James’ affiliation with Supergirl?

There’s a lot of flaws in this episode, as I’ve outlined, but like I said, the show’s charm manages to make things watchable, if not particularly exciting this week. At the very least, Carter Grant is a likable character, Winn continues to get some uplifting scenes, and there’s at least an effort made to give Alex more interesting story material, with those hints of a future romance with Maxwell Lord. The action’s pretty toothless this week however, and the especially lame villain-of-the-week is a bigger bummer when we got the chance to enjoy Livewire, Supergirl’s first truly great villain, last week. 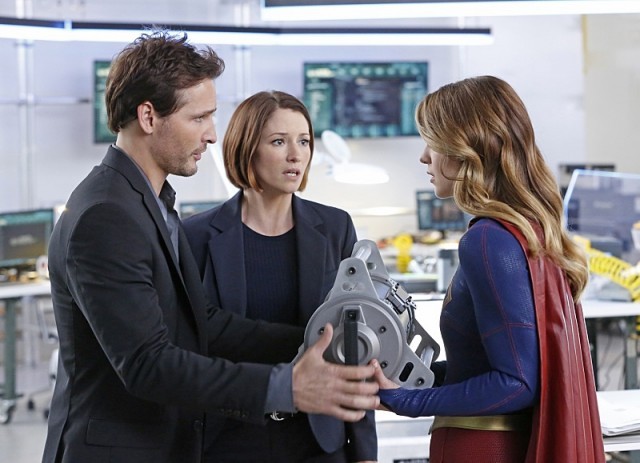 “How Does She Do It?” feels like Supergirl wanted to skew more heavily towards more casual female viewers this week, with its focus on romance and being an independent, yet overworked career woman over action and thrills. In the process however, this episode alienates DC fans who are coming to enjoy a trip to another televised DC Universe, on top of delivering a tired central story idea that has been done to death, and is pretty much interchangeable with almost any other earthbound superhero in existence, which will even annoy more casual viewers. There’s nothing wrong with structuring an episode to cater more to women in general over women (or men) who may or may not be familiar with DC lore already at certain points, but even then, you have to offer material that’s a little more novel and ambitious than the by-the-numbers offering that the show dropped this week.

Supergirl 1.5: "How Does She Do It?" Review
Supergirl hit its first lacklustre episode this week with "How Does She Do It?", sadly, which prioritized the romantic and dramatic struggles of the modern working woman over any real thrills, though forgot to make its altered focus actually interesting or novel for any audience.
THE GOOD STUFF
THE NOT-SO-GOOD STUFF
2015-11-26
62%Overall Score
Reader Rating: (0 Votes)
0%