“Company Woman” seems to officially be the point where Heroes Reborn has given up. It was probably around the production of this episode that the showrunners were told that NBC wasn’t going to green-light any more iterations of Heroes, on account of Heroes Reborn’s lacklustre reception and ratings no doubt, and this leads to a sense that the miniseries is just no longer trying. Even the actors seem very detached now, and rather than at least try to close out the ill-fated miniseries with a bang, everything now just seems to be shuffling through an obligatory finale, with a horrible lack of enthusiasm.

As the title of the episode suggests, Erica Kravid gets a heightened amount of attention this week, with the show finally bothering to explain her motivations with persecuting Evos… Sort of. Instead, the botched writing merely serves to highlight how much Erica is a character that doesn’t truly make any sense, and how pathetically easily most of Heroes Reborn’s conflicts could have been solved, had people just communicated to and listened to each other! So much of this miniseries is now more than ever relying on the characters being stubborn idiots, even when it doesn’t make sense, which just deflates the stakes of the miniseries, and creates the feeling that it’s largely sustained on lazy writing. 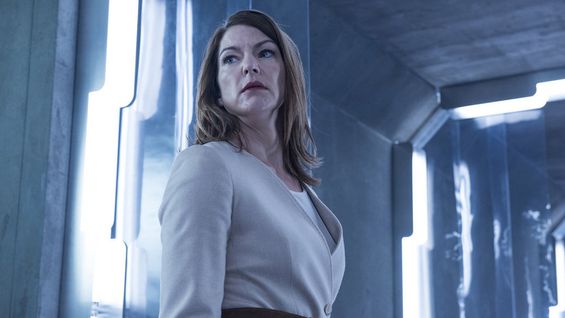 So, what’s the deal with Erica then? Well, apparently she was sexually assaulted by a doctor who was an Evo, and could heal any ailment. Erica had to trade her body for curing her father of a fatal illness, which is how she became pregnant with Taylor. After Taylor is also sick with a fatal illness, and the young Erica is forced to call the doctor again, Taylor is cured, but the doctor announces that he’s taking the baby away, which leads to Erica stabbing the guy in the head with scissors and killing him. Caspar then comes to the door, working for Primatech at the time, with Erica saying that she doesn’t want to forget what happened, and this is presumably how she begins her rise through the Primatech, and then Renautas, ranks.

Yep, Erica’s character took a turn, didn’t she? Rather than be a dramatic twist that made Erica a more sympathetic, harshly relatable villain however, Erica’s backstory, as revealed in this episode, just cemented her character as a mess of faulty ideas that completely contradict each other. Does Erica hate Evos because of what happened to her in the past? Well, clearly not, since her plan relies so much on Evos, and most of her highest-ranked lieutenants at Renautas are Evos. Alright, so, was her plan simply about saving Taylor? If that’s the case, why is she so cruel to Taylor? What does making a, “Perfect world” in the future have to do with Taylor’s well-being? Did her experience with the doctor just flat out turn Erica into a bad person? If that’s the case, why is the show trying to make us feel sorry for her? If we’re meant to condemn Erica, then trying to portray her as a wounded victim of circumstance just makes her a toothless villain.

Clearly, the show’s desperate Hail Mary to try and gain dramatic weight in the eleventh hour failed, pretty spectacularly. There’s even a point where Erica looks like she’s about to kill Taylor, then Taylor looks like she’s about to kill Erica, then nothing happens, and the two just separate. Is anyone else getting the sense that Heroes Reborn is rapidly becoming an even bigger waste of time in its final moments? 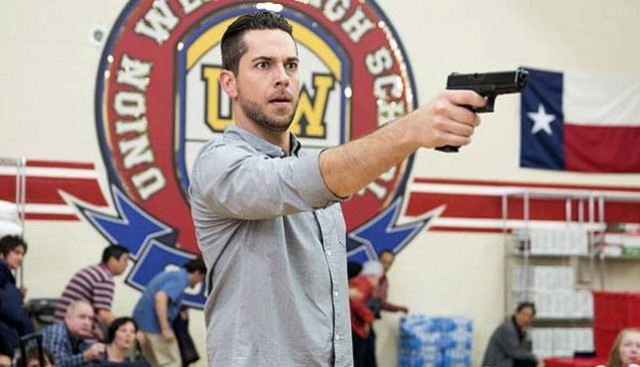 The way that the miniseries is hastily wrapping up character arcs that it can no longer be bothered with is pretty obvious too. Matt Parkman is the one who initially gets to Erica first (somehow sneaking past the scads of security to go right up to her office, because bullshit), gets his family’s tickets to Erica’s future machine, then crashes his car and winds up in a ditch, cackling like a madman. That should be another slap in the face to Heroes fans, but I imagine that they’ve gone fully numb about Parkman’s awful character turn at this point. Anyway, Otomo is also shuffled off, after capturing Tommy and imprisoning him in Evernow for some reason (I guess because we have to suffer through one more episode next week), and Joanne is given her first mission by Erica, and is promptly killed off. Yes, really.

Joanne finally meeting her demise is a great thing, since Joanne is the worst character in a miniseries that is already packed with bad characters, but it felt like the only reason she was hired by Erica was so she could get killed off in a really easy fashion. She’s sent after Malina, who is protected by Luke, and after Joanne tries to shoot Malina within a crowd of people (because Joanne is Joanne, and Joanne is a brain-dead moron), Farah conveniently turns invisible and shields her, after her party is lured by a television broadcast from Malina to try and signal Tommy, and Luke uses the approaching solar energy to roast Joanne into a pile of ash. What’s the fallout from this? Nothing. Luke doesn’t care. Luke doesn’t care about having to murder his wife by literal fire. Seriously. Zachary Levi doesn’t even pretend to care either, as he delivers listless, detached dialogue immediately afterward, since he clearly knows he’s better than this miniseries. 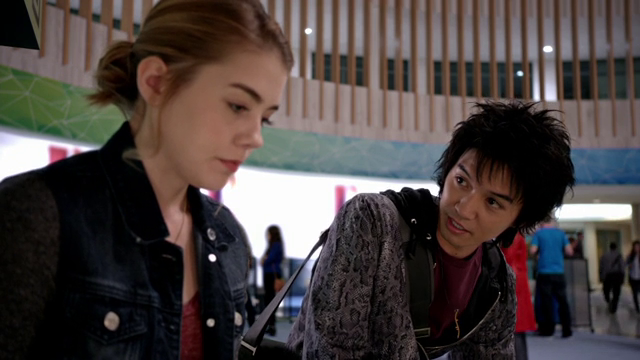 A few other things happen in “Company Woman”, such as Phoebe escaping, Quentin joining Luke and Malina’s party of world-savers, despite almost killing Luke just a minute earlier (like I said, the miniseries has pretty much given up at this point), Emily and Ren teaming up to find Tommy, and to top it off, Noah is still completely absent from the miniseries for some reason. At this point, it’s doubtful that the audience will care about any of it, and those more devout Heroes fans in the audience will probably just shrug as they prepare to see how this debacle concludes itself next week, when it mercifully comes to an end. There really is no more to say. If the miniseries doesn’t care anymore, why should we?