Microsoft has revealed the next batch of free Games with Gold rewards on Xbox One and Xbox 360 for this coming February. 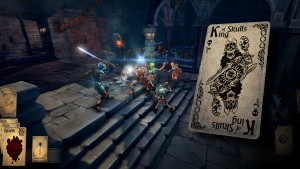 The new Games with Gold rewards will start going live this coming Monday, February 1st, at which point, they’ll start to replace January’s offerings. Thus, if you have yet to redeem Killer Instinct: Season One – Ultra Edition on Xbox One, or Deus Ex: Human Revolution on Xbox 360, you have until then to do so, before they return to their original paid pricing for Xbox Live Gold members. Zheros will remain free on Xbox One until February 15th, at which point, it will be replaced by February’s second free Games with Gold reward for Microsoft’s current console.

Without further ado then, let’s see what Xbox Live Gold members have to look forward to for the month of February:

To start, on Xbox One, Hand of Fate will be offered for free throughout the entire month of February. A fusion between card battling RPG and roguelike adventure, players take control of a nameless adventurer that ends up at the mercy of The Dealer, a mysterious entity who ‘deals’ out their ultimate quest. Hand of Fate has received good reviews since it initially released on Steam Early Access, and also since it fully released last February. Its innovative gameplay and bold fusion of genres was extensively praised, even if its combat was sometimes criticized as being too simplistic. Hand of Fate is also available for PC, Mac, Linux, and PlayStation 4.

The second Xbox One reward for February will be Styx: Master of Shadows, which will replace Zheros on February 16th, and be free until March 15th. A spin-off and prequel to 2012’s Of Orcs and Men, Styx: Master of Shadows is a stealth-action game that places players in control of Styx, the first goblin, who is out to steal the heart of the World Tree. The game received mostly decent to good reviews when it first launched in 2014, with its stealth mechanics getting a lot of praise, even if its frustrating enemy confrontation was criticized. Styx: Master of Shadows is also available for PC and PlayStation 4.

Next, the first free February reward for Xbox 360 will be Sacred Citadel, which will be free between February 1st and February 15th. A beat ’em up-flavoured offshoot of the Sacred series of action-RPG’s, and a prequel to the most recent Sacred 3, Sacred Citadel allows up to three players to team up and battle against the machinations of the Orc Queen. Sacred Citadel received decent to middling reviews when it launched in 2013, with our official review being a bit ambivalent about it. We praised its light-hearted presentation and fun fusion of beat ’em up/RPG elements, though criticized its inexplicable three-player limit, along with its uninteresting story. Sacred Citadel is also available on PC and PlayStation 3.

Finally, the second free Xbox 360 reward for February will be Gears of War 2, which will be free from February 16th to February 29th. An Xbox 360-exclusive follow-up to the original hit 2006 co-op third-person shooter, players once again take control of Marcus Fenix, who returns to command Delta Squad in the war against the Locust Horde. With humanity pushed to its last stronghold, and a disease called Rustlung starting to spread amongst the populace, Delta Squad must put a stop to the Locusts’ newest plan to destroy the last city of humanity. Gears of War 2 received positive reviews when it first launched in 2008, with its shooting mechanics, improved multiplayer and high production values all getting extensive praise, even though its lacklustre story and faulty A.I. were also criticized. 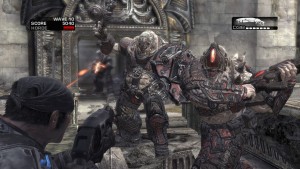 This is a bit of a disappointing month for Games with Gold, which isn’t really taking the world by storm in 2016 so far, especially with the demand for backwards-compatible Xbox 360 rewards appearing to hamstring the incentive somewhat. If you’re an avid Xbox gamer, chances are that you’ve already sampled Gears of War 2 at some point, especially since all four Xbox 360 entries in the series were offered free to early buyers of Gears of War: Ultimate Edition last year, and Sacred Citadel really isn’t good enough to get excited about, especially when Sacred 3, which was also offered as a free Games with Gold reward recently, proved to be such a disappointment itself. The Xbox One rewards are at least marginally better, with the creative and fun Hand of Fate being a clear highlight, even if Styx: Master of Shadows was already offered as a free PlayStation Plus reward on PlayStation 4 several months back.