When Nintendo released Twilight Princess back in 2006, it was a polarizing experience for many gamers. It brought fans together over its return to a more realistic-looking Zelda experience (most notably after the cel-shaded Wind Waker). It made its case for a darker game with more mature themes and deep meaning.  It might have even torn some friends apart over the argument that tacking motion controls onto a game does or doesn’t work.

With Twilight Princess HD, Nintendo seems to have found exactly what this game needed to become the fully-fleshed out Zelda is always wanted to be. 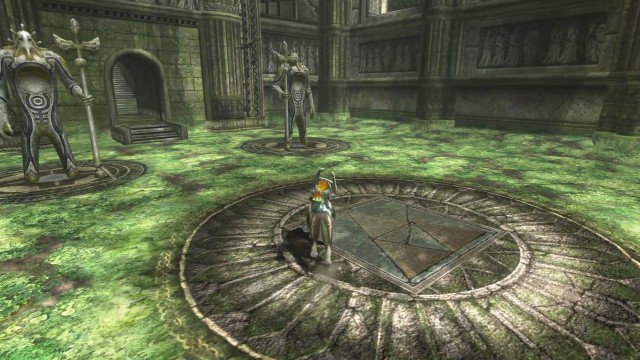 With the Wii U, motion controls are still fully possible, but Nintendo has removed them from this game, opting for both controller-based controls (some motion for targeting is still an option) as well as the GameCube’s layout. The Wii version of the game had a mirrored layout so that Link would appear right-handed as gamers donned the Wii Remote in their right hand alongside him.

Finally, and perhaps the most important piece, is that the game looks and feels better than ever. Nothing about Twilight Princess in its original form would woo a gamer into thinking the Wii was a powerhouse of graphics, and while the Wii U is certainly no Xbox One or PlayStation 4, the game looks like it always should have: textures are beautiful, water effects are misty and effervescent, and animations in characters are fluid and believable.

Perhaps the most unique part of any Zelda game is its puzzle mechanics. Story aside, what makes a truly great Legend of Zelda experience is indeed the way Link traverses the dungeons before him, and Twilight Princess still delivers some of the series best puzzles.

While no dungeons have been changed this time around, there is a new area to master called the Cave of Shadows. As far as dungeons go this isn’t one, despite what seems to be the popular opinion. However, the area is not dissimilar to the Cave of Ordeals, the wave-based challenge Link faces in the main game. In this version, the player taps the Wolf Link amiibo (included with initial physical copies of the game) to the GamePad and plays through waves and hordes of enemies as Wolf Link. Making it to the end might even get you the Bottomless Wallet, assuming you were holding the Giant’s Wallet to begin with.

Other amiibo functionality that bring some new life to Twilight Princess HD include using Link or Toon Link to replenish arrows, Zelda or Sheik to replenish hearts, and Ganon to cause Link to take twice the amount of damage. You know, if you’re crazy.

Of course, this is all additional functionality that is additive to an incredible Zelda experience. Twilight Princess is unique in that it has some of the series most varied gameplay, Link’s unique ability to transform into a Wolf, and what is widely regarded as the best dungeon design in any Zelda before it.

There is a minor issue with the game that is difficult to pardon; being re-released on a console after two generations (the original game was designed for the GameCube) and nearly a full decade, framerate drops are simply unacceptable. Yet, during moments with many enemies on screen or fast-paced animations, the framerate can easily drop to less than half its normal rate for a second or two. It isn’t enough to completely eject the player from the experience, but is a sobering reminder of Nintendo’s lack of processing power in the Wii U. It is perhaps the best reminder of just how hard Nintendo needs to work to make sure its upcoming NX is an incredible system.

All things told, Twilight Princess HD remains a truly epic Zelda title for many reasons. This version of Hyrule is an incredibly open, sprawling area filled with discoveries and dangers and dungeons. It is impeccably detailed, with the HD remake coat of paint adding a seriously beautiful lacquer to a game that really needed it. Gameplay is as sound as always, and made even more so with the removal of the tacked-on Wii Remote waggle.

There is an intangible feeling from Twilight Princess HD that harkens back to a simplicity in gaming rarely seen. That is quite a feat for a game that is, at its core, a complex story involving complex mechanics and a complex timeline. However, something about this specific entry in the Zelda series speaks of something grander, more detailed, and more alive than previous games in the series, even if it is one of its darker entries.

The Legend of Zelda: Twilight Princess HD Review
Twilight Princess HD is a remaster truly worthy of the HD moniker, delivering wonderful visuals atop a Zelda adventure that is easily one of the best in the series.
VISUALS90%
AUDIO70%
GAMEPLAY95%
STORYLINE90%
The Good Stuff
The Not-So-Good Stuff
2016-03-01
88%Overall Score
Reader Rating: (1 Vote)
100%