At long last, after dangling in limbo for two months, The Last Man on Earth is back on the airwaves! Some may feel a little annoyed however, in that this midseason premiere doesn’t check in with the Phil Miller party in Malibu at all. Not even for a second. This leaves part of the midseason cliffhanger resolution still unknown for an extra week, namely the other Phil Miller’s grim fate, as we instead spend an entire episode checking in with Jason Sudeikis’ Mike Miller.

Predictably, Mike survives his fall through Earth’s atmosphere, and his escape pod crashes through an abandoned cruise ship, allowing him to salvage a lifeboat-esque tricycle that lets him paddle through the seemingly endless ocean waters. Still with Phil the hookworm, Mike paddles along until he eventually happens upon a seemingly abandoned boat, helping himself to some food, water and clothes, until he’s discovered by the boat’s inhabitant, Pat, played in a guest role by Sons of Anarchy’s Mark Boone, Jr. 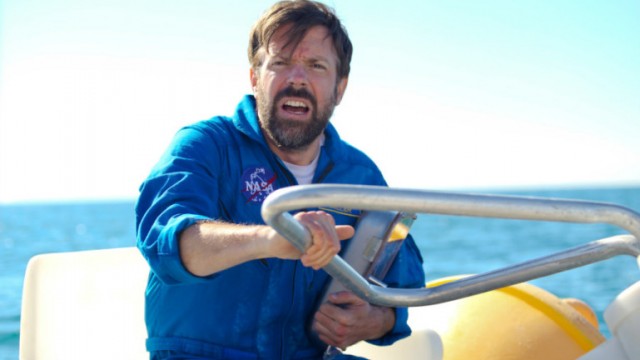 This presented an interesting alternate look at how the world ended, and how an unlikely survivor like Mike would see the fallout. This series may have began with the lone Phil Miller being, “Alive in Tucson”, but Phil was already well aware of how the world’s end went down. Mike had heard about, “The virus”, but that’s all the context he had. Fortunately, getting a tour through the devastation with Pat was both tragic and amusing, especially as Pat repeatedly recounts the rather unfortunate symptoms of the virus, essentially being blood and stool shooting out of every orifice in your body until you were dead. I’m not sure what kind of virus that is, but hey, I suppose that this is supposed to be a comedy series, so whatever.

The main strength of the episode came from how the cynical survivor, Pat initiates Mike, rather harshly, back to the fallen world of Earth. The rapport between these two characters was great, especially since Pat is the first all-new character that The Last Man on Earth has introduced in quite a while. Not only that, but seeing Jason Sudeikis effortlessly move between emotional and witty was very effective, making Mike possibly an even more likable character than his brother, who is supposed to be the main character of this show! 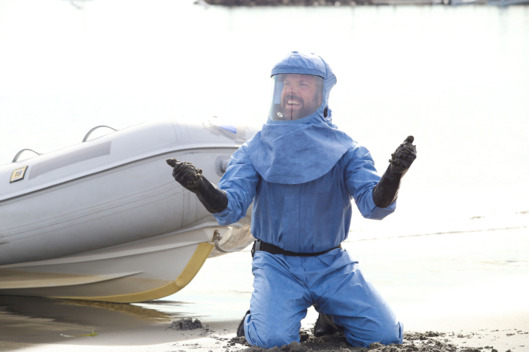 The stakes rose again when Pat actually takes Mike into a city area, where he can see with his own eyes how the world died. Even for a sitcom, there’s an undeniable sense of sadness to the dead Earth, even as Pat forces Mike to go outside in a rather inconvenient hazmat suit, and rather rudely recounts details of how everyone died, including stressing to Mike that whatever family he had is long gone. We know that’s not true, as Phil is still alive and kicking it in Malibu, but it was great to see Mike try and process losing everyone, rather than immediately crash-landing in Phil’s Malibu backyard, as would have been the predictable solution.

Eventually, Mike discovers one of Phil’s, “Alive in Tucson” graffiti notices, and starts insisting that he wants to go. After defying Pat’s orders, Pat knocks him out with a wrench, though after a brief struggle, which results in Mike getting knocked out a second time, Pat sees a hole in Mike’s hazmat suit, and assumes that he’s dead, then leaving him with the other bodies. Of course, Mike is alive, and appears to be immune to the virus, along with the show’s other protagonists, and the episode ends with him driving up to Tucson. Sadly, he loses his hookworm though, who ends up with Pat, to be regaled with stories about tennis. 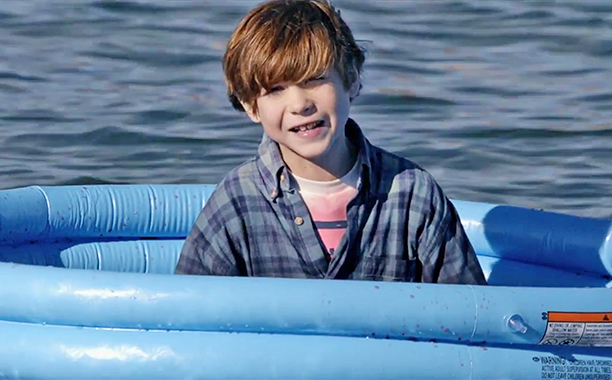 Even if it was unfortunate that we have to wait an extra week to get an update on the show’s lead personalities, the decision to focus an entire episode on Mike and his return to Earth proved to be surprisingly effective in, “Pitch Black.” It gave us another cool way to see the fallout from the end of the world, and pulled off a more emotional and dramatic direction with aplomb, though thankfully, not at the total expense of this show’s pitch-dark humour. Sequences like Pat and Mike playing tennis in hazmat suits, Mike constantly being egged on by a hilarious child rendition of Phil, and Pat and Mike driving around in a run-down ice cream truck, helped inject some levity into a pretty heavy episode. Most importantly though, it brought The Last Man on Earth back on a reasonably strong note, firmly establishing Mike Miller as another worthy piece of the series’ growing ensemble of survivors.

The Last Man on Earth 2.11: "Pitch Black" Review
The Last Man on Earth returned on a strong note in its midseason premiere, with an entire episode focused on Mike, even if it's a bummer that we can't yet check in on Phil's group.
THE GOOD STUFF
THE NOT-SO-GOOD STUFF
2016-03-07
87%Overall Score
Reader Rating: (0 Votes)
0%