NOTE: Spoilers from throughout the second season of “Agent Carter” are present in this review

It’s somewhat of a miracle that Agent Carter ended up scoring itself a second season, largely on account of sheer fan demand. Originally billed as an eight-episode miniseries for ABC in its first season, which aired during the lengthy midseason hiatus for Agents of S.H.I.E.L.D., Agent Carter ended up with middling ratings, though large critical acclaim, as well as lots of fan love. Fortunately, the second season of the series, now upped to ten episodes, continued to justify the adoration of the passionate fanbase, being another high-quality escapade for Peggy Carter and co. that took them to a slick new setting in Los Angeles, now in 1947.

Another big switch for the second season of Agent Carter versus its first was the introduction of a more supernatural element to the show, which proved to be unexpected, given the more grounded direction of the show’s first season, though the supernatural storyline still mostly worked great. The supernatural element, which introduced Marvel Comics’ antimatter-esque extra-dimensional energy, Darkforce (referred to as, “Zero Matter” by the human characters of Agent Carter), was a great way to continue building the scale of the Marvel Cinematic Universe’s early years, long before personalities like the Asgardians, the Kree and the Inhumans show up to further plunge Earth into a new level of super-powered chaos in the present-day MCU. The, “Zero Matter” also served as a neat tease for the potential events of this November’s Marvel Studios movie, Doctor Strange, which may possibly incorporate Darkforce into its own storyline, given Darkforce’s frequent connection to Doctor Strange in Marvel Comics lore. 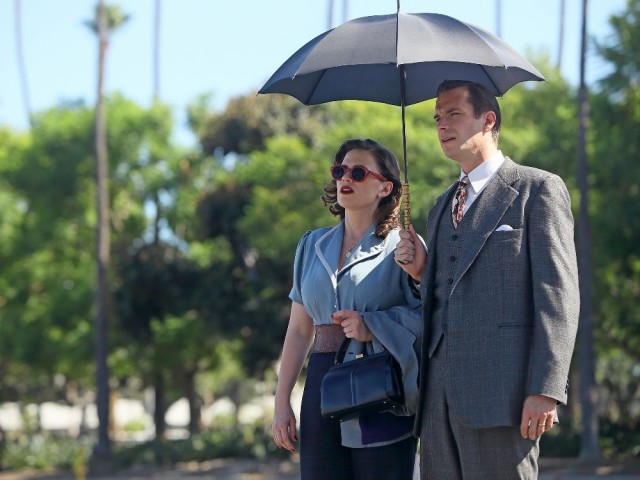 Fortunately, the introduction of Darkforce/Zero Matter also went over very well, thanks to a superb new season villain, who might have even outclassed the appeal of prototype Black Widow, Dottie Underwood in the end! Despite being heavily altered from her Marvel Comics incarnation, Whitney Frost, played in a standout turn by Wynn Everett, was a fantastic antagonist for Peggy to face. Hiding in plain sight as an award-winning Hollywood actress, Whitney is actually a brilliant scientist and inventor, one that ends up exposed to a Zero Matter explosion that grants her Darkforce-manipulating abilities early in the season. Everett stole the show as a progressively more unhinged and dangerous big bad for Season Two of Agent Carter, with abilities that were both unpredictable and terrifying to boot! It’s unfortunate that she’s defeated rather easily in the season finale, though despite her not ultimately becoming Madame Masque like she does in Marvel Comics lore (in the present day, no less, not 1947), she’s a superb addition to the MCU that I really hope makes a comeback somewhere, if not on Agent Carter, then hopefully somewhere else, especially since she’s shown to be alive at the end of the season, even if also insane and committed.

Fortunately, the established ensemble continued to work great as well, with Hayley Atwell still being appealing as ever as Peggy Carter, and James D’Arcy becoming all the better as Edwin Jarvis, particularly with the introduction of his surprisingly cool wife, Ana Jarvis, played by Lotte Verbeek. Ana began the season as a fun new addition, though later on, she presents some surprisingly emotional stakes for both Peggy and Jarvis, particularly when she ends up shot by Whitney, which ruins her ability to have children. This was a heartbreaking consequence for Jarvis’ loyalty to Peggy, though fortunately, one that doesn’t eliminate the potential for Jarvis and his wife returning to Peggy’s side, should Agent Carter successfully get a third season, against the odds. This also forced Peggy and Jarvis to confront their first spat, though ultimately, they were stronger partners for it, and that’s great!

The occasional returns of Howard Stark also continued to be a high point, even if we continued to not see that much of him in Agent Carter’s second season. Similarly appealing was the judicious use of Dottie Underwood, who is even forced to team up with Peggy and Jarvis as the lesser evil in one particular mission against Whitney Frost. Dottie eventually ends up in the wind, presenting more promise for a hopeful Season Three for Agent Carter, though seeing her rapport with the good guys was a real treat, and made this particular episode, “Life of the Party”, one of the most entertaining of the ten. It’s awesome that the show still found a way to incorporate Dottie into the story in Season Two, since she’s such a fan-favourite character, and it would have been a shame to have her disappear from the cast, especially when there’s clearly so much more establishment to be made regarding the Black Widow program and the Red Room.

I can also see new personality, Vernon Masters gaining similar fan-favourite status, played in a debuting part for the MCU by Kurtwood Smith. Originally, much like Dottie in Season One, Vernon was supposed to die at the end of the season, though the showrunners wisely thought better of it, and left his fate ambiguous in the end. That’s fine, since Masters was a delightfully conniving villain, and a great representative for the MCU incarnation of the Secret Empire, which manifests as a secret society of millionaires that influence world history, known on Agent Carter as the Council of Nine. A potential union between the Secret Empire and Leviathan would be an awesome way to tie together the series’ events in a third season, even if it has to be the final season. Even then though, this would be a cool way for Peggy and Howard to start laying the foundation for S.H.I.E.L.D., especially with Season Two dropping hints that the SSR is an outdated outfit, and needs a new face, one that we know Peggy and Howard will eventually provide for it.

Beyond the characters, the storytelling in the second season of Agent Carter was also quite well-done, and continues to exist as its own confident product within the MCU, without excessively falling back on connections to the movies, or other Marvel Television shows. The season took a little longer to find its footing in contrast to Season One, and it suffered a low point from the rather superfluous middle episode, “The Atomic Job”, which forces us to suffer through some of the more annoying characters and story elements of the series, though fortunately, the bulk of the Season Two episodes for Agent Carter remained superb. The series is as lovable and charming as ever, and continues to provide a great balance between high-stakes mystery and adorable humour.

The happy ending for the season, particularly with Peggy and Sousa finally embracing a romance together, is a fair enough way to end things (even if it did make Sousa’s quick and dirty engagement to a nurse named Violet pretty pointless), if we don’t ultimately get a third season for Agent Carter, but the show thankfully still leaves the door open a crack for further adventures with Peggy Carter and co. Whether it’s Jack Thompson being shot and seemingly killed over the contents in a secret WWII file of Peggy’s, Dottie Underwood still being at large, or the Secret Empire and Leviathan certainly still operating in the background, there are still plenty of directions for Agent Carter yet to explore, especially with Peggy continuing to lead an active life in the MCU well into her elderly years during the events of Captain America: The Winter Soldier in the present day.

I, and many others are pulling for this series to go on, even with the struggling ratings. Even if it has to be migrated to Netflix, or some similar alternate option, the stories of Peggy Carter’s post-Captain America life are still riveting and fun, and they still have plenty of possibilities to explore. Despite its unlikely existence, Season Two of Agent Carter continues to impress, with most of its bold experimentation paying off in great ways, particularly as it introduces more golden age-era personalities to the MCU. In some ways, this series is making the earliest years of the MCU just as rich and compelling as the more robust present-day events, and by all means, they deserve to continue being explored, especially when Agent Carter remains as fantastic a show as it ever was by the end of its second season!

Agent Carter: Season Two Review
While it takes a bit longer to find its footing, the second season of Agent Carter is ultimately as superb as the first, especially with an awesome new supernatural hook!
THE GOOD STUFF
THE NOT-SO-GOOD STUFF
2016-03-09
90%Overall Score
Reader Rating: (1 Vote)
90%