The beloved Die Hard franchise hit a pretty hard bottom back in 2013 with the rather dismal A Good Day to Die Hard. Fortunately, the spirit of Bruce Willis’ famous franchise managed to live on in another form just a few weeks later, with Olympus Has Fallen, a movie that is blatantly inspired by Die Hard, but somehow managed to outclass the actual Die Hard sequel of that year by a sizable margin, essentially becoming the fifth Die Hard movie that audiences actually deserve. As with Die Hard, the movie was about one lone man taking on a squad of terrorists in a claustrophobic space that he couldn’t easily escape, with the main hook of Olympus Has Fallen being that said space was the White House!

Even as 2013 also provided a second and entirely separate movie about terrorists taking over the White House, in Channing Tatum/Jamie Foxx vehicle, White House Down, Olympus Has Fallen was one of 2013’s biggest surprise hits, grossing over $160 million on a $70 million budget, and defying negative critical reception to strike a big chord with action movie fans. That led to production on a sequel that nobody expected to exist, including the studio, and that sequel has now graced the big screen!

London Has Fallen exercises the typical action movie sequel trope of making everything bigger, in this case, reviving a similar formula as Olympus Has Fallen, only now on a city-wide scale. Unfortunately, it also exercises the frequent action sequel shortcoming of bigger not necessarily meaning better. While it still manages to capture the cheesy spirit of the 90’s-era action flicks that this accidental franchise draws so much inspiration from, London Has Fallen is also less clever and less memorable than the first movie. Fundamentally, the action is good, and the returning leads are great as ever, though by the time you exit the theatre, it’s likely that most of London Has Fallen will have already escaped your memory, even if it’s still pretty fun while it lasts.

London Has Fallen marks the return of Gerard Butler’s Secret Service super-agent, Mike Banning, still in service to Aaron Eckhart’s U.S. president, Ben Asher. The two end up in another sticky situation when they go to London, England to attend the funeral of a beloved prime minister, alongside a slew of other world leaders, just in time for a hilariously improbable terrorist attack from Yemeni extremists that not even Doctor Doom himself could possibly bankroll and manage, let alone some random assholes from a small country like Yemen! Regardless, Banning and Asher are now forced to survive after London has seemingly ‘fallen’ to the bad guys.

Much like with Bruce Willis’ John McClane in the Die Hard franchise, Banning and Asher have some spectacularly rotten luck to end up right in the middle of yet another impossible terrorist operation. Fortunately, as with the first movie, Butler and Eckhart are wisely in on the joke, and their on-screen chemistry continues to be a big highlight in London Has Fallen. The two crack wise like real, longtime buddies, and Butler himself continues to be a hugely fun lead and a very appealing badass, even as he’s violently executing terrorists seemingly every other minute, and outright admits to Asher that he’s not even going to stop and check whether the people he’s knifing en masse are actually bad guys, especially when they’re all disguised as police officers. I guess the AK-47’s are probably a giveaway though, since U.K. police don’t even generally carry guns, let alone the most recognizable generic terrorist guns of any action movie worth its salt.

London Has Fallen still portrays its personalities as proud, dumb action movie stereotypes, and that’s pretty apparent with how little sense the characters and their motivations often make. Much like Olympus Has Fallen, it checks off almost every imaginable action movie cliche, and it does so with a goofy smile on its face. The bad guys are just bad guys, stirring up trouble because they’re bad guys, and that’s about as deep as the movie gets. It’s all surface spectacle, but given the continued sad drought of cheesy action movies in modern cinema, London Has Fallen does manage to get away with its own self-aware stupidity, if only by virtue of the fact that we now have too few movies that are not afraid to just be an explosive good time for action movie buffs, and London Has Fallen still scratches that itch.

This sequel does come off as a bit blatantly focus-tested though, since its runtime is more lean, and focused mostly on Gerard Butler this time, plus it seems to push a lot of the other personalities from Olympus Has Fallen into the background. Morgan Freeman’s Vice President. Allan Trumbull does show up again, though he largely just serves as a talking head to keep pushing the story forward, while Banning continues to actually do almost all of the legwork. Similarly, Radha Mitchell also shows up again, as Banning’s wife, Leah, though she only appears in a couple of scenes, and largely to serve as motivation for Banning to think about resigning from the Secret Service because he now needs to raise a child. Because it’s definitely good to abandon a well-paying and steady job when you’re having a baby in this economy, clearly. 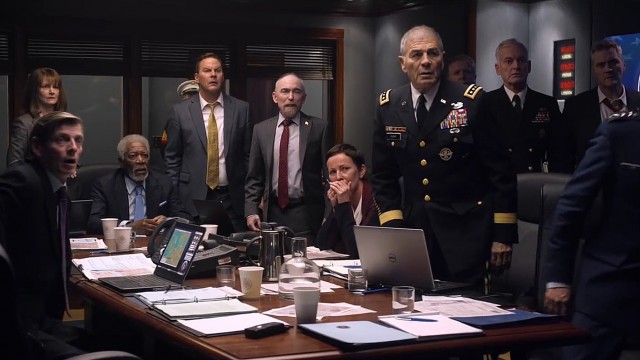 London Has Fallen does try to build some small measure of continuity with Olympus Has Fallen by bringing back many of the actors that played White House employees in the first movie, but this time, they’re really not given anything to do, and they all pretty much just sit on the sidelines now. Even the world-changing events of the first movie are barely mentioned, which is a bit shocking. Most of the movie entirely feels like Gerard Butler’s show, with an occasional dosage of Aaron Eckhart for good measure, and I suppose that’s fine, since Butler is an appealing and fun lead to watch. At worst, this sequel can come off as workmanlike, though at the very least, the cheesy charm of Olympus Has Fallen does manage to return in enough potency to make the personalities of London Has Fallen continue to be appealing, even if the first movie did a better job of balancing the ensemble.

London Has Fallen has the kind of storyline that feels like it could be scribbled out on a cocktail napkin. It’s a movie that throws all pretense to the wind, and just completely goes for broke as a dopey action movie sequel, pandering exactly to what fans of the genre would expect and hope for.

Unfortunately, this could be why the movie feels so disposable and forgettable. Adding to this issue is the fact that, even compared to the first movie, London Has Fallen is pretty damn illogical. There’s a charm to the stupidity, but it’s still stupidity, and the stupidity is definitely heavier than it was in the already dopey first movie. The attack on London is so impossibly precise and destructive, and the bad guys are so inexplicably resourceful and well-armed, that they basically might as well be working for a comic book super-villain. This sequel pretty much says it all in the title, and simply exists to find a major city, destroy it, and then have Gerard Butler kill a bunch of bad guys in it. That’s all.

With the increased scale comes the further diminished cleverness that ultimately dooms London Has Fallen to being a lesser movie than its predecessor. With the confined space of the White House, Banning had to be a lot more sly and aware in Olympus Has Fallen. Now, he pretty much just moves from one key location to the next, shooting and knifing whoever is in his way, Call of Duty-style. That still gives people interested in this movie what they want, but unlike Olympus Has Fallen, this sequel doesn’t end up really providing more than the bare minimum.

Another big strength behind Olympus Has Fallen and it being far better than many viewers expected it to be, was the direction of Antoine Fuqua, who helmed it as a tightly-constructed and intense throwback action movie. Unfortunately, Fuqua didn’t return to helm London Has Fallen, after reportedly disliking the movie’s script, so directing duties have now been taken up by Babak Najafi, an Iranian director with no Hollywood credits to his name.

That would normally be a pretty huge red flag, though fortunately, Najafi still manages to make an entertaining action movie, even if one that’s not quite as well-directed or tightly realized as its predecessor. Najafi seems to wisely let Butler and Eckhart do their thing in the lead parts, and does throw a lot of ambition behind the action scenes, even attempting the increasingly popular one-long-take-style sequence at one point towards the climax. It doesn’t feel like most of the other actors beyond Butler and Eckhart were given a lot of direction, at least not in terms of their performances, but I suppose that Najavi had a clear-cut set of priorities, and seems to be well-aware of what people are coming to see this sequel for.

The worst shortcoming of Najavi’s direction seems to be the desire to increase the scale of London Has Fallen, but try and do so with a smaller budget. Yes, this sequel had even less of a budget than its predecessor, which was mostly confined to one building. As a result, the movie is full of weird effects goofs and just plain awful CGI for some of the initial destruction and conquering of London. This includes things like mismatched stock footage, and smoke and flame effects that obviously aren’t real, and have clearly been placed there in post-production. It gives London Has Fallen a slapdash feel that it really shouldn’t have, especially with several sequences of pretty questionable editing in the movie’s final cut. Najavi at least manages to capture the expected spirit of action-packed fun in London Has Fallen, but he didn’t manage to achieve the same sense of worthy production values that the original managed to pull off.

London Has Fallen isn’t as good as its predecessor, and that might be expected by discerning action movie enthusiasts who were already surprised at how well Olympus Has Fallen turned out back in 2013. The sequel does its job, providing some fun, goofy action for your cinematic dollars, though it’s disappointingly disposable, and feels strangely sloppy in some places, even considering the aggressive lack of logic behind the movie’s story and personalities.

If you liked Olympus Has Fallen, then you’ll still enjoy London Has Fallen, even if this sequel merely makes par, and doesn’t manage to exceed it like the first movie did. Action movie fans have no doubt seen better than London Has Fallen, but the movie does alright when it comes to sating your desire for a good old classic-style action movie, without needless depth or over-thinking involved. The city-wide scale action movie has definitely been done better, namely between Die Hard: With a Vengeance and Live Free or Die Hard, but London Has Fallen still could have turned out a lot worse too.

This isn’t really a movie that you need to rush out and see in the theatre, since it’s entertaining, but very forgettable, though if you’re in the mood for a silly action flick, it’s worth a rental on home video, especially if you already enjoyed Olympus Has Fallen. It’s probably unlikely that Banning and Asher will return for a third Fallen movie from here, but then again, I suppose it’s true that Banning has proven pretty hard to put down. Since that alone still provides plenty of goofy grins for action movie buffs, I suppose that’s fair enough.

London Has Fallen Review
London Has Fallen isn't as good as its predecessor, though it still manages to scratch that old action movie itch, even at the cost of even less brains this time.
CHARACTERS65%
PLOT50%
DIRECTION60%
THE GOOD STUFF
THE NOT-SO-GOOD STUFF
2016-03-12
60%Overall Score
Reader Rating: (1 Vote)
59%