Better Call Saul has generally remained consistently excellent in its current second season, though, “Bali Ha’i” is probably the closest that the show has come to a filler episode at this point, unfortunately. Despite some decent story turns for both Mike and Kim, Jimmy was largely left to bumble around and not really accomplish anything of note. Even the final result of Mike’s plot felt like it didn’t necessarily need an entire episode to realize, though Kim’s plot at least justifies taking up most of this week’s offering.

Since Hamlin, Hamlin & McGill has still banished Kim to the document room, she becomes even more restless about going to waste at her job. Right as she’s seriously questioning her future at the firm, a competing firm in the Sandpiper case then starts courting her, promising her a similar opportunity as Jimmy had with Davis & Main at the end of Season One and the start of Season Two. 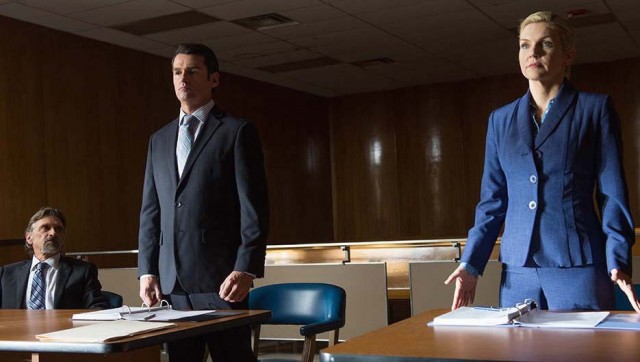 This ironic role reversal is the main reason why Kim’s plot was easily the best in this episode. Kim was suddenly put in Jimmy’s shoes with the job offer from the other firm, and that was very interesting, since it forced Kim to put her money where her mouth is when it comes to her preaching about Jimmy in the world of professionalism and honesty. The timing is quite fortuitous, though the moral crisis of Kim is definitely valid, since she owes a lot to Hamlin, Hamlin & McGill, even with their poor treatment of her lately.

What was most interesting about Kim’s storyline is that she actually ended up taking a similar path as Jimmy when she was presented with the supposed golden opportunity, complete with wanting to run a con with Jimmy when a guy buys her a drink at a bar. Surprisingly, it’s Jimmy that ends up being the one that feels guilty in the end, even though Kim and Jimmy nonetheless end up sleeping together again afterward, though it would have been better if Jimmy wasn’t just taking up space this week.

Considering that this show is primarily supposed to revolve around Jimmy and his eventual evolution into Breaking Bad’s Saul Goodman, it’s weird that the show has started to move so far away from Jimmy’s central arc over the past couple of weeks. Jimmy literally spent almost this entire episode twiddling his thumbs, with entire scenes dedicated to him simply playing around with his room furnishings, sleeping in his former office at the nail salon (which he’s still a legal tenant of, further foreshadowing that he’s not going to stay at his firm forever), and finally ripping out that damn cup holder that’s giving him so much trouble in his company car. The scene of Jimmy finally losing patience with the cup holder was kind of amusing, but frankly, this episode might as well have not included Jimmy at all, given how little it made use of him.

As for Mike’s storyline, it was pretty strong, even if not quite as strong as Kim’s arc. Surprisingly, Mike took the less predictable option of initially turning down Hector Salamanca after his big offer last week, and this led to some quick intimidation from Hector, as his goons begin to harass Mike to take the money and help bail out Tuco. Initially, it’s cool to see Mike implement tricky measures to get the upper hand on Hector’s thugs and scare them off, continuing to prove why this character is so infinitely resourceful and appealing, though when they start threatening Mike’s daughter-in-law and granddaughter, Mike finally relents and decides to take the deal. I suppose that even guys like Mike Ehrmantraut have their weaknesses, after all.

Fortunately, this moment didn’t feel like a defeat, since Mike nonetheless stared Hector down after meeting with him, even with Nacho and the twin assassins, Leonel and Marco at his side (remember them from Breaking Bad? Awesome to see them again!), and said that the price is up to $50,000. Hector initially tries to take the payout completely off the table and simply award Mike his life, but after Mike demonstrates a lack of fear of dying, Hector is impressed, and agrees to the increased $50,000 price. Despite that however, Mike still gives Nacho half of the money, conceding that he didn’t totally hold up his end of the deal with Nacho to get Tuco pinched in the first place. Even with Mike agreeing to the deal however, Nacho still brings up that the two opposed the interests of Tuco and Hector alike, and neither are truly safe if word gets back to them. Obviously, Mike survives to appear throughout the events of Breaking Bad later, but perhaps Nacho is not so lucky…

Ultimately, there isn’t too much to say about, “Bali Ha’i”, which is one of the more straightforward episodes of Better Call Saul. This show’s usual strengths are still on offer, though much of the storytelling beyond Kim’s big job offer and Mike’s badass moments didn’t hit with quite the same incredible punch as most other episodes on this series. Even this lesser filler episode stands as a superior offering to the vast majority of television, but it would be nice if Jimmy started returning to the spotlight a little more soon, even with the good developments going on with Mike and Kim.