After a bit of a stumble with the disappointing, “Et Tu, Doctor?” last week, Lucifer regained its footing in spectacular fashion with the standout, “A Priest Walks into a Bar”, which may actually dethrone, “Wingman” as the season’s new best episode to date! The angle of the episode is simple; Lucifer meets a priest, who is forced to ask for his help. From there, the story really does write itself.

In fact, this latest episode of Lucifer packs in such clever storytelling that even the show’s normally weak procedural side was pretty appealing this week! The idea of a priest being forced to turn to Lucifer was great enough, but the story got all the better after hinting that the priest may have a dark and violent past, especially when he becomes the prime suspect in the murder of an instructor that he routinely disagreed with at the local youth center. 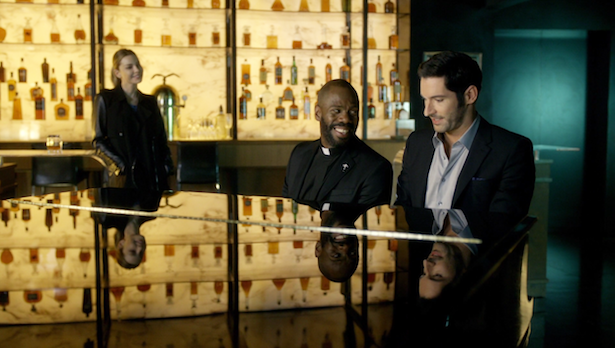 Predictably, Lucifer makes it his personal mission to expose and discredit the priest for the first half of the episode, mainly wanting to take the case on that basis. He even initially refuses the man’s help, before the murder angle and suspecting by the LAPD gets Lucifer interested in the priest’s plight. As usual, the childish mischief of Lucifer is immensely appealing, and this latest obstacle of his character worked excellently from both a comedic and dramatic standpoint.

Even more effective is how Lucifer and the priest develop a friendship as the episode goes on. Lucifer doesn’t admit this of course, adamantly standing against priests on principle (obviously), though the charming scenes between Lucifer and the priest really speak for themselves. Things like the two musing over God and sin, playing the piano together, and enjoying the ambiance of Lucifer’s nightclub, ironically give Lucifer the fastest friend that he’s possibly ever made in the human world. This also came at an ideal time in the seasonal arc as well, since Lucifer has started to shun Maze after her scheming with Amenadiel, and there’s the slight implication that the loss of his demon companion has left Lucifer wanting for that similar sort of divine connection.

That in turn led to a standout climax, after the red herring of the troubled youth that the priest watches over is proven not to be the murderer, but instead, another youth instructor is behind the killing. It’s unfortunate that the actual culprit is barely given any development, since he shows up at the murder scene just one time, introduces himself, and then pretty much leaves, which is the one area of the show’s procedural element that continued to falter this week. Beyond that though, the resolution of the case played out brilliantly, especially when the priest throws himself in front of the boy to save him from a gunshot, leaving him dying. 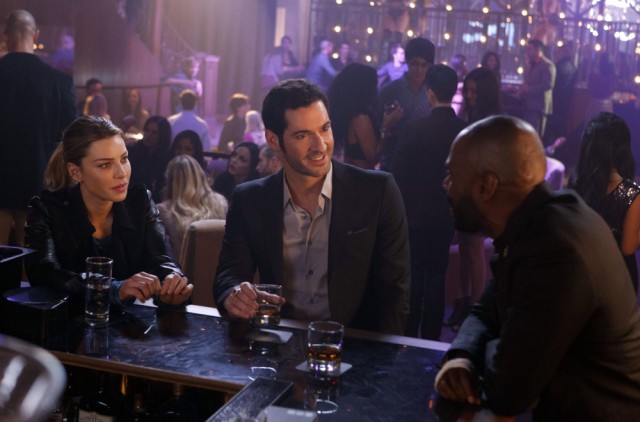 Everything that followed from here was really satisfying in terms of drama, as Lucifer finally comes out with admitting that he’s attached to the priest, and frantically tries to keep him alive. The reveal that the priest was actually aware that Lucifer is The Devil the entire time was especially heart-wrenching, especially when he leaves Lucifer with the suggestion that God’s plan for him, while seemingly bleak at this point, may not be finished yet, and that even The Devil himself may have greater things ahead. The priest even manages to inspire Lucifer from beyond the grave, as Lucifer ultimately decides not to punish this week’s murderer, with some encouragement from Chloe, and instead goes to the balcony of his nightclub to reflect.

This was actually one of Tom Ellis’ best scenes all season so far, and that’s saying quite a lot, as Lucifer angrily curses out God after wind keeps blowing out his cigarette lighter, lamenting that he doesn’t understand what it takes to please his father. It seems to be irrelevant as to whether you’re a sinner or a saint, when no one wins in God’s eyes, or so Lucifer believes. Witnessing that even The Devil himself doesn’t have all the answers to good and evil in the universe gave Lucifer a powerful moment of vulnerability, and this is a big part of the reason why Tom Ellis’ portrayal of this lead is so fantastic every week.

The episode’s subplot was also quite strong, especially as it continued to develop the danger facing Dan, and soon Chloe, as Malcolm makes himself Dan’s new partner, as a way of keeping his enemies close. The twist reveal that Malcolm is willfully and knowingly in Amenadiel’s pocket was great, and seeing Amenadiel consistently threaten to send Malcolm back to Hell if he steps out of line was surprisingly sinister, and continues to make Amenadiel an effectively ambiguous character. Even being an angel, Amenadiel is willing to do whatever it takes to restore the perceived order in the worlds of Heaven and Hell, and ironically seems to have even less regard for human life than Lucifer does, whenever it gets in the way of that agenda. 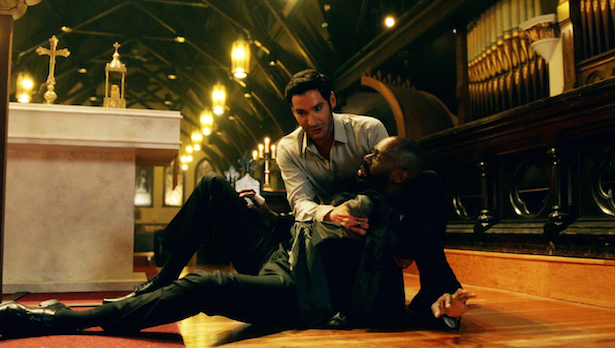 Every so often, Lucifer manages to wrestle free of the creative shackles that are holding it back, and, “A Priest Walks into a Bar” is the most inspired and awesome that this show has yet been! Said creative shackles seem to wrap themselves around the series again in the following week’s episode, but I really hope that’s not the case next Monday, as even the procedural element of the show was realized exceptionally in this latest episode. This is a great example of an episode where Lucifer is living up to its proper potential, and I hope it serves as the example to follow when FOX is putting together a potential second season!

Lucifer 1.9: "A Priest Walks into a Bar" Review
Lucifer delivered a great episode that even made effective use of the show's procedural side this week, as Lucifer befriends a most unlikely client!
THE GOOD STUFF
THE NOT-SO-GOOD STUFF
2016-03-23
88%Overall Score
Reader Rating: (2 Votes)
97%