Gotham’s had several big shake-ups recently, between Gordon being put behind bars (and escaping), Penguin being rendered kind and docile, and Bruce taking to the streets with Selina for, “Research”, but a lot of these story arcs came to their conclusion this week, in, “Into the Woods.” Biggest among these was the full-blown transformation of Nygma into his future villain identity of The Riddler, and Gordon’s confrontation with his former ally.

The final stages of the Riddler transformation arc took center stage this week, as Bullock secretly works with Gordon to track down the person who framed him and had him sent to Blackgate Penitentiary. After Bullock does all he can do, Gordon decides to turn to the only other steadfast ally he’s had in the GCPD; Nygma. Since Nygma knows how to work with audio, and is able to identify the tipper’s voice on a recording recovered from Internal Affairs, the newborn Riddler is Gordon’s next stop. 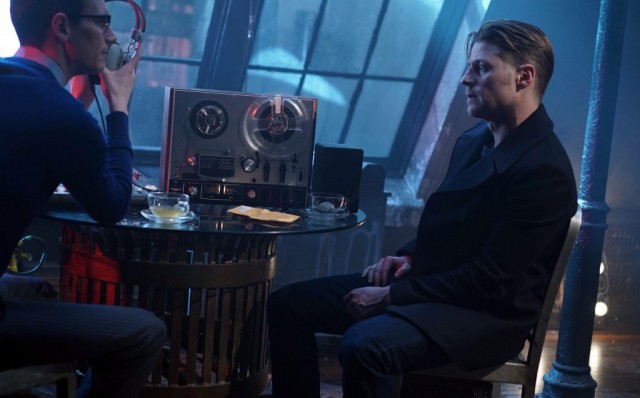 Given how much buildup we’ve had with Nygma’s transformation over the course of two seasons, it was immensely cool to see the truth gradually come to light for Gordon, as he trusts Nygma to point Gordon to his target, only to then discover the horrible truth. The dialogue between Gordon and Nygma was particularly outstanding here, as Nygma confesses that it was pity that drove him to insanity, and vengeance, and that Gordon and the others at the GCPD never took him seriously as an intellectual powerhouse, and now they’ll all pay for it. Likewise, Nygma also pokes at the reality that Gordon is a killer to great effect, and in some respects, he may be no better than the people he aims to put away, especially after his murder of Theo Galavan earlier in the season.

Gordon manages to escape Nygma upon his unmasking, even if he’s shot in the leg in the process, and this allows him a nice connection to the ongoing Bruce/Selina arc, as the two teens start robbing criminals, though Bruce refuses to take payouts, instead leaving his stolen money for the city’s population, much to Selina’s chagrin. After a wounded Gordon stumbles into their base, Bruce has no choice but to call Alfred, and this gives him an excuse to return to Wayne Manor, with Gordon in tow. 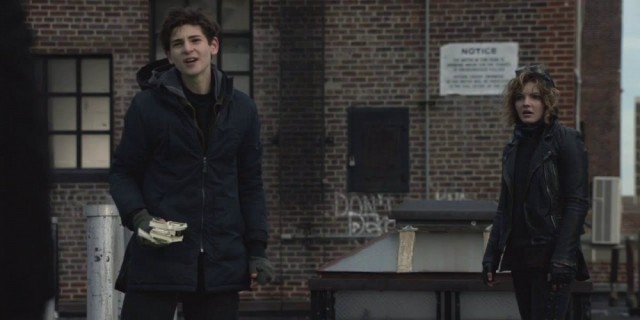 This is the only element of the episode that felt noticeably contrived and annoying, as it leads into Alfred giving Bruce an ultimatum that says that, if he wants to continue on the trail of his parents’ murder, he needs to abandon his mission with Selina, and cease contact with her. If he stays on the streets, he has to give up the investigation of who hired Matches Malone to kill his parents. This is odd and forced, especially for the often especially harsh, no-nonsense Alfred of the Gotham universe, since it doesn’t make sense for Alfred to suddenly doubt Selina, and think that she can’t handle herself. Earlier in the series, Alfred was worried about Selina being too dangerous for Bruce, but now he’s worried that Bruce is too dangerous for Selina? Huh? That doesn’t really hold water, and it just feels like a lame excuse for the show to ditch Selina for a bit, especially since it’s obvious that she’ll be back in Bruce’s life before long.

Regardless, Gordon at least manages to enact a smart plan with Selina, where Selina pretends to go into the GCPD and blab Gordon’s vague whereabouts, in hopes of snagging the $10,000 reward that Barnes and the GCPD are offering for information that leads to Gordon’s arrest. Knowing that Nygma will be listening in on intel related to Gordon and Penguin seeking a buried body, Nygma predictably panics, and goes back to the burial site of Ms. Kringle, with Gordon and the cops following (I guess the cops trusted Gordon pretty quickly off-screen, for some reason), and witnessing Nygma admit to the murder, and to his actions as the budding Riddler over the past couple of episodes. After Nygma is arrested, Barnes offers Gordon his old position, but after help from Bruce, Gordon realizes that he still hasn’t finished finding justice for the boy, even after Matches Malone has been identified and is now dead. It looks like the rest of the season will again revisit the Wayne murders, but I suppose that’s fair enough, since we’ve at least had some good forward movement there lately.

Another big highlight in this episode was Penguin, who attends the funeral of his father, and manages to talk his step family into adopting him as a servant. Naturally, Penguin is mocked, abused and constantly berated for even trivial things, which starts gradually undoing Strange’s therapy, but it’s not until Penguin discovers the poison that killed his father that he fully goes over the edge. This led to one of the best and most frightening scenes of the episode, as Penguin literally kills and cooks his step siblings, then feeds them to his father’s wife, before savagely stabbing the wife to death, and eating dinner across from her bloodied corpse. Looks like Penguin is back, and not a moment too soon!

By the way, speaking of Hugo Strange, we do get to check in with him a bit this week too, as Arkham Asylum’s experiments are ongoing. It’s Barbara that’s the big focus of Strange’s latest appearance, as she’s gone to seemingly successful routine therapy sessions, and as a result, Strange is prepared to release her into the city. Ms. Peabody isn’t sure why Strange used far more gentle therapy tactics with Barbara versus Penguin, but Strange claims that just because the asylum has a nice big hammer, doesn’t mean every patient is a nail. Nonetheless, Strange releases Barbara with the full intent of treating her as another Penguin-esque experiment, and that should rope Gordon back into Strange’s web, as the episode ends with Barbara showing up at Gordon’s doorstep, mere moments after he tries and chickens out of calling Leslie! Even with Barbara seemingly ‘cured’ from her Maniax persona, this is a very promising development, with viewers no doubt not trusting Barbara any more than Gordon clearly won’t.

“Into the Woods” seems to be positioning the show to start gearing up for the end of Season Two, polishing up the recent ongoing story arcs, so that it can build towards the finale with fresh material. Fortunately, just about all of the plot resolutions in this episode were great, with only the Bruce/Selina arc finishing on a bit of a sour note, as Gotham must awkwardly strain to get Bruce and Alfred back into the Wayne Enterprises conspiracy. There also seems to be more hints that Wayne Enterprises and Arkham Asylum/Indian Hill will ultimately be tied together before the end of the season, hopefully continuing the potential of Hugo Strange as this show’s best villain yet, even as Penguin returns to his former self, and Nygma has fully fallen to the dark side.

Gotham 2.17: "Into the Woods" Review
Gotham capped off several of its recent story arcs to good effect this week, as Gordon finds who framed him, Penguin returns to his old self, and Barbara gets a clean bill of mental health.
THE GOOD STUFF
THE NOT-SO-GOOD STUFF
2016-04-12
83%Overall Score
Reader Rating: (0 Votes)
0%