After Jimmy spent so much time in the wringer over the course of this series, it was Chuck who was really pushed to new emotional and physical levels this week, as he botches the initial hearing over the new Mesa Verde branch, due to Jimmy altering the documents. With Chuck appearing incompetent, arrogant and ailed, HHM’s new clients re-think their decision to go with the bigger firm, and decide to sign with Kim’s new solo firm again. It appears that Jimmy’s plan worked, and Kim got the happy ending that she wanted!

Given that Chuck is a brilliant attorney though, Jimmy didn’t exactly get away without a hitch. While Kim took Mesa Verde and all related case documents for free after Jimmy’s act, Chuck calls Kim to his house, with Jimmy tagging along, only for both of them to see that the locks have been changed. Despite Jimmy being present, Chuck goes through with his original plan of telling Kim all about the apparent sabotage, after believing he figured out how Jimmy got one over on him, and goaded Mesa Verde into re-signing with Kim.

Surprisingly though, despite Chuck perfectly putting together Jimmy’s plan, and correctly identifying him as the cause of the mix-up, Kim takes Jimmy’s side, and cuts Chuck deep in regards to how he never wanted Jimmy to succeed, and has become so arrogant that he can’t admit to the possibility that he made a mistake. Kim also points out that Chuck has no real evidence, and has nothing but his word in terms of pressing charges against his brother. It seems like Jimmy completely got away, despite Chuck’s suspicions, but in the car later, Kim punches Jimmy in the shoulder several times, and is blatantly angry. Despite sticking up for Jimmy, she seems to be fully aware that he is indeed the culprit for her regaining of Mesa Verde as a big client.

Kim’s been on Jimmy about being honest and walking the line of the law all season, but the relationship between Jimmy and Kim evolved like never before in this episode. Jimmy, of course, is up to his usual antics, even shooting another commercial shot for his own new firm, within a childrens’ schoolyard, obviously without permission. This led to a welcome reprieve for the emotional destruction throughout the episode, as Jimmy must tell a ridiculous tall tale about filming a documentary about a famous musician that he falsely claims attended the school, when he’s inevitably caught by school officials. When the officials decide to verify his claims, Jimmy hurries his regular student film crew, now with an additional make-up person, in order to get the shot as quickly as possible. Even if it means throwing his brother under the bus, Jimmy won’t change.

It’s a good thing that Kim ultimately resigns herself to Jimmy’s ways then, as the episode winds down with the two in bed together. as Kim seemingly idly tells Jimmy that if he’s going to make an adversary out of his brother, he’d better have erased any shred of evidence, since Chuck is brilliant enough to turn even the smallest lead into a credible case. This has Jimmy hurrying back to the copy shop, and seeing that Ernie has beaten him there. After some quick thinking, Jimmy bribes the cashier, and stays in the shadows as Chuck inquires about Jimmy’s whereabouts himself, even ditching his electricity-repelling blanket in the process. 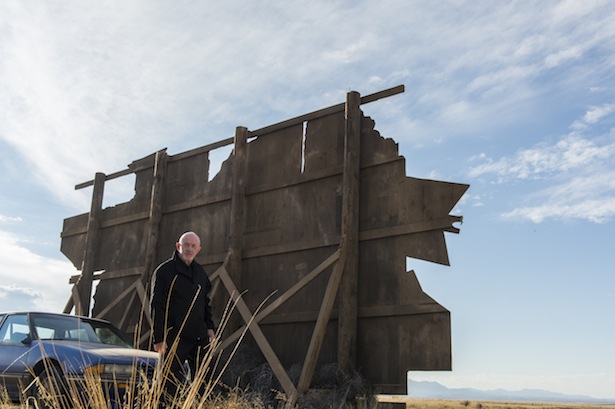 Unfortunately, Chuck’s candor and desire for justice comes at a big price, as he starts tripping out, reacting harshly to the bright lights of the copying store. Eventually, after he fails to convince the cashier to tell him that he saw Jimmy making copies and forging documents, Chuck loses his balance and falls, hitting his head on a counter and falling unconscious. This was a fantastic way to lead into the season finale, as the unforeseen consequences of Jimmy’s actions immediately hit him, and all he can do is whisper to himself that they need to call 911. Jimmy, of course, is helpless to intervene, and that made for an even better scene to close the episode out on, as next week’s season finale could have some very grave consequences for Chuck!

Mike’s storyline, while still completely separate from Jimmy’s, also hit some great strides this week. After using his homemade spike strip to sabotage a truck driver’s ride, Mike steals some hidden money of Hector’s from the tires, leaving no trace of his existence. This infuriates Hector, who starts poking around for information, leading to Nacho contacting Mike, and deducing that Mike did it pretty quickly. While the storyline was separate, this was a decent way to tie the Mike plot into the Jimmy plot, especially after much of Season Two has kept the two storylines almost completely disconnected, since Mike also had to deal with someone knowing that he did something, not being able to prove it, and then this lack of proof leads to tragic consequences for someone else. In Mike’s case, a bystander that found the driver that Mike refused to kill ended up being murdered by Hector to keep the story out of the papers, though this only seems to strengthen Mike’s resolve to hit Hector where it hurts. I doubt that this bystander is going to be the only casualty of Mike’s battle against the Salamanca family, even by the end of this season.

“Nailed” presented among the best storylines that Season Two of Better Call Saul has had to offer, and has the show entering its season finale on an incredibly strong note. As both Jimmy’s and Mike’s vendettas start to leave tragedy in their wake, and as Kim must grapple with the dark consequences of securing her future, the series is poised to close out its current season on a very dramatically powerful note. The idea of Chuck’s life hanging in the balance is certainly not inconceivable, as Chuck appears to be dead by the time of Breaking Bad, or at the very least completely estranged from Jimmy, by the time he forms his identity as Saul Goodman. Jimmy and Kim may have everything they need to start their new law firms on the right note now, but that begs the question; Was it worth it?