Lucifer once again hit upon a highlight episode for its debut season in, “St. Lucifer” this week, which managed to find another particularly solid case-of-the-week to blend with Lucifer’s latest curious whim about mortality. The episode was quite busy, sometimes to a fault, as the show approaches its final couple of episodes before Season One concludes, but now that we know for sure that Lucifer is getting a second season, the series feels all the more enjoyable and easy to invest in, further helping an already great episode.

A big reason why this episode was particularly entertaining, as with many of the better episodes this season, is that the case-of-the-week is pretty clever, and ties well into Lucifer’s key storyline. Since the latest victim is a philanthropist who genuinely gave to the world out of sheer kindness, expecting nothing in return, Lucifer is initially smug, before realizing that doing good deeds gives him a sort of high that he can’t explain. Linda warns Lucifer that goodness is not a toy, but naturally, Lucifer perceives it as such, and goes to predictably ridiculous lengths to replicate the high of charity toward others. 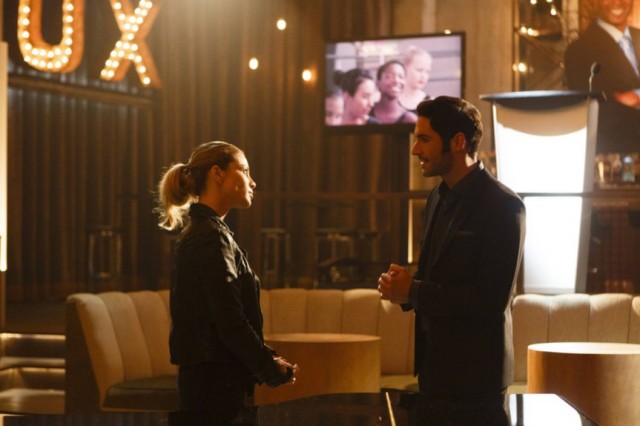 Chloe, meanwhile, is left to do the actual investigative legwork, and the case provides some decent twists and turns with her perspective. Initially, a troubled Haitian patron of the victim’s charity efforts appears suspicious, though suspicion soon finds itself to the wife, and then to the attorney, who is cagey with information, and looks especially guilty. We even get a pretty solid twist presenting itself, after Lucifer makes a display of singing at a mourning event, which irks a man that turned out to be the guy’s hidden lover. Yet another solid suspect to have suspicion on, especially with the twist of the victim being gay and in the closet, yet being married to a woman. Alas though, this man-stress is innocent. In fact, he’s one of the key players in helping Chloe get to the bottom of the case.

Even the attorney, surprisingly, turns out to be innocent, and just as giving and loyal as the victim was. The lawyer is so honest in fact, that Chloe has to actively twist his arm to surrender vital facts that could lead to the actual culprit, which made for a pretty unexpected turn, especially since Chloe had to spend most of the episode investigating alone. This is because she’s hardly amused by Lucifer’s latest distraction of trying to do good for the sake of self interest, and a small rift forms between the two, as Lucifer blows off the investigation in favour of setting up a post-mortem charity event at Lux for the victim.

This charity event served as a pretty satisfying climax, since it finally started offering explanations about Lucifer’s fluctuating mortality. Before things properly get started, Lucifer is actually confronted by Malcolm, who reveals that Amenadiel has charged him with killing Lucifer, and thus sending him back to Hell. Lucifer however manages to talk him down, and even gives Malcolm his Pentecostal Coin in exchange, revealing that the coin allows passage through Hell, and can even easily allow Lucifer to travel in and out of Hell as he deems fit. Given that this incarnation of The Devil is surprisingly honest and straightforward, unlike many interpretations of the Prince of Darkness, it’s likely that Lucifer is telling the truth, which should lead to interesting developments toward the end of the season, as Malcolm is quite literally given a passage out of Hell, so he can escape, even if he ends up back there.

Regarding the case however, the victim’s wife is the guilty party, and after Lucifer sniffs this out, he ends up shot and seemingly dead. Surprisingly though, Lucifer is completely fine, which is discovered when Dan appears to make it to him too late. Oh, speaking of Dan, the episode cuts back to him every so often, after he is taken captive by Malcolm, and manages to escape. This makes his capture completely pointless, and honestly, the show might have been better off not even bothering with temporarily incapacitating Dan in the end. Regardless, with Lucifer and Chloe both reaching the wife at the same time, the two arrest her, and Lucifer gives up the quest of doing good for selfishness’ sake, after thinking that he’s isolated the high from catching criminals, again.

Somewhere in all of this business, Maze crashes a dinner of Amenadiel’s, continuing the sexual tension between these characters, and not long after, they hook up with each other. This is a twist that many viewers no doubt would have seen coming, but what’s more surprising is that Maze uses the unholy romance as leverage to get back in Lucifer’s good graces, proposing that she can use her new position to spy on Amenadiel. Lucifer was ready to forgive Maze regardless, after his time toying with good deeds, though the timing of this turns out to be beneficial, as Lucifer puts together a theory.

Upon visiting Chloe, who confesses her emotional vulnerability around Lucifer, Lucifer quietly cuts his hand behind her back, which sure enough, bleeds as a mortal would. This was an awesome story development, since it adds more effective mystery to Chloe’s character, and her undeniable divine connection to Lucifer and his time on Earth. Is Chloe human? Is she who she says she is? I have a feeling that we won’t get any more answers until the season finale in a couple of weeks, but it’s still interesting to think about, and definitely improves Chloe’s character from the somewhat stock detective-type that she was at the start of this series.

“St. Lucifer” feels like an especially welcome episode, in that it’s a particularly strong offering that happens to come on the heels of FOX announcing that Lucifer has been renewed early. The episode greatly justifies why this series deserves to go on past its initial thirteen episodes, especially when it starts laying the foundation for big story developments to come by season’s end. The episode had to cram in a lot of story developments all at once, and occasionally lost focus because of that, but fortunately, this didn’t diminish the frequently great storytelling throughout proceedings. With the next piece of Chloe’s puzzle in place, and Lucifer getting the upper hand over Amenadiel in more ways than one this week, The Devil is indeed riding high in the final reaches of Season One, and hopefully, there’s no stopping him on this series!

Lucifer 1.11: "St. Lucifer" Review
Lucifer hit another high note this week, thanks to a solid new flight of fancy for Lucifer, and a shocking reveal for Chloe.
THE GOOD STUFF
THE NOT-SO-GOOD STUFF
2016-04-13
85%Overall Score
Reader Rating: (0 Votes)
0%