After a merely decent start to the serialized season finale storyline that began a couple of weeks ago, Brooklyn Nine-Nine got a bit of a boost with, “Bureau” this week. Adding an inspired new wrinkle to the mission of apprehending those hunting Pimento, this episode’s main storyline had Holt contacting an old associate in the FBI, Bob Anderson, played in a standout guest role by 24’s Dennis Haysbert.

Anderson essentially functions as the FBI version of Holt, and the comical interplay between Andre Braugher and Dennis Haysbert was very funny throughout the episode. There were all sorts of self-aware jabs littered about Holt’s character throughout the episode via Anderson, who essentially takes the Holt character to the next level, and brings out an even new layer of hardcore by-the-book professionalism, even when it comes to pleasantries and chocolate bars. This character dynamic also made the immature Peralta and stoic Diaz the perfect personalities to offset Holt and Anderson in the main storyline too.

Anderson’s introduction leads into arguably this episode’s best storyline, where Holt, Diaz, Peralta and Anderson must enact a heist to get top secret information out of the FBI archives, after they identify the hand-off man that was formerly discovered during Pimento’s botched bachelor party. The training and execution of this heist is highly amusing, between Peralta having to try and learn to do chin-ups with Jeffords, to Gina teaching Holt all about Sex and the City, simply so he can distract the guard manning the security cameras.

Speaking of Jeffords and Gina, it’s too bad that they couldn’t participate in the heist proper, even if it wouldn’t have made much sense for Gina to be involved in any official capacity. Instead, Jeffords and Gina are banished to a subplot that was oddly disconnected from everything else. The subplot was fine in terms of humour, having Jeffords try and plug a leak in the precinct when arrest numbers for the Nine-Nine get published by a reporter early, but given the push to a serialized story that incorporated everyone at the precinct to close out the season, it’s weird that Gina and Jeffords, and even Scully and Hitchcock, have now been put on the sidelines. This no doubt leads to several missed opportunities for jokes in the FBI heist, though fortunately, Haysbert’s great guest turn helped to distract from this.

While the heist and leak probing are going on in Brooklyn proper, Santiago and Boyle remain at the womens’ prison in Texas, trying to squeeze information out of Maura Figgis, who is predictably tight-lipped about her criminal dealings. Boyle taking over the undercover operation had some pretty strong laughs, especially when Peralta inexplicably makes him Jewish, though things get complicated when Maura catches Santiago hugging Boyle, and gets suspicious… Or so it appears. Instead, Maura becomes attracted to Boyle, and tries to seduce him in the medical room, despite Boyle about to adopt a child with Genevieve. 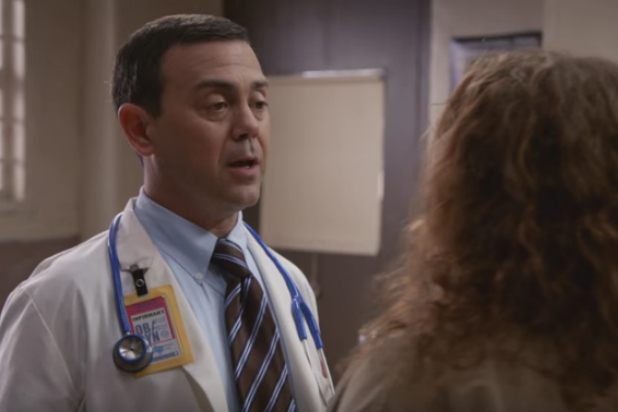 Oh yeah, that kind of came out of nowhere, didn’t it? Despite Boyle and Genevieve looking into fertility treatments, apparently, Boyle’s sterility is so aggressive that it may have passed on to Genevieve. How does that even happen? Well, it doesn’t matter, as this story turn is strangely just played as a way to get Maura off of Boyle’s back, and instead confiding in Santiago, after she becomes dismayed that she only attracts dishonest, cheating men. Boyle adopting a child, and having the adoption successfully go through, is a pretty big deal. Why wait until the very end of the season to bring this up? Moreover, why just treat it as a story device? This feels like something that really should have waited until Season Four, which is no doubt the next time we’ll hear about it.

Fortunately, the heist ends up going as planned, in any case, though the hand-off man is found shot and bleeding out later, with the detectives barely saving him. With the corrupt agent about to wake from a coma in around twelve hours, Peralta and Diaz step out, and Peralta even tells Santiago that they apprehended the agent… Only to have Santiago tell him that Maura revealed two corrupt FBI agents in Figgis’ employ, with the other being one Bob Anderson. Oh dear. It’s too late though, as Anderson holds Holt at gunpoint right at the end of the episode, saying that Holt now has to die. Holt no doubt won’t die, as there’s no way that this show would kill off arguably its best character, especially being a light-hearted sitcom, but it will be very interesting to see how he gets out of this mess. 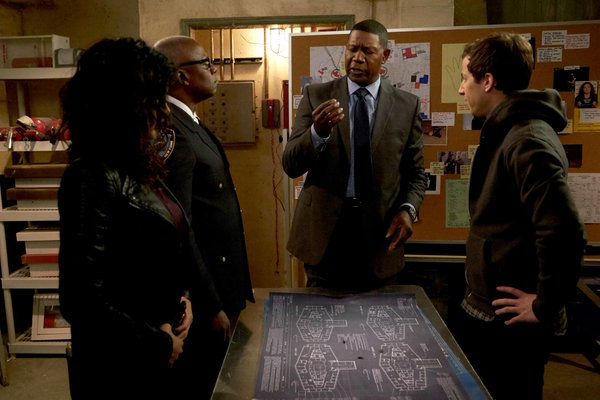 Brooklyn Nine-Nine looks like it will be concluding its standout third season on a pretty solid note next week, if the promise that resulted from this storyline’s fallout is any indication. With Anderson being bad news, Holt’s life being on the line, and both Santiago and Boyle still being stuck in Texas, the precinct is crippled as it prepares to take on its greatest threat to date. Is whoever’s left over at the Nine-Nine enough to save the day? Probably, but it will still be fun to see exactly how they do it in next week’s season finale.

Brooklyn Nine-Nine 3.22: "Bureau" Review
Captain Holt reunites with his perfect match in a fun episode of Brooklyn Nine-Nine this week, while Boyle and Santiago must get creative to get information on their target.
THE GOOD STUFF
THE NOT-SO-GOOD STUFF
2016-04-13
84%Overall Score
Reader Rating: (0 Votes)
0%