NOTE: Full spoilers for this episode of “iZombie”, including multiple major character deaths, are present in this review

After the superb setup presented in the first half of iZombie’s two-episode season finale, the second half, “Salivation Army”, proved to be just as exceptional an episode, and a perfectly satisfying conclusion to Season Two. With Liv and Major indulging on soldier brain to break into Max Rager during the big party for the launch of the Super Max drink, the show once again ditches its usual case-of-the-week format for this episode, and continues to focus entirely on wrapping up storylines from the season.

Yet again, this works to the show’s benefit very well, especially with Babineaux now being brought into Liv’s inner circle of those who know about the zombie condition in Seattle. Babineaux however initially chooses to sit out the mission to infiltrate Max Rager, since he has no legal precedent to enter the company grounds, much less poke around its secret zombie lab, and this forces Liv and Major to go alone, disguised as prison guard-inspired servers at the party. Hilariously, none of the other solider-like servers seem suspicious at how short Liv is in contrast to everyone else either. 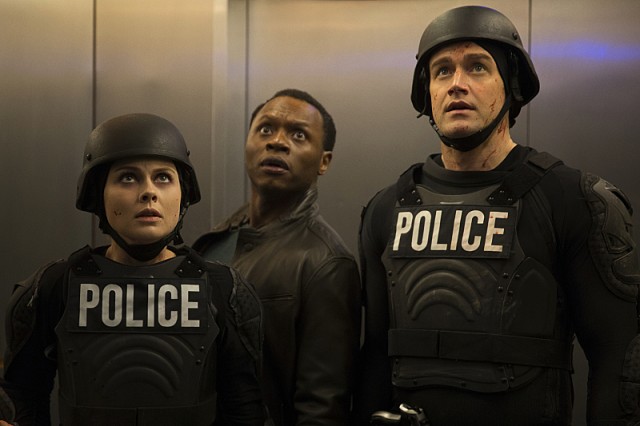 Already, this is a pretty promising setup for the final episode of iZombie’s second season, but things really kick into high gear at the party proper, when the young, impressionable scientist that Major thinks can get him and Liv clearance into the basement lab, turns out to have stolen a stash of Utopium to share with his friends. It wasn’t exactly what the group thought however, as the drug turns them into rabid, highly aggressive and fast zombies, who immediately and insatiably crave human flesh. Babineaux has the unfortunate timing of deciding to follow Liv and Major at that point as well, making him a target for the zombie hordes, as, unlike Liv and Major, he’s still fully human.

Right when Vaughn appears to corner the three, their captors are immediately taken out by the zombies, though this forces the trio to flee, as the entire party is torn apart and eaten by the rampaging zombie hordes, including showrunner, Rob Thomas, who cameos as himself (sort of), playing an old favourite from his (supposed) Matchbox Twenty days at the event (referencing that other Rob Thomas)… Until he’s eaten anyway. We hardly knew ye, Rob Thomas. All kidding aside though, this surprise twist of the zombie outbreak within Max Rager made for a surprisingly exciting way to close out the season, especially since it’s probably the most action-packed that iZombie has ever been to date! It’s also smart to have everything contained within the Max Rager building, as this means that the scale of the show isn’t blown up too much too soon, especially since we now know that iZombie is definitely returning for a third season this Fall.

After becoming trapped and surrounded by bloodthirsty zombies, Liv debates scratching Babineaux, and fully converting him to Team Z, which is an interesting idea, but sadly, it doesn’t come to pass. Instead, Liv, Major and Babineaux are bailed out by the leader of the private military corporation that just bought out Max Rager, who re-arms the group, and tells them to get out of dodge. Of course, Liv and Major’s mission is not yet done, and they end up stealing a hand to get into the basement lab, while the PMC soldiers deal with the zombies above.

Here, the Max Rager story comes to a head, as the group encounters Rita, still in a zombie state, though after Liv and Babineaux move on to the next room, Vaughn shows up and seals them in, confronting Major, and taunting him about his choices. Now desperate and left with nothing, Vaughn attempts to unleash zombies on Major, who are uninterested in him, naturally. It’s here that Vaughn realizes his big miscalculation, not knowing that Major is a zombie himself, and Vaughn then decides to just gas the room, and leave both Major and Rita for dead. Fortunately, Major’s axe allows him to cut his way out, and right as Vaughn becomes cornered in his elevator, Major can climb on top of it, and recall Vaughn’s metaphor about the submarine hero from the movies. Major passes Vaughn his axe as the zombies pour into the elevator after him, including Rita, though despite that, Vaughn is quickly eaten and killed. This also leads to Rita entering the berserk zombie state, though she’s put down herself soon after. Yep, not only was Max Rager destroyed, but the du Clark family has fully kicked the bucket now. It’s sad to see Vaughn go at least, but his end was very poetic and satisfying, which is awesome.

While all of that chaos is going on, Blaine flees the goons of Stacey Boss, who has learned that Blaine’s business is still alive, and thus sends some thugs to get rid of Blaine’s successors. Chief is unfortunately shot through the head right away, and Don E. is left wounded, though will no doubt recover, given his zombie state. Regardless though, Blaine flees to Liv’s place to see Ravi and Peyton, though after he leaves upon Ravi’s suspicion, the henchmen show up at the apartment, and Ravi is knocked out, just in time to see Peyton dragged off. 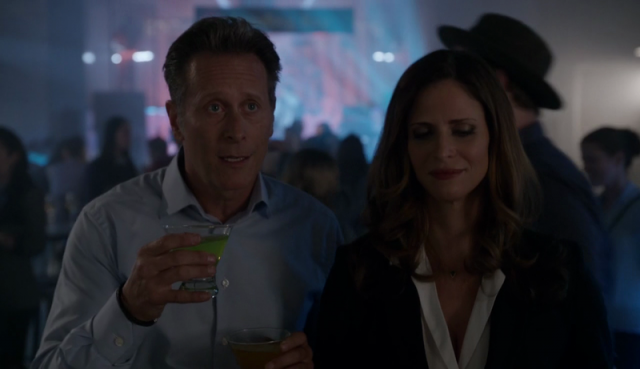 This beautifully had Blaine on the path to redemption, as he and Ravi take up arms, and decide to take Peyton back directly. Ravi is told to stay behind however, as Blaine borrows Major’s old night-vision goggles, and uses them to shoot up all of the bad guys, and rescue Peyton unscathed. Ravi attempts to run in soon after, but sees Peyton embracing Blaine, and that’s where we leave these three with the conclusion of Season Two. Could Peyton restart her romance with Blaine, now that he seems to have officially become a good guy? Where does that leave Ravi? Man, poor Ravi really can’t catch a break with women, can he?

That resolution paled in comparison to the mess left behind as Liv, Major and Babineaux collect themselves too, especially after a close shave with a fully-turned Drake forces Liv to shoot him through the head in order to save Babineaux’s life. Wow, this episode has a pretty big body count, doesn’t it? Liv doesn’t yet have time to mourn however, as she goes upstairs to see that the PMC leader and outfit all seem to consist of zombies, happily munching on Rob Thomas’ brain! Whoa! As the episode and the season ends, the leader tells Liv about how Seattle will become the capital of the coming zombie order, and then asks if Liv is with them or against them. Good question, since it’s anyone’s guess as to whether these soldiers are good or bad, and it looks like we won’t have Liv’s answer until Season Three, since that’s where the episode concludes.

“Salivation Army” was a fantastic way to cap off this season of iZombie, presenting the show’s most exciting episode to date, and taking apart one of the show’s big antagonists completely, only to have a possibly larger threat immediately rise in his place. Vaughn du Clark, Rita du Clark and Max Rager may be no more, but the idea of a fully outfitted, militarized outfit of private zombie soldiers could possibly be even worse for Seattle’s prospects, not to mention the world’s! There’s also the lingering issue of Stacey Boss still being at large to consider, especially when the DA’s office drops all charges against him in this season finale, leaving Boss stronger and more untouchable than ever. With the end of Season Two, iZombie is poised to move on to Season Three with all of its freshness and intrigue intact, and that’s an excellent thing for a CW series that continues to be one of television’s best dark horse hits!