NOTE: Spoilers from throughout the second season of “Better Call Saul” are present in this review

After managing to beat the staggering odds and effectively live up to the incredible pedigree of Breaking Bad last year in its debut season, Better Call Saul has now wrapped its second season this year. While the first season explored the question of why Jimmy McGill was motivated to start distrusting the righteous path and begin his transformation into infamously crooked Breaking Bad attorney, Saul Goodman, Season Two was all about exploring how Jimmy ultimately got himself into a position of no return, especially as the season’s conclusion appears to permanently destroy the bond between Jimmy and his brother, Chuck.

Despite Jimmy appearing to walk out on his big offer at Davis & Main at the end of Season One, Kim ultimately convinces him to take the job, and this has Jimmy seemingly living the dream. He’s got a nice office, plenty of support, and no shortage of high-paying cases to work. It seems like the series should end there… But if you have even a passing knowledge of Breaking Bad, then you know that this obviously isn’t meant to be.

Surprisingly, rather than stumbling over the fact that we know how Jimmy’s story will end, something that was addressed right from its very first season in the series premiere last year, Better Call Saul still uses the over-arching tragedy behind the series remarkably well. Every victory feels bittersweet, because we know it’s never permanent. In a way, Jimmy does too. Season Two has Jimmy start out with pretty much everything he wanted from his future lining up, and it’s very interesting to see that, in the span of a mere ten-episode season, the conclusion of Season Two seemingly has Jimmy more vulnerable and threatened than ever before. How quickly we can lose success, it seems.

Of course, a big part of this was Chuck starting to take the gloves off with Jimmy. Chuck returned to work at Hamlin, Hamlin & McGill more than once during Season Two, even powering through his electrical aversion to boot! Chuck pushing himself so hard certainly has consequences, especially in the season finale, when an injury has Jimmy once again pondering the likelihood of Chuck being mentally ill. Despite that however, Jimmy stands by his brother. That was another very effective element of tragedy in this second season; Chuck’s loyalties to Jimmy crumbling as Jimmy’s loyalty to Chuck stands unwavered, despite Jimmy being far more morally flexible than the no-nonsense, straight-edge Chuck is. 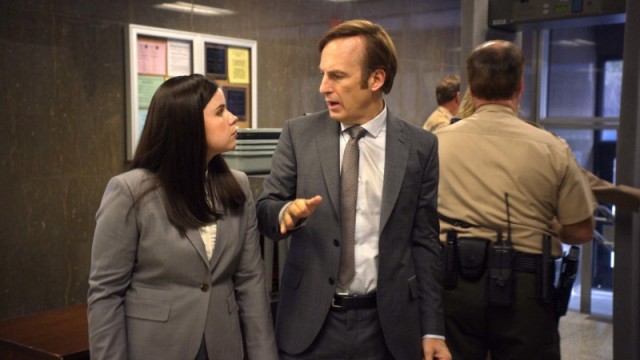 As awesome as Jimmy’s storyline often was throughout this season though, Kim also got standout material, as her relationship with Jimmy deepened, and she started to find herself sucked ever more into Jimmy’s cursed gravitational pull. After a mishap by Jimmy has Kim losing her station at HHM, Kim finds herself banished to the document room, and eventually, after handing HHM a big client and not getting any thanks for it, Kim finds the resolve to quit the firm. By the end of the season, Kim and Jimmy have entered business together, or at least a business space, as their separate law practices now share a building right beside each other. Kim is closer to Jimmy than she’s ever been, and now Jimmy’s failures have become her failures, and that’s something that should become more apparent than ever in Season Three next year.

Of course, Mike Ehrmantraut, Jimmy’s main right-hand man, was still a big part of the show in Season Two, and his arc put him right in the crosshairs of not only the returning Tuco Salamanca, but also a pre-stroke Hector Salamanca, who made his way to Better Call Saul for the first time! There’s still no trace of Walter White or Jesse Pinkman on this series yet, but the introduction of such a pivotal Breaking Bad antagonist on this prequel/spin-off series was very cool. This also presented another morally grey conflict for Mike, who must reluctantly take a deal from Hector to get Tuco off the hook for a crime he commits after hassling Mike during a job Mike does for fellow Salamanca goon, Nacho, granting Mike money that he needs to put up his mentally fragile daughter-in-law in a better house, which quickly gets sticky, due to said Nacho affiliation.

Mike’s conflict was decent, though it was mostly overshadowed by the character arcs of Jimmy, Kim and Chuck, since it feels like Mike drifted too far away from the main storylines this season. Perhaps the introduction of Hector Salamanca, and a mysterious party (likely Nacho) preventing Mike from assassinating Hector in the season finale will link everything back to Jimmy’s present situation in Season Three, but in Season Two, Mike just felt like a filler character who might as well have been starring in his own spin-off. There were still a few instances where Mike encountered and relied on Jimmy, but considering how well Season One managed to tie these two character arcs together, it was disappointing that Season Two couldn’t seem to give Jimmy and Mike complementary storylines that could feed off one another like last year.

Better Call Saul is still a far better show than most television offerings in its second season, though Season Two did dip a small bit in quality compared to the stellar first season. That’s not too big of a deal when the sheer quality of this show is still eclipsing most other shows currently on the airwaves, but a few tweaks could see Season Three recapturing that standout quality from Season One, especially as far as linking Jimmy’s and Mike’s storyline goes. With Chuck now having all of the ammo he needs to take down his brother for good, and both Jimmy and Mike at the mercy of powers they don’t yet properly fathom, Season Three should continue to be a very compelling descent into Hell for the man who would become Saul Goodman, especially since’s still got no shortage of good intentions.

Better Call Saul: Season Two Review
Better Call Saul's second season doesn't quite measure up to the first, but it's still among the best offerings on television, even while Jimmy and Mike drift too far apart.
THE GOOD STUFF
THE NOT-SO-GOOD STUFF
2016-04-27
87%Overall Score
Reader Rating: (0 Votes)
0%