We’ve finally come to that mandate for shows about powered DC superheroes; An episode that’s all about the title hero struggling to come to grips with having their powers taken away. CBS’ Supergirl also boasted such an episode in the standout, “Human for a Day” this season, though the variation for The Flash, this week’s episode, “Back to Normal”, doesn’t quite achieve the same high point. It’s still a good overall episode, but its wasted villain and faulty family drama sometimes undermine an otherwise solid storyline.

Obviously, the focal point this week is Barry re-adjusting to life without his speed, though a subplot also checked in with Caitlin, who is now imprisoned on Earth-Two within Zoom’s lair. Caitlin’s subplot exceeded the appeal of the main plot in many respects, since she really brought out the dueling psychologies between Jay Garrick and Hunter Zolomon, as she engages an unmasked Zoom and declares that she can never forgive him for his lies. Zoom wants Caitlin around because he loves her, but it’s clear that Caitlin can never return that love, now that she knows who, “Jay” really is underneath the metaphorical mask.

Another great element to the Caitlin subplot is her encounter with Killer Frost, her villainous Earth-Two doppelganger, which also nicely highlighted the world of difference between Caitlin and her evil alter-ego from the parallel world. It might seem odd that Zoom would spare Killer Frost after the big Earth-Two episodes from earlier this season, but the explanation that her resemblance to the Earth-One Caitlin leading to Zoom wanting to merely imprison her made sense. In any case, the two women have eerily similar family and work histories, though the turning point for Killer Frost was that she instead failed out of medical school, right around the time she was mutated by the Dark Matter wave from the Particle Accelerator explosion, which obviously didn’t affect Earth-One’s Caitlin. The hint that Caitlin could have a lost brother of her own on Earth-One, just like Iris, after Killer Frost mentions a dead brother, is pretty interesting, though it was even more interesting to reveal that both Caitlin’s have mothers that are said to have rather, ahem, cold personalities. Might the show be foreshadowing the more well-known Louise Lincoln version of Killer Frost to come onto the show as Caitlin’s mother later on? That would certainly be pretty cool!

Regardless, Caitlin breaks Killer Frost out of prison, believing that her doppelganger can help her return to Earth-One, though unsurprisingly, Killer Frost betrays Caitlin, and is about to kill her, before Zoom rushes back. Catching a flying icicle, Zoom impales Killer Frost on it and kills her before Caitlin’s eyes. He then delivers a stern warning to Caitlin, saying that if she frees the masked man tapping in Morse Code, he will die as well. Just who is that masked man?! We don’t have time to wonder much anew though, as Caitlin eventually convinces her captor to take her back to Earth-One, though seemingly also so Zoom conquer it, right as the episode begins to end and goes into the epilogue. That’s not good.

Back on Earth-One, the team is reeling from Barry’s lost speed, as well as Caitlin being taken captive by Zoom. Without Barry’s speed, there’s pretty much no way to get Caitlin back, which leads to Wells throwing up his hands, and deciding that he needs to flee with Jesse again. Tracking Jesse to Opal City, Wells tries and fails to convince Jesse to run away with him, since Jesse wants to start a life completely separate from not just Zoom, but also her father. Predictably, Jesse is still pretty furious with Wells, due to Wells murdering The Turtle a few episodes back in order to save her from Zoom.

Wells being torn between S.T.A.R. Labs and Jesse is an interesting idea, but unfortunately, the episode doesn’t linger on it for long. Similarly interesting is the idea of Jesse joining everyone at S.T.A.R. Labs, which occurs when Wells is soon after kidnapped by this week’s villain, believing him to be the Earth-One Wells, but it’s pretty apparent that Jesse is just serving as a stand-in for Caitlin while she’s away. The mention of Jesse having five majors on Earth-Two is pretty funny though, cutely referencing that she’ll probably just do whatever the show needs her to do over the remainder of the season.

If you’re a big fan of the Flash comics, you might be familiar with Griffin Grey, yet another New-Earth personality that is serving as this week’s villain. Grey is quite different than he was in DC Comics lore though, no longer being an energy-expelling menace that played devil’s advocate to future Kid Flash, Bart Allen, but now simply having superhuman strength. Like in the comics however, Grey ages rapidly whenever he uses his powers, which Barry, Cisco and Detective West discover when they chase him to an Ace Chemical plant, and fail to apprehend him. Whoa, Ace Chemical! That’s now four major Batman references that The Flash has gotten away with this season, despite FOX’s tight grip on the Batman television rights for Gotham at present. I doubt we’ll ever see The Joker in the DC Television Universe, but it was still neat to reference the place that created him in DC Comics lore. Besides, if the Supergirl universe can have a Central City, why can’t the DC Television Universe on The CW have a Gotham City, even if we never see it?

Anyway, despite the neat idea behind Barry having to stop Grey without his speed, the fact remains that, considering Grey’s key connection to the Flash Family in DC Comics lore, the show kind of wastes him as another disposable villain-of-the-week here. The usual song-and-dance plays out, with S.T.A.R. Labs coming up with a means to help Barry stop the villain, namely with a Dwarfstar-enhanced chest plate in the Flash suit that can take all of one hit before failing, and then Barry, Cisco and Detective West put their plan into action, hoping to exert Grey to death, quite literally. Eventually, Grey exerts himself so much that he does indeed collapse dead too, and thus, Wells is saved, reuniting with Jesse, who pretty much immediately forgives him. 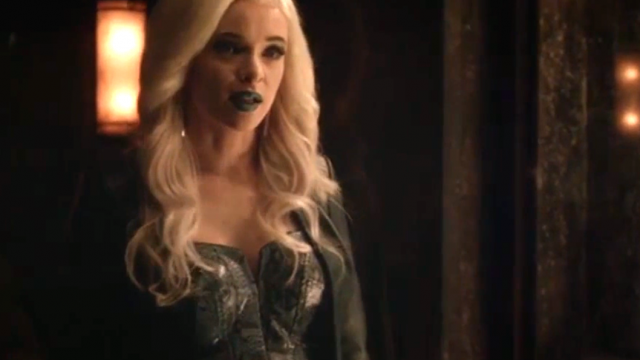 That was the other big issue with this episode, the fact that a lot of the family drama felt pretty rushed, not just for Wells and Jesse, but also for Detective West and Wally, after Wally starts pestering West to let him meet The Flash, so that he can thank him for saving his life and sacrificing his speed. First, both Jesse and West say no and refuse to co-operate, understandably, but then they just arbitrarily change their minds for practically no reason. The meeting between Wally and The Flash is pretty underwhelming too, since Wally just says his thanks, and that he won’t waste his chance to be better. That’s great and all, but did this subplot really need to take up space in this episode, simply for that? I suppose that the reunion between Wells and Jesse is at least satisfying though, even if that also felt a little rushed.

Still, “Back to Normal” provided this show’s usual entertaining standard. Even without his powers, Barry is still very much a hero, and as with Supergirl’s version of this idea from the early weeks of its debut season, this episode did a great job of proving why the title hero is so likable and uplifting, even without their powers. It was also satisfying to have Barry not get his powers back at the end of the episode either, even if Wells tells Barry during the epilogue that they need to recreate the Particle Accelerator explosion so that Barry can stand a fighting chance against Zoom. This should lead to a strong conflict next week, especially with the likely possibility of creating more metahumans to menace Central City in the process, but with Zoom racing back to Earth-One, and Barry the first and last line of defense, the S.T.A.R. Labs crew will definitely need to figure something out quickly!

The Flash 2.19: "Back to Normal" Review
Barry had to come to grips with losing his powers on a good episode of The Flash this week, even if the clever villain idea feels wasted.
THE GOOD STUFF
THE NOT-SO-GOOD STUFF
2016-04-27
80%Overall Score
Reader Rating: (0 Votes)
0%