Gotham wasted no time building on the shocking conclusion it had to its previous episode a couple of weeks ago, and after its week-long hiatus, the show returned with noticeably raised stakes in, “Azrael” this week. As the episode’s title suggests, this episode is all about bringing another recognizable Batman villain from DC Comics lore into Gotham’s canon, now tying the character into the resurrected Theo Galavan in a very inspired twist, even if this version has very little to do with its younger inspiration from DC lore.

Strange’s agenda got another added sense of development this week, as we see that Strange has become obsessed with making and crafting personalities to unleash on the city and record the results from. This is an excellent use of the character, and a great way to exploit his habits from DC lore, even with the absence of Batman for Strange to obsess over. This also positions Strange as a very large-scale villain for the show, and one that I hope sticks around into Season Three, since it seems like several of Batman’s eccentric criminal foes seem to be coming straight out of Arkham Asylum and Strange’s experimentation in this universe.

Sure enough, Strange gets to work building a new personality for Galavan, who has become savage and unstable, killing anyone in his path, as he struggles to piece his identity back together. Noticing that Galavan has memorized the bible of the Order of St. Dumas however, Strange convinces Galavan that he is the fallen son of the Order, brought back from Hell, which, in a sense, I suppose is true. Strange tells Galavan that he is Azrael, the Angel of Death, and that he must seek justice by murdering the sinner, James Gordon. That comes at rather convenient timing for Strange, as Gordon sees him right at the start of the episode, to basically reveal right to Strange’s face that he knows what Strange is up to, and he’s going to put him away for it.

The show tapping into Azrael’s function as a Batman successor at one point in DC lore is also very smart in this episode, as Azrael’s presence gives the city their first taste of a Batman-like figure, as his hunt for Gordon ensues. Gordon predictably fails to convince Barnes of the truth of what’s going on at Indian Hill/Arkham Asylum, but Barnes is forced to take notice when an armoured masked man in a cape starts attacking Gordon, capable of extraordinary physical feats, and seemingly unstoppable when in the shadows. Sounds a lot like Batman, doesn’t it? Like I said, it’s a great way to foreshadow Batman, but create sort of the antithesis of Batman, as he targets cops instead of criminals. Bruce even witnesses Azrael in action himself at one point, and you can definitely see the subtle studying in Bruce’s eyes, as if he’s gotten an idea that will permanently bond itself to Bruce’s sub-conscious mind. Little does he know, Bruce has seen a glimpse of his future, and it was another cool moment in an episode that had lots of cool moments.

Unfortunately, despite Strange sending Azrael to kill Gordon, the plan backfires in a pretty huge way, since, when Azrael attacks Gordon at the GCPD, he ends up shot off of a roof without his mask, which leads to several newscasters broadcasting the fact that Theo Galavan is alive to the entirety of Gotham City. Oops. Strange definitely didn’t plan for that, and given that there’s only three episodes left in Season Two, this mistake will likely be what motivates the GCPD to start aggressively looking into Strange’s affairs. That’s all the more true after Azrael stabs Barnes, who is now in critical condition. So far, it looks like Barnes will survive, even if he may have to abandon his post at the GCPD, though I suppose that it’s not guaranteed that he won’t die, depending on how the rest of the season pans out. Considering the hint from Barnes that Gordon should run the GCPD one day though (another neat nod to Gordon’s future as Commissioner of the GCPD in DC lore), could this be a setup for Gordon to rejoin the force as the GCPD’s new captain next season?

Another great standout plot in this episode belonged to Nygma, who has now been integrated into Arkham Asylum. Now that Nygma has fully embraced villainy, his character has taken a very interesting turn, and seeing a twisted look at how Nygma has used his intelligence and resourcefulness to make friends and thrive in Arkham is pretty great stuff. Nygma even exploits both his inmate buddies and his intellect to find his way to the secret Indian Hill area underneath the asylum proper, leaving him fully aware of Strange’s experiments. Will Nygma make the experiments all the better, or will he help to bring Strange down? Either way, Nygma’s first days as The Riddler, even if he hasn’t yet coined his villain moniker from DC lore, look to be turning out very well on this show! 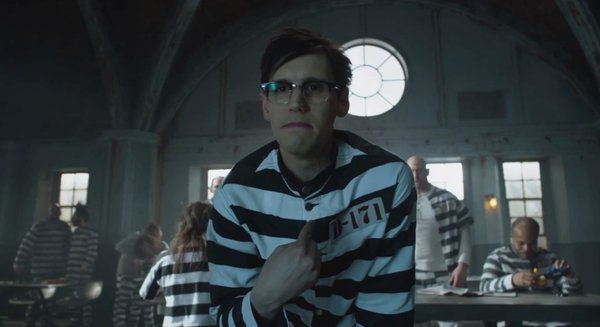 The only small gripe in an otherwise good episode that comes to mind is the fact that it sometimes gets just a tad over-stuffed, especially as it’s wrapping things up. Brief sequences are shown of Barbara hanging out with Tabitha and Butch as they watch television together towards the end, basically giving them a quick excuse to learn that Galavan is alive again. Penguin also shows up for a minute or two to simply learn the same thing. As delightfully disturbing as it was to see that Penguin hasn’t tidied up from his killing of Grace, even leaving her corpse in her meal to the point where flies have started to buzz around it, Penguin’s appearance in this episode was equally unnecessary. He could have just easily learned about Galavan in next week’s episode, and the same is true of Tabitha and Butch.

Despite that slightly rushed conclusion though, “Azrael” was still an entertaining episode, and continues to have Gotham’s stakes approaching a very promising climax for the season. With Strange’s agenda seemingly exposed to the city, and Bruce getting his first solid inspiration for his future identity as Batman, there are lots of cool places that the series could go in Season Two’s final trio of episodes. With Barnes out of commission and Gordon being proven right, it looks like the city will once again be looking to that pain-in-the-ass detective that people should really stop doubting at this point, even when he claims that Arkham Asylum is building monsters and reviving dead mayors.

Gotham 2.19: "Azrael" Review
The resurrected Theo Galavan changed the city forever in a thrilling episode of Gotham this week, as the agenda of Hugo Strange begins to be laid bare.
THE GOOD STUFF
THE NOT-SO-GOOD STUFF
2016-05-02
85%Overall Score
Reader Rating: (0 Votes)
0%