There was some confusion surrounding Ubisoft’s initial announcement of For Honor during their E3 press conference last year, which appeared to paint it as an online competitive action game that blended shooter sensibilities with melee-based medieval warfare. Turns out, that’s not exclusively the case, since Ubisoft later confirmed that For Honor can be played solo and offline, and during their E3 press conference this year, Ubisoft expanded on what exactly players can look forward to if they opt to experience the game’s Story Mode. 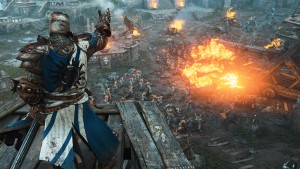 While its online multiplayer suite resembles a melee-centered medieval version of competitive shooters, the solo gameplay of For Honor has it more closely resembling a more grounded and gritty version of Tecmo Koei’s successful and long-running Warriors franchise. Players command an army of soldiers from one of three factions, The Legion (knights), The Chosen (samurai) or The Warborn (vikings), and can customize their character’s appearance, gender and a few other traits to a degree. As they mow through enemy forces, they lead their chosen faction in battle against the warlord, Apollyon, with the same stick-dictated dueling prompts from the multiplayer also showing up during key battles in the single-player campaign.

Rounding off the demonstration, Ubisoft confirmed that For Honor will release for PC, PlayStation 4 and Xbox One on February 14th, 2017. If that special someone requires a whole lot of swords and bloodshed, this could very well be the perfect gift for them!

Keep amassing to Eggplante for all major news and updates on For Honor.