UPDATE: Nintendo demonstrated live gameplay of “Mario Party: Star Rush” during the second day of Nintendo Treehouse Live coverage at E3, which showed off a game mode called Toad Scramble. This mode confirms the claim that players all roll dice at the same time, rather than taking turns on the game board, and in the case of this mode, where everyone controls a Toad, they aim to accrue Coins and Stars, along with recruiting allies (i.e. familiar “Mario” series personalities that are playable in the main gameplay) to score more dice blocks to roll. Another big focus in “Mario Party: Star Rush” is battling bosses, with Giant Goomba, King Boo and King Bob-Omb all demonstrating different co-operative boss battle capabilities as players compete for more Stars.

Nintendo opted out of a traditional E3 press conference yet again this year, and didn’t even present their traditional digital keynote at this year’s expo! This has seen a couple of stealthy announcements sneaking under the radar, one of which is for an entirely new game! 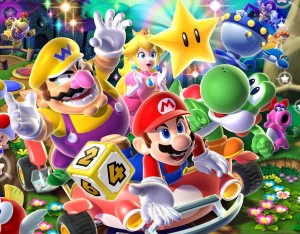 Currently, not many details are known about Mario Party: Star Rush, but keep rolling Eggplante for all major news and updates on Mario Party.