A small caveat to this is that Rhythm Heaven Megamix seems to be a digital-only game release for Western territories at this point, and can only be bought from the 3DS eShop, not at retail. On the plus side however, the game is only $29.99 USD, so it won’t set you back quite as much as other Nintendo 3DS games. That’s good, because Nintendo’s quirky new rhythm game offering looks to be just as enjoyably off-the-wall and addictive as its predecessors!

During the Nintendo Treehouse Live showcase, several rhythm minigames and challenges were shown off for Rhythm Heaven Megamix, which consists of around 30 all-new minigames, and around 70 returning minigames from prior Rhythm Heaven games, including the original Rhythm Heaven offering for Game Boy Advance that was never released outside of Japan. Some of the games shown, all of which demand following a kooky, yet precise musical beat with presses of the A Button, B Button and Control Pad, include a chameleon trying to grab flies, a baseball player trying to hit balls out of a pot, and an astronaut struggling to interpret an alien’s speech. Cues on the Touch Screen will tell you if you’re successfully on rhythm or not, and you’ll need to pass a certain amount of notes to proceed on! 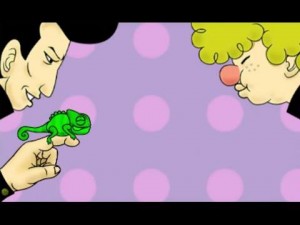 Rhythm Heaven Megamix isn’t limited to simple minigame-based gameplay either. The game includes entire themed locations, and even contains a Story Mode for the first time in the series, which lightens the otherwise stark challenge from the other play modes. For more hardcore players however, you’ll still be able to indulge in challenging tasks like Perfect Campaigns, which challenge you to pass minigames without a single mistake, and participate in the special objective-based challenges of the Challenge Train, which can even incorporate up to three other players with just one download of the game, via Download Play.

Keep grooving to Eggplante for all major news and updates on Rhythm Heaven Megamix.