If you’re a PlayStation gamer that’s understandably upset about having to wait a whole extra year to get your hands on Rise of the Tomb Raider, then good news! Square Enix is ready to make that long wait worth it, having announced when Rise of the Tomb Raider will hit PlayStation 4 today. You can purchase the game for Sony’s console starting on October 11th, just under a year after the game debuted exclusively on Xbox One and Xbox 360 last November. That’s not all either! The PlayStation 4 edition of the game is also coming in a special ’20 Year Celebration’ package, to both observe Tomb Raider’s 20th anniversary this year, and to help apologize to the PlayStation community for the extended wait. 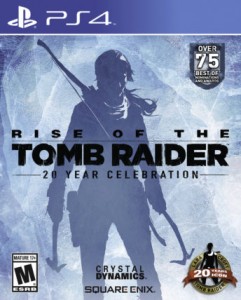 First, if you pre-order Rise of the Tomb Raider: 20 Year Celebration on PlayStation 4, you’ll get a free art book, though even those who just buy the game after launch can look forward to quite a few bonuses! The PlayStation 4 package will include all existing DLC that has been made available in the Xbox and PC renditions of Rise of the Tomb Raider to date, including story expansions like Baba Yaga: Temple of the Witch and Cold Darkness Awakened, as well as every DLC outfit, weapon and Expedition Card that was added to the game after its initial launch on Xbox platforms. The game is also adding in new polygonal Lara Croft models, inspired by the classic Tomb Raider games from the 90’s, as well as a cold weather-themed costume that is inspired by Tomb Raider III.

This new package will also come with a super-challenging ‘Extreme Survivor’ difficulty, which completely removes checkpoints in the game, a co-op-enhanced Endurance Mode, where multiple players now try to survive hunger, cold and hazards before escaping together, a mode called, “Lara’s Nightmare”, where players must defend Croft Manor from invading zombie-like creatures, and finally, “Blood Ties”, which allows players to explore Croft Manor in first-person, to find new secrets in an all-new mystery. Even better is that “Blood Ties” will also support PlayStation VR, enhancing the first-person experience for those that plan to shell out for Sony’s virtual reality headset!

Rise of the Tomb Raider was highly acclaimed by critics (our official review even awarded it an esteemed 97% overall score in its original Xbox incarnation), and sold around a healthy 2 million copies from its initial Xbox-exclusive launch in 2015, though it was also considerably outsold by its competitor, Fallout 4, which launched on Xbox One, as well as PC and PlayStation 4, on the same day. Many gamers were also rather upset about Rise of the Tomb Raider’s pointless timed Xbox exclusivity, particularly in the PlayStation pantheon, which was exacerbated by Microsoft’s initial poor communication of the exact release plans for the game. Many PlayStation gamers also assumed that Microsoft was motivated by not having a real competitor to PlayStation’s mega-hit series, Uncharted, which they believed was the motivation for the timed Xbox exclusivity for Rise of the Tomb Raider, though this speculation was never confirmed one way or the other by Microsoft.

Keep raiding Eggplante for all major news and updates on Tomb Raider.