Lucifer seemed to suffer through something of a filler episode this week, descending hard into its procedural side for a high-profile serial killer case. The show didn’t wholly abandon the ongoing conflict with Mama Morningstar in this week’s episode, “Sin-Eater”, but the supernatural aspect of the series was clearly pushed aside this week, in favour of a more human perspective of evil and punishment.

Lucifer has managed a solid case-of-the-week here and there, but it’s not often that the show’s procedural side manages to compare to its divine and comedic material. This is why the show leaning so heavily on this week’s case doesn’t consistently work to its benefit. An interesting storyline is attempted when Lucifer must deal with the idea of a serial killer that punishes their victims, forcing him to examine why he ever embraced the idea of being a punisher in the first place, though the idea feels a bit half-baked, even as Mama Morningstar points out that Lucifer is still sub-consciously trying to win God’s approval by catching criminals on Earth.

The idea behind this week’s case is fairly interesting, as grisly murders are recorded and uploaded to a fictional Facebook competitor called ‘Wobble’, though this is also a case that could have easily existed in any television procedural, with minimal connection to the story material specific to Lucifer. As usual though, at least the dark comedy was still entertaining this week, and seeing Lucifer strike up a budding friendship with new CSI, Ella Lopez this season is something that is getting more fun with each passing episode. Considering that Aimee Garcia was one of the best actors on CBS’ short-lived Rush Hour series from last season, it was very sharp of FOX to snatch her up and quickly put her in a more established comedic procedural, since Ella’s nerdy, motormouthed charm does lend itself very well to the cast of Lucifer.

As a serial killer case, there’s only a couple of victims, even if they are dispatched in some appropriately gruesome ways, and the fact that the killer ended up being the quickly-glimpsed HR rep of Wobble felt like a bit of a let-down. The co-founder is initially suspected after being framed, though she quickly ends up on the chopping block herself, and Lucifer and Chloe manage to save her, while taking out the real criminal, just in time. I feel like this is a case-of-the-week that was really let down by being constrained in just one hour-long episode, and being perpetrated by such a lacklustre killer on top of that. There’s a whole bunch of plot holes with these killings to boot, and it smacked of Lucifer giving up on this week’s case idea halfway through, and just going through the motions in the episode’s second half especially. 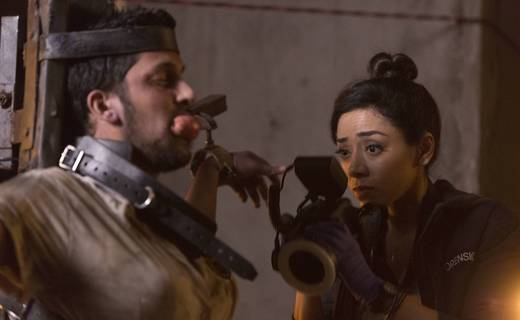 Fortunately, a few subplots do pop up, even if these storylines also feel disappointingly half-baked for the most part. Linda and Maze continue to hang out at Lux, in another surprisingly effective budding friendship that’s new to this season of Lucifer, though this doesn’t seem to go anywhere that interesting for now. Their latest hangout simply motivates Maze to tell Amenadiel to go deal with Mama Morningstar, which she probably would have done anyway. Amenadiel, meanwhile, is drinking and becoming a slob in his fake office, seemingly resigning himself to his ever-diminishing divinity. Maze puts Amenadiel back on the trail of his mother, but even this reunion feels rushed through, and mostly falls flat.

Chloe and Dan also attempt a big conflict this week, by deliberating going on a camping trip while their marriage is failing, as a means of hiding the truth from Trixie. Trixie shows up disappointingly sporadically on Lucifer at times, but her wide-eyed, adorable charm is still very infectious, and viewers will feel legitimately invested in the little girl’s feelings, even when we see so little of her. The writing is on the wall though, and as sad it is, Chloe declaring that she and Dan should get a divorce towards the end of the episode feels pretty predictable. That’s probably for the best, though I certainly hope this doesn’t further diminish Trixie’s role in the series, even if it feels like Dan is gradually being nudged into the background for this season anyway.

Regarding the continued development with Mama Morningstar, she mostly just bumbled around and exploited the ‘borrowed’ sexiness of the defense attorney she’s now inhabiting, though towards the end of the episode, she does reunite with Amenadiel, and asks him to take her back to Hell. Amenadiel however just… Doesn’t, for seemingly no reason. This does lead to a better moment, where Lucifer comes back and ‘punishes’ his mother by forcing her to remain on Earth, and masquerade as the dead defense attorney with the woman’s husband and children, though why Lucifer didn’t do that earlier, and why he and Amenadiel somehow couldn’t co-ordinate on what to do about Mama Morningstar sooner, did feel a bit illogical. I get that Amenadiel is wallowing in self-pity, but is he really so mopey that he’d just forget about the pressing issue of his mother being on Earth?

“Sin-Eater” represents Lucifer more or less phoning in most of this week’s events, and that’s a bummer. A disappointingly half-baked case-of-the-week is at least complemented by a handful of interesting character turns, but most of this week’s episode fell well short of Lucifer’s recent hot streak of great episodes, after hitting its stride about halfway through Season One last Spring. There’s still some good teases of Mama Morningstar not being totally trustworthy, especially after she discovers an ability to knock muggers flying hard into walls at the very end of this week’s episode, but for all of its big talk of punishment and sleaze, Lucifer didn’t really have the same appealing bite as usual this week. Hopefully, it’s a minor stumble, and the show will be back to its usual high entertainment factor next week.